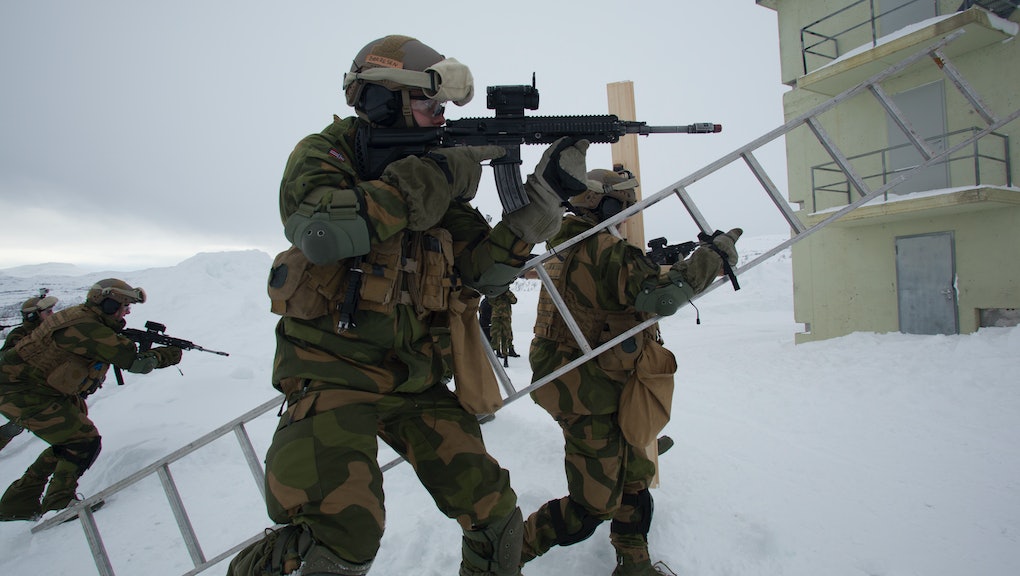 The news: In one of its most dire warnings to date, the Pentagon has released a report urging leaders to recognize that climate change poses the potential to destabilize countries, sow the seeds of violence and even cause wars. And it's not just theoretical: The paper says that a warming climate "poses immediate risks to U.S. national security" and could trigger anything from "infectious disease to terrorism."

The paper, the 2014 Climate Change Adaptation Roadmap, recommends that the Department of Defense immediately integrate climate research into its short- and long-term planning and begin preparing facilities, forces and future operations for its effects.

"Climate change will affect the DOD's ability to defend the nation and poses immediate risks to U.S. national security," it said.

Risks like: Mobilizing National Guard units to respond to emergencies, rising sea levels and threats to bases like seaside DOD complexes in the Hampton Roads area of Virginia are all cited. It also includes threats like destabilizing droughts and mass displacement of people in developing regions around the world, which could exacerbate internal conflicts.

As Mother Jones' Tim McDonnell noted, various groups associated with the military have been sounding the alarm on climate change for quite some time. A May report by 11 retired commanders cautioned that installations in Virginia could experience up to 7 feet of sea rise by the end of the century. The Pacific Institute's Peter Gleick argued earlier in 2014 that "water and climatic conditions have played a direct role in the deterioration of Syria's economic conditions," helping aggravate the country's political divisions and spawn the ongoing civil war that now involves U.S. bombing runs. And Retired Navy Rear Adm. David Titley argued that climate change will be "one of the driving forces in the 21st century" and says that inaction could result in massive and lethal extreme weather events that do damage on the level of major wars.

"Water shortages in the Middle East could benefit terrorist organizations, who can exploit hunger and unrest to tighten their grip on locals," McDonnell wrote. "Increased shipping traffic in the melting Arctic could spark political tension between polar nations. Increasing prevalence and severity of natural disasters worldwide will become a more significant burden for military-led relief efforts."

Retired Army Brig. Gen. Chris King told Responding to Climate Change that the threat posed by a rapidly changing planet "is like getting embroiled in a war that lasts 100 years" with "no exit strategy." He pointed to poor countries like Afghanistan, Haiti, Chad and Somalia as likely participants in climate-triggered conflict.

Why you should care: The May report by retired military commanders was quite pointed: We need to take potentially costly action now, or we'll pay a dear price in blood, sweat and tears later.

"Political posturing and budgetary woes cannot be allowed to inhibit discussion and debate over what so many believe to be a salient national security concern for our nation," they wrote. "Time and tide wait for no one."

Now, the military seems to be not only prepared to acknowledge the dangers of climate change but also willing to carry out a strategy to avoid the worst of it. Center for Climate and Security co-directors Caitlin Werrell and Frank Femia issued a statement reading: "The CCAR shows that the Pentagon refuses to kick the can down the road. They see climate change as an immediate threat to the nation that will have to be dealt with immediately."

The military is taking action. So maybe it's time for civilian leaders to wise up and take the lead, too. Before it's too late.