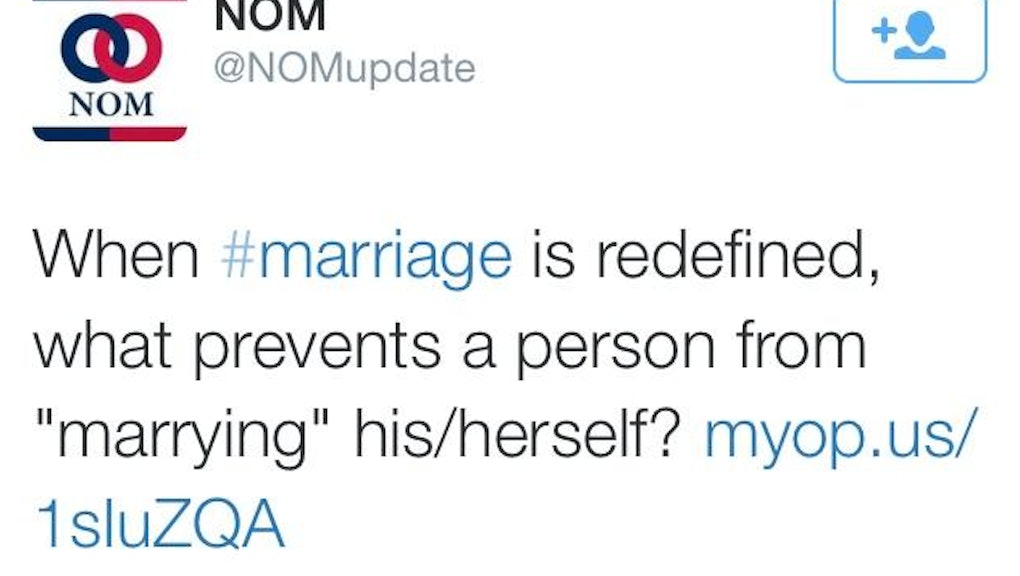 After a string of court decisions made same-sex marriage legal in nearly a dozen states this past week, it's not surprising that the "sanctity of marriage" camp might be feeling a little besieged. Indeed, the fact that momentum has clearly shifted in favor of LGBT advocates is not stopping some of the loudest anti-gay voices from mounting increasingly desperate plays for attention online.

Enter the National Organization for Marriage (NOM), a notoriously anti-LGBT organization that spent the weekend drumming up fear using the story of one London woman who recently "married" herself in a commitment ceremony. The fact that the woman was using the ceremony as to way to show her dedication towards personal growth — and not as a quest for legal recognition — seemed not to matter in the broad scheme of NOM's agenda.

In a tweet posted on Monday, NOM branded the admittedly "legally meaningless" personal ceremony with its own brand of silly:

Thankfully, the majority of people on the Internet seemed to have seen through this faulty logic, taking the moment to highlight the organization's unique breed of ignorance, lampooning the organization's wild assertion with the hashtag #WhenIMarryMyself.

Some people decided to take the idea all the way to its logical conclusion, with often humorous results:

While most of the responses have poked fun at the stodgy brand of homophobia practiced by groups like NOM, this tweet really drives the main point home: