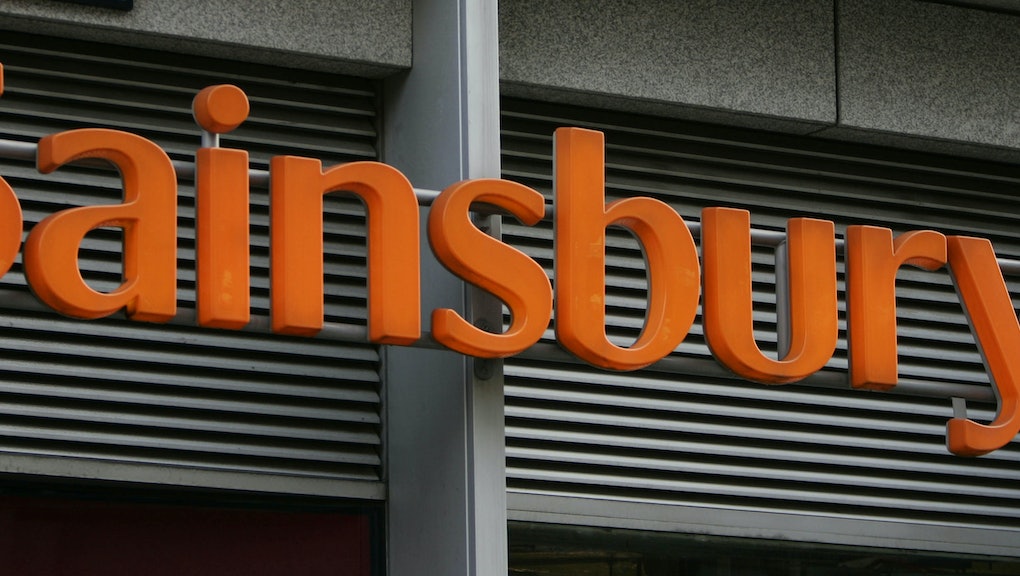 Unlike the assortment of squashes crowding the aisles at Sainsbury's supermarket this fall, homophobia, it seems, is always in season.

Twenty-two-year-old Sussex University student Annabelle Paige and her girlfriend were shopping at a Sainsbury's supermarket in Brighton, England, over the weekend when they were told to "take it outside" if they wanted to continue being affectionate in the store, reports the Times. Paige was guilty of giving her girlfriend "a very brief, light kiss," a move that "disgusted" at least one shopper enough to complain to a security guard.

Paige, speaking to theTimes, said the security guard was merely doing her job by relaying the customer complaint.

"She told us she was sorry to have said that but a customer had complained saying what we were doing was 'disgusting' and had claimed they were worried for the safety of their child," Paige said. "That word, 'disgusting,' it really resonated and shook me." The guard later allegedly confided to Paige and her girlfriend that she herself was a lesbian.

Paige understood that the security guard was not herself offended, but noted that in this case, "the other customer was in the wrong and essentially being homophobic. The guard didn't seem to understand that I was absolutely humiliated."

After Paige posted about the incident on Facebook, mainstream outlets quickly picked up her story. Facing a public relations nightmare, Britain's second-largest supermarket chain acknowledged their error with an apology. "This should never have happened. It is clear that Miss Paige and her partner were not behaving inappropriately, and we are very sorry that they were treated in this way. We have called Miss Paige to apologize and will be making a donation to a charity of her choice," a company representative told the Times.

But not everyone is convinced.

The University of Sussex's Student Union announced its plans to protest the inadequate response with a "kiss-in" on Oct. 15. "Join us to show Sainsbury's we won't accept homophobia in our society, and that we demand they do more!" urges the group's Facebook page.

Adding insult to injury is the fact that they were singled out on Oct. 11, internationally recognized as Coming Out Day. Brighton is known for being something of a "gay mecca" in England. Allegedly, Sainsbury's has been an ally in the past; a group of Sainsbury's employees participated in the local gay pride parade last year, according to Terry Wing, director of the Brighton Pride Parade, in a Facebook post. But in 2012, Sainsbury's found themselves in hot water after placing "modesty covers" over some LGBT-themed magazine covers.

So why did this happen?

While it's useless to speculate how the security guard feels about her own sexuality, a clear repercussion of living in a sexist and homophobic world is that people oftentimes comply out of fear or a sense of obligation. The lesbian security guard, in other words, did something that she didn't want to do, and would hate to have been on the receiving end of herself. This is how women and minorities police each other — and it needs to stop. The real victim here, perhaps, is the woman desperate to keep her job, no matter what it takes.