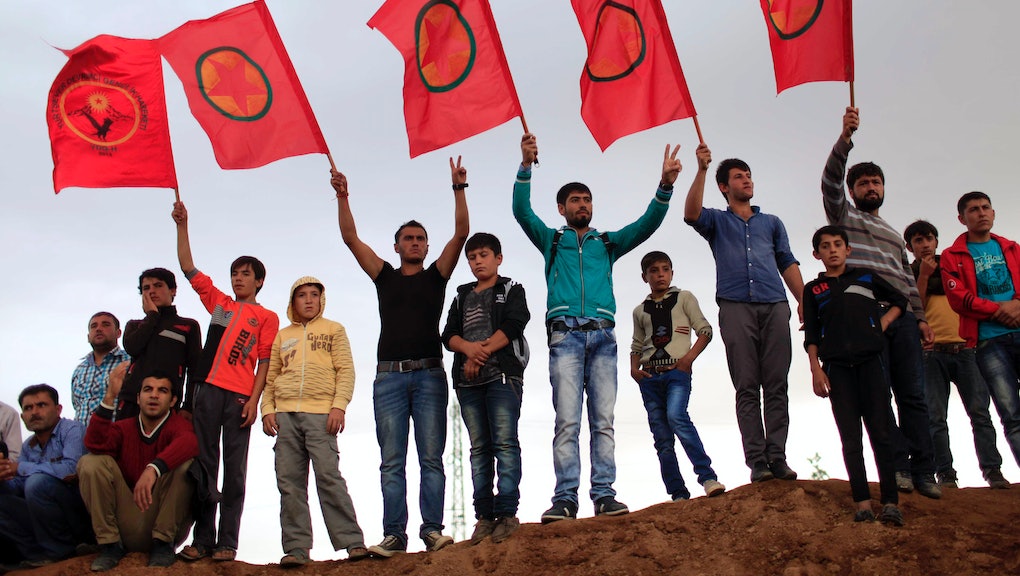 The news: Smoke rose from the Syrian town of Kobani this week as fighters from the Islamic State advanced their siege onto the predominantly Kurdish town on the Turkish-Syrian border.

The fall of Kobani to IS, analysts say, could signal a strategic and symbolic victory for the militants who would gain a 560-mile corridor along an increasingly porous border and a direct link to its strongholds in Aleppo and Raqqa. It could also reflect a wider win against U.S.-led efforts to degrade and destroy their power.

IS fighters began their siege of the town in mid-September. They have advanced towards the center of Kobani in recent days and have also hoisted their black flag over the town.

Nearly 200,000 refugees have already fled Kobani for neighboring Turkey, yet 700 are still trapped inside. If the Kurdish fighters are not given support or if Turkey, whose army is NATO's second largest, does not send ground troops or open its borders, the remaining people, the UN Syria envoy warned, will be massacred.

How does Kobani play a strategic role in the region and wider fight against IS? The town is a gateway into Turkey. On a hilltop overlooking Kobani on the Turkish side of the border, a barbed wire fence and half a mile separate Turkey's tanks and the raging battle between Kurdish and IS fighters.

"We want them to open the corridor so that our people can come and help us. We need many things," Esmat Al-Sheikh, head of the Kobani defense authority, told Reuters. "We are in need of fighters, in need of everything."

To counter the IS advance, U.S. and coalition forces have for the last two weeks bombarded IS staging grounds. But the airstrikes are becoming ineffective as IS spreads its fighters across the town.

The U.S. has repeatedly said that preventing more cities across Iraq from falling to IS is its highest priority, not Kobani. The coalition's campaign in airstrikes is very limited and sending ground troops has been ruled out.

"Kobani is one community, and it's a tragedy what is happening there," U.S. Secretary of State John Kerry told reporters in Cairo on Sunday.

"We have said from Day 1 it is going to take a period of time to bring the coalition thoroughly to the table to rebuild some of the morale and capacity of the Iraqi army and to begin to focus where we ought to be focusing first, which is in Iraq."

But letting Kobani succumb to IS will expand the jihadists' territory and weaken Kurdish control of the oil-rich northern region.

Why is Turkey so reluctant to get involved? It wants to prevent Kurdish independence at all costs, critics say. Without Turkey's backing, Kobani will fall to IS.

In a speech last week, Turkish president, Recep Tayyip Erdoga said his country had already done enough by allowing 200,000 refugees into the country.

"What more do you want?" he asked of critics. What they want is for Turkey to provide military support and use its tanks perched on a hilltop overlooking Kobani.

Erdogan's refusal to open the borders to bring weapons and supplies to Kurdish fighters has angered the 15-million Kurds living in Turkey. Last week, Kurds rose up in protest across the country, resulting in the deaths of 21 people during clashes with the Turkish government.

"Turkey wishes to create its own buffer zones inside the Syrian border area to accommodate new refugee flows and deny the Syrian Kurds territorial self-rule," Katherine Wilkens, the deputy director of the Middle East Program at the Carnegie Endowment for International Peace, wrote of the muddled situation.

Others are also critical and simply confused about the lack of Turkey's action against IS in Kobani.

The takeaway: Pressure from the U.S. and Europe has done little to change Turkey's involvement. As thousands of refugees flee the violence, stories of the carnage are now being told.

"IS came into the villages. They beheaded people as well as animals," Belal Shahin, a Kobani refugee in Suruc, Turkey, told MSNBC. "Even animals don't do what IS are doing. They are doing these things and it's not acceptable. But the whole world has blocked their ears in order not to hear. And they've become dumb. There's nothing to stop them."