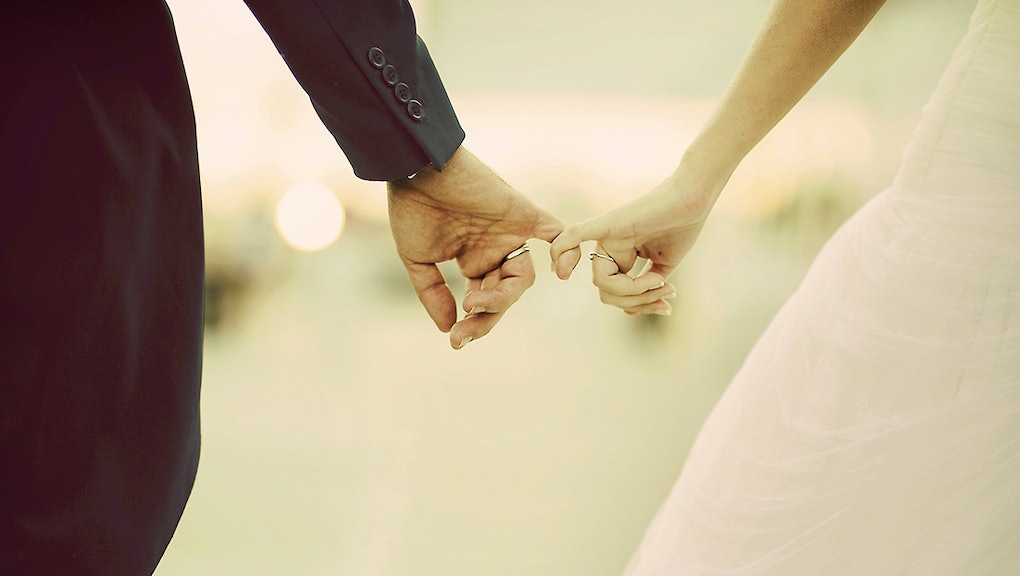 What makes for a good marriage?

The news: A recent study by Emory University researchers Andrew Francis and Hugo Mialon may have found out. Waiting to put a ring on it for at least a year or two (or even three) is a big plus. Strong, shared religious values are apparently a bonus. And money, of course, doesn't hurt. A huge wedding? Bingo. But an expensive wedding? Watch out.

The study: Francis and Mialon surveyed over 3,000 married couples, attempting to find links between different variables and the length (or continued survivals) of their marriages.

Data scientist Randall S. Olson visualized the results in a series of graphs, which you can see below. The first shows that while marrying for the money makes it moderately more likely couples will end up divorcing, marrying for looks increases the odds by a stunning 40%.

The very poor are more likely to divorce than the wealthy, though there are diminishing returns to increasing wealth until you hit the really big bucks. Middle-class couples earning between $50,000-125,000 differ little from one another.

Dating for three or more years seems like a safe bet ...

... as does inviting a whole lot of people to your wedding:

But the more you spend on the wedding, the more likely it is that you'll get a divorce:

Finally, don't skip the honeymoon — couples who had a post-marriage vacation together had a 41% lower chance of divorcing.

Why you should care: As the Atlantic's Olga Khazan writes, a strong marriage appears to be an "intentional one" that coincides with strong external support and financial good fortune.

For example, dating for years beforehand decreases the odds of a partner mismatch, while well-attended weddings likely indicate the couple have a large mutual base of emotional support from friends and family as well as loved ones with an investment in supporting their marriage. The comparative success of higher-income couples probably reflects the tendency of economic insecurity to destroy pairings; money is the most common cause of arguments in a relationship, so it makes sense that the financially well-off would last longer than their poorer counterparts.

Spontaneous, drive-thru marriages in the name of love? They're probably not gonna work out. Wait to put a ring on it.