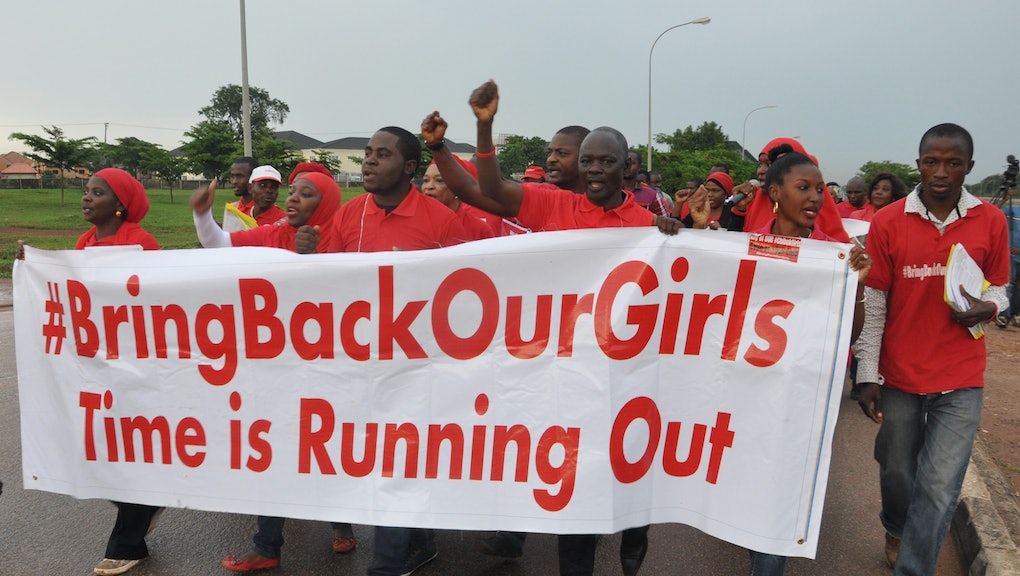 Did You Forget All About #BringBackOurGirls? Nigerians Didn't

The news: Just a few months ago, the kidnapping of nearly 300 Nigerian girls by the terrorist group Boko Haram was a cause célèbre: There was the ubiquitous hashtag (#BringBackOurGirls), celebrity supporters (some misguided) and political pressure from the international community. And then, just like every other viral movement, it faded from public view.

Much like the #Kony2012 campaign, #BringBackOurGirls seemed to highlight the worst of hashtag activism: People's tendency to jump on a viral bandwagon until the next media-ready cause rolls into town.

Just look at how much use the #BringBackOurGirls hashtag has gotten in recent months:

Now compare that to the attention being paid to the Islamic State (in red, with #BringBackOurGirls still in blue):

But the fight is far from over. While dozens of girls have escaped from Boko Haram's hands, more than 200 are estimated to remain in captivity. And while the Twitterverse may have moved on to other causes, the parents of these kidnapped girls are still pressing the Nigerian government to find them.

Since the kidnapping, the girls' parents and community members have been protesting daily. On Tuesday, they took the protest to Nigerian President Goodluck Jonathan's villa, calling on the government to step up its efforts. Authorities have been reluctant to pursue a military operation over concerns that it might endanger the kidnapped girls' safety, but after six months, patience is running low.

"As far as our girls are concerned, they have been abandoned," Mkeki Mutah, an uncle of two of the kidnapped girls, told Al Jazeera. "There is a saying: 'Actions speak louder than words.' Leaders from around the world came out and said they would assist to bring the girls back, but now we hear nothing. The question I wish to raise is: Why?"

"I want the president to try and bring back my friends," Rebecca Ishaku, one of the girls who managed to escape from Boko Haram, told Reuters on Tuesday. "I can't even imagine what's happening to them."

This is why hashtag activism needs to get better. While it might be tempting to pat yourself on the back after posting one tweet about a social campaign or throwing a bucket of ice water on yourself, it's important to question whether these viral movements translate into action. As #BringBackOurGirls shows, a catchy hashtag does not mean people won't lose their interest after a couple of months.

The ongoing situation in Nigeria is a nuanced one, and one hashtag does not capture that reality. Boko Haram continues to act with impunity (kidnapping more women and murdering boys), and while the news cycle might demand our attention elsewhere, these girls deserve more than a buzzy hashtag that fizzles out after a couple of months.