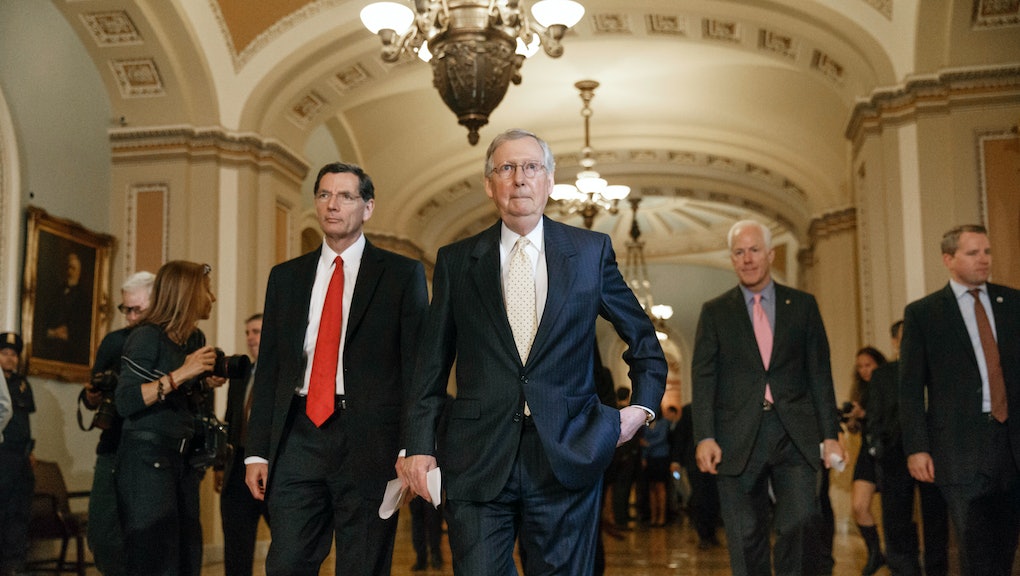 The Top Senate Republican Has No Clue How Obamacare Actually Works

Sen. Mitch McConnell, the Republican minority leader, took the stage for a debate earlier this week with Democratic challenger Alison Lundergan Grimes and suggested he would seek to repeal Obamacare, but that Kentuckians insured through the website designed to provide access to its marketplace could keep their coverage.

The success of Kentucky's state health care exchange, set up as part of President Obama's Affordable Care Act, has become a sticky political issue for the man who has a good chance at becoming Senate majority leader in 2015. Kynect was one of the few online registration portals that functioned when Obamacare open enrollment began a year ago. An estimated 500,000 people in Kentucky have obtained insurance through the website, which was green-lit by Democratic Gov. Steve Beshear.

"'Kentucky Kynect is a website," McConnell said Monday night. "It was paid for by a grant from the federal government ... The website can continue, but in my view, the best interests of the country would be achieved by pulling out Obamacare root and branch."

When asked how he squared those two statements — getting rid of Obamacare and allowing the website to "continue" — McConnell said he thinks it's "fine to have a website" and was OK with leaving decisions about its future to state officials.

This is on par, logically, with proposing to get rid of all the teachers, while keeping the buses running and schools open. Kynect is a way for insurance-seekers to enter into a regulated market. The site is a yellow bus taking them there. Without Obamacare on the back end, people accessing a website like Kynect would arrive at an empty schoolhouse, like they did before the law was passed.

[P]rior to Obamacare, the non-group market was dysfunctional. It excluded and priced out the sick and poor. It offered decent plans to young people who posed minimal health risks, but also sold junk policies that left people who believed they were doing the responsible thing exposed to medical bankruptcy.

There's nothing here that McConnell doesn't know or understand perfectly well. Like so many politicians from both parties, he is trying to use public ignorance to his advantage. Kentucky is the only Southern state to fully embrace Obamacare, opening its own exchange and expanding Medicaid. The state's residents have also been, not coincidentally, some of the law's biggest beneficiaries. McConnell realizes this, so he has to make a different argument. And this, apparently, is the best he could do.