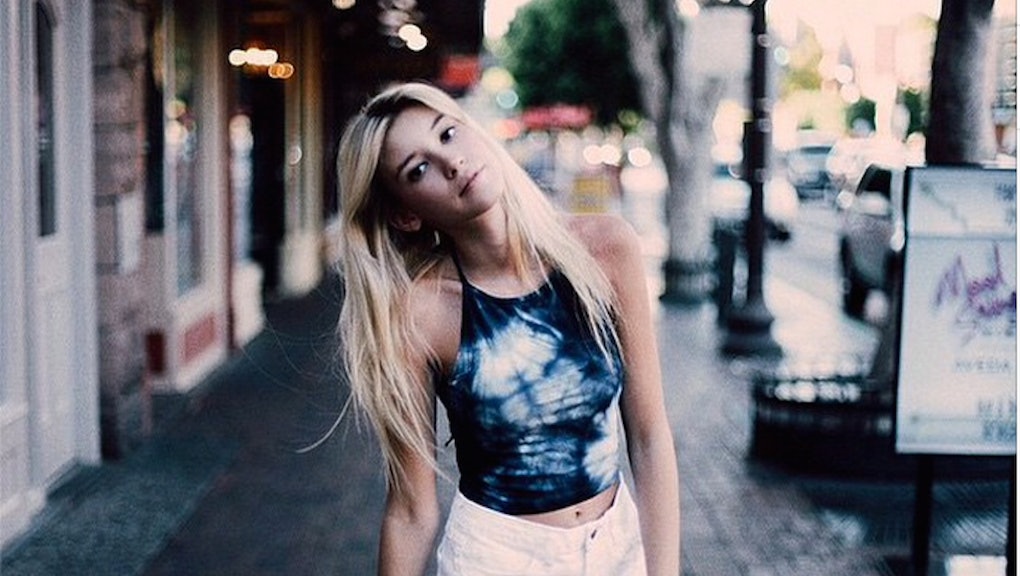 Brands like Abercrombie & Fitch have long sent the message that the only people who can wear their clothes or work in their stores are the "cool kids," a distinction that's largely been reserved for thinner, fair-skinned young people.

And though Abercrombie has endured financial losses and intense public scrutiny after admitting its dubious standards, parts of its business model have been emulated by brands around the world. The latest example of this is an up-and-coming clothing line that seems determined to shrink — literally — the definition of beauty for young girls across America.

Meet Brandy Melville, a retail chain where threads are almost exclusively made in a single size, one they claims "fits most:" a small. Unfortunately, there is no such thing as a universal size, especially not the one worn by its band of homogenous models. Its Instagram account is clear: At Brandy Melville, only thin is really "in."

According to the Huffington Post, Brandy Melville is one of the fastest-growing brands popular among teenage girls, ranking well ahead of established stores like H&M, American Eagle and Hollister, as measured by market research firm Piper Jaffray. But unlike its competitors, Brandy Melville, which came to the U.S. from Italy in 2009, isn't interested in catering to any woman whose size or body shape doesn't fit a very restrictive idea of what "most" people can actually wear.

This stance is more extreme than Abercrombie & Fitch, which resolved to offer "plus" sizes in their stores following controversial comments made by former CEO Mike Jeffries about the brand's exclusive image.

On Brandy Melville's website, only a few items are available in "medium" and "large" sizes, but it's all relative: A waist that spans 15 inches across is as big as any skirts or pants will come. Although the store's options are generating a cultlike following on social media, many women are less than impressed:

So far, Brandy Melville executives show no sign of budging.

In an April interview with USA Today, one of the people responsible for bringing the chain stateside said he would love for everybody to shop at Brandy Melville, but that they can "not satisfy everybody."

"The one size fits most clothing might turn off somebody if they don't walk into the store, but if you walk in you'll find something even if it's a bag," said Jessy Longo, a store owner and close friend of one of Brandy Melville's co-founders. "We just focus on making clothes and try to do our best ... not the political stuff. We aren't focused on branding a certain model or branding one race and we don't seek out a certain type of look."

Apparently store officials believe that body positivity is merely a "political" consideration, not something that has real-world implications for the health of America's youth. Data suggest otherwise, however. According to the National Association of Anorexia Nervosa and Associated Disorders, one-half of teenage girls engage in unhealthy weight control behaviors such as skipping meals, fasting, smoking cigarettes, vomiting and taking laxatives. There's no way to look at those numbers and not think about the toll social messaging is taking on body image.

In an open letter to the chain posted on the Huffington Post in the spring, Los Angeles high school student Lani Renaldo noted how frustrating it felt to not fit into clothing supposedly modeled on the ideal body type. "It doesn't ever feel good to be an outcast and by not offering several sizes, or opening up to a different array of models, this company is separating and almost purposely making the girls with chests and curves feel like minorities and outcasts," Renaldo wrote. "It is important to me, to be a leader in this cause and as a girl that doesn't necessarily share the same body type as a majority of my friends, I think it's important for girls to be able to embrace our bodies and be okay with whatever size or shape they we are."

Only time will tell if Brandy Melville changes course, but the brand may learn the hard way that this kind of  body-shaming is never in style for long.