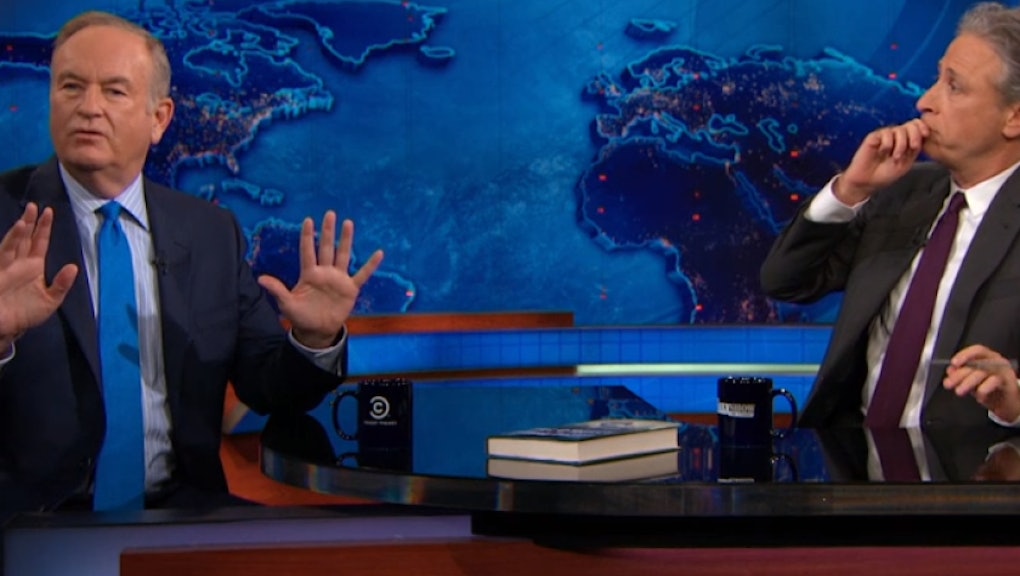 Jon Stewart welcomed old sparring partner Bill O'Reilly to the Daily Show on Wednesday night with a simple request: "I want you to admit that there is such a thing as 'white privilege.'"

It went about how as well as you'd expect.

O'Reilly responded with his stock argument: "If there's 'white privilege,' then there has to be 'Asian privilege' because Asians make more money than whites."

At about that point, Stewart interjected to suggest that his guest was "missing the point."

You really have to watch the whole segment for yourself:

O'Reilly conceded that, yes, this might have been the case — in the past — but no more.

"There is no slavery, there is no Jim Crow," he said, prompting Stewart to quietly take O'Reilly's book, which he was on to promote, off the desk and ditch it underneath.

Stewart's challenge came in response to an O'Reilly segment from late August, when the Fox News anchor — Ferguson, Missouri, protesters in mind — said he rejected the concept of "white privilege" and, like Wednesday night, pointed to the relative success of Asian-Americans as proof.

O'Reilly, of course, conveniently misses or ignores the big picture. He never quite answers the real question posed, usually accepting the premise on some basic level, then oh-so-cleverly tacking back to say something like, it's easy to make it in America "if you're an honest person." That's his schtick. His audience loves it.

And as long as millions continue to tune in, he's unlikely to make any meaningful concession to anyone or thing, be it Stewart or the truth.