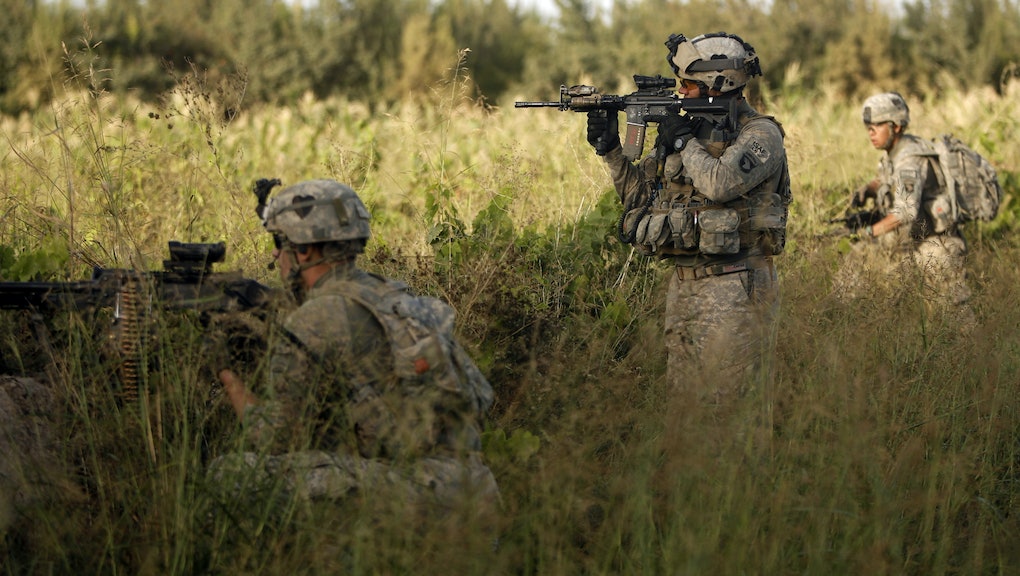 In a still-classified internal review, the CIA detailed how its previous efforts to covertly arm and train insurgents around the world were rarely successful. The report strongly suggests the agency's 67-year history of clandestine operations should inform the Obama administration's not-so-secret efforts to vet and create a Syrian rebel force to fight the Islamic State and the military of Syrian President Bashar Assad.

In spite of the CIA's uncharacteristic soul-searching, the Islamic State's territorial takeovers and horrific violations of human rights add pressure and expediency to the decision to arm and support a moderate Syrian rebel force.

Syrian rebel fighters already confirmed in 2013 that they were being secretly armed and trained by the U.S. The mission was to train 5,000 rebel troops every year. The PBS documentary Syria Behind the Lines filmed weapons being transported and rebels recalling their training programs in Saudi Arabia.

Arming and training rebels is essentially a proxy war. In the case of war-torn Syria and Iraq, it's an effort to prevent the deployment of U.S. and coalition ground troops.

"One of the things that Obama wanted to know was: Did this ever work?" one former senior administration official, who was present in the debates and spoke anonymously because of the classified nature of the report, told the New York Times.

Though it's unlikely the CIA will release its review, a few failed past military efforts probably featured in the PowerPoint presentation given in the Situation Room. These three bloody examples could change the calculus of the wars in Syria and Iraq.

In 1961, the CIA financed and trained a group of Cuban refugees, mostly from Miami, to topple the communist government of Fidel Castro with a ground invasion supported by CIA-supplied B-26 bombers. At the onset, the paramilitary troops, numbering 1,400, overwhelmed local militia after landing at the Bahía de Cochinos (Bay of Pigs) on the southern coast of Cuba, but Castro's forces defeated the troops in just three days.

The failed invasion was an embarrassment for U.S. foreign policy. It also strengthened Castro's resolve to adopt socialism and cultivate stronger ties with the Soviet Union. The defeat made President John F. Kennedy, then only three months into his presidency, look weak at the height of the Cold War. It set a dangerous precedent. Though Kennedy helped avoid a nuclear war later on during the Cuban Missile Crisis of 1962, his faux pas with the Bay of Pigs operation is indelibly seared into military minds. It's emblematic of serious U.S. military blunders, and it underpins every strategic decision the U.S. makes.

The Banana Wars were not a food fight. The Somoza family, a political dynasty that came to power in Nicaragua after U.S. occupation ended in the early 1930s, ruled the country until the Nicaraguan Revolution in 1979. The regime was propped up by strong U.S. support for the government's military in the form of arms, aid and training. A U.S. company called United Fruit also had a strong hand in convincing the U.S. to preserve its commercial interests, a decades-long economic battle.

Thousands of Nicaraguans, both civilian and military, died when the revolution came. The "contras," the rebel forces, battled against the Sandinista Junta of National Reconstruction, also known as the Nicaraguan government opposition.

In its effort to support the government, President Jimmy Carter's administration transported Sandinista commanders in airplanes with the markings of the Red Cross, which is considered a war crime. The efforts didn't really help: "Despite astronomical levels of military support, the United States failed to create a viable military force in Nicaragua," wrote author Noam Chomsky in his book What Uncle Sam Really Wants.

After U.S. support was banned by Congress, President Ronald Reagan covertly continued it until these activities culminated in the Iran-Contra Affair. According to Human Rights Watch, the contras "were major and systematic violators of the most basic standards of the laws of armed conflict, including by launching indiscriminate attacks on civilians, selectively murdering non-combatants and mistreating prisoners." All funded by U.S. dollars.

The CIA review on failed counterinsurgencies did find one exception: Afghanistan. In the 1980s, the CIA funded and trained mujahedeen rebels to fight Soviet troops. The operation successfully weakened the Soviet military's grip on the country and resulted in their withdrawal in 1989. The proxy war was successful, the CIA report says, as reviewed by the New York Times, "largely because there were Pakistani intelligence officers working with the rebels in Afghanistan."

But fast-forward a decade and the battle-hardened mujahedeen fighters had formed al-Qaida, making Afghanistan its base to plan the Sept. 11, 2001, attacks. "This only fed concerns that no matter how much care was taken to give arms only to so-called moderate rebels in Syria, the weapons could ultimately end up with groups linked to al-Qaida, like the Nusra Front," the New York Times notes.

A cautionary tale: If there's one consistent pattern in U.S. military history, it's that the U.S. sometimes chooses a lesser evil as allies for accomplishing its political goals. The cautionary tales in the CIA's review may influence the Obama administration's decision, but for now, it appears that arming and training Syrian rebels is the only companion to air strikes the U.S. is considering.