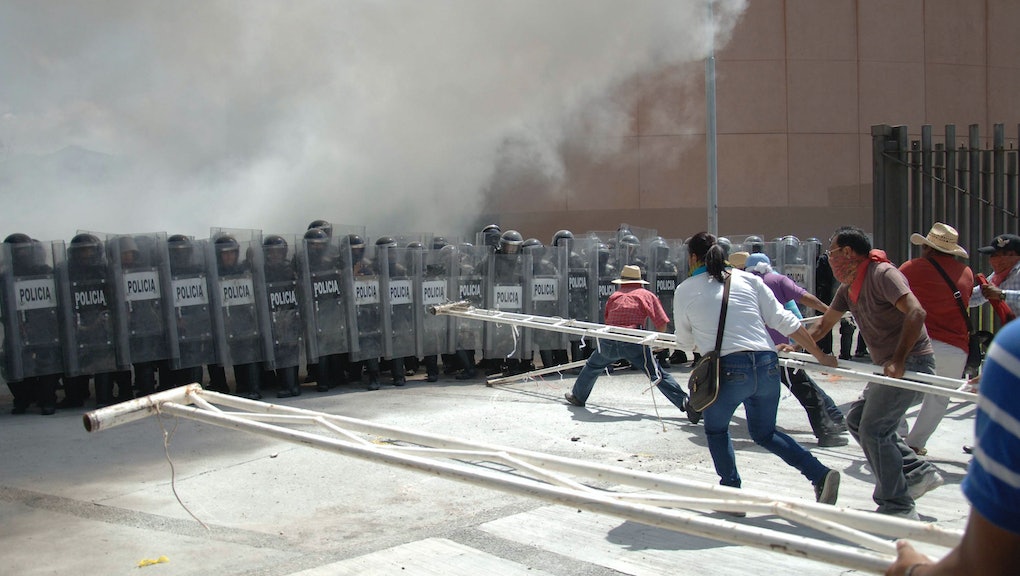 Powerful Photos Capture the Student Protests Barely Anyone Is Talking About

While the world has focused its attention on the pro-democracy protests in Hong Kong, there's another student movement gaining steam on the other side of the world.

The unfolding protests gripping Mexico began in the small town of Iguala, in the southwest region of Guerrero state, where the disappearance of 43 student teachers on the night of Sept. 26 has sparked outrage amid allegations of collaboration between local police and organized crime.

"Iguala is just one example of the level of decay in state and municipal security institutions," Duncan Wood, director of the Mexico Institute at the Woodrow Wilson Center in Washington, D.C., told the Washington Post.

Witnesses belong to a local gang, which federal authorities claim has infiltrated the local police department. The police apprehended 17 students from a local teachers college, according to the gang. They were then escorted through a rugged hill, killed and buried.

The 17 students are among the 43 who disappeared in late September.

More than 22,000 people have gone missing in Mexico in the last eight years, according to a list of names the Mexican government holds. Local police claimed that 28 corpses recently exhumed from a mass grave did not belong to any of the missing victims from Iguala's teacher's college.

Despite this horrific incident, the outcry in Mexico has been largely overshadowed by Hong Kong, according to Google Trends:

Now, Mexicans are insisting that their outrage be heard by both government officials and the international media. Protesters took to the streets of the Guerrero state capital this week to demand answers, holding mass demonstrations there and across the country.

College students in Guerrero state burned a portrait of the state's governor, Angel Aguirre, before they set the capital building on fire.

Most of the demonstrations involve fire and destruction; peaceful protests are also taking place across the country this week. On Oct. 14, Attorney General Jesus Murillo Karam announced that none of the 43 missing students were among remains found in the first mass graves. Following the announcement, students in Mexico City gathered and chanted outside of Karam's office to demand an investigation.

Students held a banner with the faces of the 43 missing student teachers from the Isidro Burgos rural teachers college. The banner reads "Iguala, cradle of murders."

Teachers clashed with riot police in front of the Guerrero state capital building.

In Mexico City protests, a woman wore a black veil and held a sign bearing the words "Assassin State," referring to the state of Guerrero.

A student spray-painted, the words "Repressive State" onto the window of the attorney general's office.

Protesters demanded the resignation of President Enrique Peña Nieto in a mass protest in Mexico City this week. The federal government has yet to give an explanation about the disappearance of the 43 student teachers.

Relatives of the missing marched with candles and flowers in Mexico City.

Activists of Amnesty International earlier this month demonstrated with a candlelit vigil on the streets of Mexico City.

Omar Garcia, one of the witnesses in Iguala, recalled what he saw that evening for the BBC. "We think the municipal police took them," Garcia wrote. "What we think happened is that they kept them somewhere and then, as we say, 'disappeared' them - like so many thousands of others in this country who are missing."

The search continues for the 43 students.