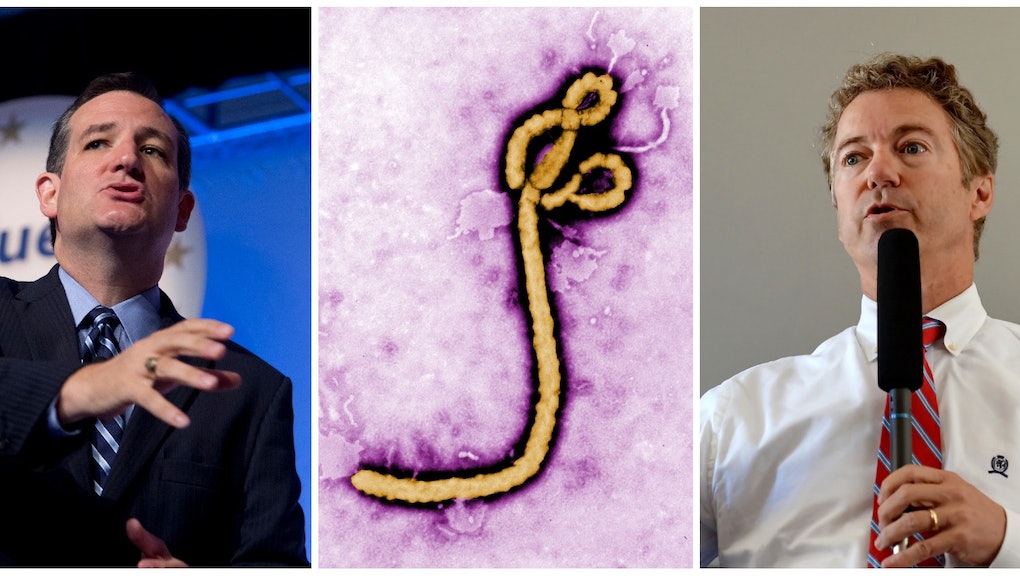 Here's the problem: You've got an election coming up, but all anyone is talking about is Ebola. People don't really understand it and many are frightened. What do you do?

As economist Paul Romer once said: "A crisis is a terrible thing to waste."

The answer, of course, is to turn people's attention away from pesky distractions — like, say, medical science, international aid and general logic — and instead get people to focus on how the Ebola epidemic signifies a failure by your opponent, the other party, the Centers for Disease Control and Prevention, the U.N., and, of course, President Obama. After all, what good is a deadly disease if you can't wring a few sound bites out of it?

Want to politicize Ebola for personal and professional gain? Here's how.

Tie it to your campaign issues, no matter how irrelevant they may be

Once you decide to politicize Ebola, you're going to come to a realization: There's just not too much for a potential senator or governor or whatever you're running for to do about it right now. Sure, you can call for travel bans from affected countries, but that's probably not going to do any good.

So what do you do? Pick something you (and your voters) feel strongly about and just insert Ebola. Don't worry if it doesn't make sense! Take Republican Scott Brown, who's running for Senate in New Hampshire. He cares about closing the border. On the one hand, the U.S.-Mexico border is illegally crossed by immigrants from countries south of us and has pretty much nothing to do with the African countries seeing Ebola outbreaks. But on the other hand, who cares?

"I think it's all connected. For example, we have people coming into our country by legal means bringing in diseases and other potential challenges. Yet we have a border that's so porous that anyone can walk across it. I think it's naive to think that people aren't going to be walking through here who have those types of diseases and/or other types of intent, criminal or terrorist."

Brown isn't the first person to try to score political points on immigration using the Ebola epidemic. The North Carolina Senate nominee Thom Tillis claimed the U.S. should close the border with Mexico to prevent the spread of Ebola. Republican Sen. Rand Paul of Kentucky suggested that Ebola could enter the United States through Mexico. And back in July, Georgia Rep. Phil Gingrey said there were reports of immigrants from Mexico and Central America carrying Ebola into the United States.

There's one problem: There have not been any cases of Ebola reported in Canada or Central America so far.

But hey, don't be shy about jamming Ebola into your favorite topic. Love foreign policy? Maybe the Islamic State is using Ebola! Hate unions? Maybe they spread Ebola! Think taxes are too high? Maybe taxes are what caused Ebola! Experiment with your favorite combinations and see what works best.

In order for people to be scared of Ebola (and therefore scared of immigration or terrorism or whatever you decided on in the previous step), you need to hammer home that it's already a disaster that the current leadership is incapable of handling.

The best way to do this is to look down on federal officials who are working on containing the disease in the U.S. Take the CDC, which recently announced that there was little risk of an outbreak and that people should not be afraid of travelers or airplanes in general.

And sure, the federal government just announced airport screenings to keep Ebola from entering the U.S., but don't let that stop you from stoking fears of some sort of cover-up or whatever:

Lest you think this only works for one side of the aisle, you can always follow the example of this liberal political group and blame Republicans for Ebola because they recommended cuts to the CDC budget. The Agenda Project Action Fund claimed that "Republican cuts kill" — blaming the lack of CDC funding for exotic disease research lies in Republicans' obsession with 'starving the beast' — but that's simply not true:

Whose idea was sequestration? It was originally a White House proposal, designed to force Congress to either swallow painful cuts or boost taxes. The law mandating sequestration passed on a bipartisan vote — and then Republicans embraced it even more strongly when they could not reach a grand budget deal with President Obama.

That way, everyone can argue about whose cuts are whose instead of dealing with the actual crisis at hand. You can't win Ebola if you don't play!

If all else fails, wave your hands and yell about conspiracies.

If you've gotten this far and you're still not getting enough attention for your Ebola talking points, you're probably a bad politician or a cable news host. (In all likelihood, you were one and now you're the other.)

Fear not, there's still a slice of the Ebola pie for you. You're going to want to insinuate that the disease showed up in the U.S. because someone let it happen, or maybe that the government is covering something up about the risk. Don't get specific! Much like art, a good conspiracy is a conversation between the creator and the audience — give them a wink and let them fill in the blanks themselves.

Take former presidential candidate and current man-with-a-TV-show-named-after-himself Mike Huckabee, who had this to say about Ebola: "If people don't trust our leaders, the people aren't to blame. We were told we could keep our doctors and insurance and pay $2,500 less. That Benghazi was caused by a YouTube video. ... Trust is something you gotta earn and once squandered, it's hard to get back."

For a more direct route, you can follow in the footsteps of Fox News contributor Keith Ablow, who declared that Obama "may literally believe we should suffer along with less fortunate nations," or American Family Association spokesman Bryan Fischer, who said that the president seems like he "wants Ebola to come to the United States to punish America for being racist."

The bottom line: If you follow these steps, you should be well on your way to getting your tired political jabs on the news by adding Ebola and further frightening people who are more and more worried about the disease. Just make sure they leave the house to vote for you in November! Or, if they're not going to vote for you, make sure they stay home. After all, those voting booths might have Ebola.