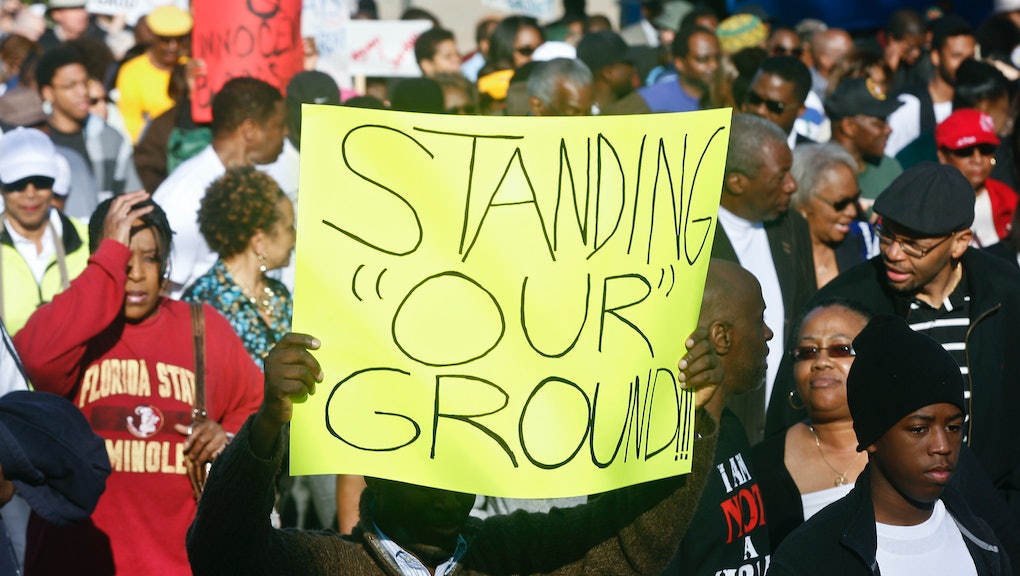 Sorry, Domestic Violence Victims: South Carolina Doesn't Have Your Back

The news: If you're a victim of domestic violence in South Carolina, "stand your ground" laws might not apply to you.

The state is one of at least 20 with far-reaching statutes that authorize individuals to use deadly force in self-defense. For instance, the law has provided immunity from prosecution in the killing of an unarmed teenager in Columbia. However, prosecutors are asserting that it doesn't apply in the case of a woman who killed her abusive boyfriend in self-defense.

The context: The case of Whitlee Jones is at the heart of this latest debate in the Palmetto State, where opponents of the statute are using it as a prime example of the law's misguidedness. The facts that almost everyone can agree on are these: In November of 2012, Jones was dragged down the street by her hair and beaten by her boyfriend. Hearing her screams for help, a neighbor called 911. A short while later, Jones was confronted by her boyfriend again and she stabbed him once in self-defense. He died and she was charged with murder.

It took two years after Jones' arrest for the judicial system to conclude that she had the right to kill her attacker under the state's Protection of Persons and Property Act. But prosecutors are now crying foul, claiming the state's "stand your ground" law does not apply to domestic disputes. Assistant Solicitor Culver Kidd explained his office's reasoning to The Post and Courier thusly:

"We believe that applying the statute so that its reach into our homes and personal relationships is inconsistent with (its) wording and intent."

In other words, a woman's right to protect her life is not as important as a man's?

This is not an isolated incident. Victims of domestic violence are being charged with murder across the state — and country. According to the Post, Jones is the first of three women in Charleston to be "charged with murder during the past two years after stabbing a boyfriend or a roommate she said attacked her." And, while occurring in a different state, it's hard not to draw parallels between these incidents and the case of Marissa Alexander, who received 20 years in prison for firing warning shots to ward off her abusive husband. She is slated for a retrial Dec. 1.

The Post's Andrew Knapp posits the problem lies within the wording of South Carolina's statute, which is the basis of the appeal: "It says that people should be expected to fear for their lives if someone is breaking into their home, their car or their business. Most people in those situations can defend themselves. But if people share their home with the target of their force, they don't have that 'presumption' of fear, the law says."

But prosecutors are ignoring the everyday reality of domestic violence victims. Although historically hidden behind closed doors, this type of abuse is endemic, with 1 in 4 women experiencing domestic violence in her lifetime. Many victims of domestic violence do in fact live in fear, and for good reason: Nationally, one-third of female homicide victims are killed by their partners.

When you zero in on South Carolina, the picture becomes even more upsetting. In 2013, the state ranked No. 1 for murders of women by men, more than double the national average. In its seven-part series, Till Death Do Us Part, The Post revealed the ways South Carolina appears reluctant to take domestic violence seriously.

More than 300 women have been shot, stabbed, strangled, beaten, bludgeoned or burned to death by men in South Carolina over the past decade, dying at a rate of one every 12 days, while the state does little to stem the carnage from domestic abuse.

But why? As Mic's Marcie Bianco previously noted: "The state's conservative and religious mores, coupled with its lax laws on domestic violence and guns in particular, contribute to this perfect storm. ... Gendered violence thrives in environments where women are subjugated and encouraged to keep marital matters private. Add to this a conservative ideology that looks down on divorce, and you have a volatile mix. "

For years, South Carolina has fostered a culture of violence against women, failing them legislatively, judicially (as in Whitlee Jones' case) and socially. Despite being the state with the most incidents of domestic violence, the state only funds 13 programs with 17 emergency shelters.

If we're going to reduce domestic violence, we need lawmakers' support. It's myopic to create a law with only one type of victim in mind; George Zimmerman should not be the poster child of a "victim" in America. If we must have "stand your ground" laws, they must be applied evenly and fairly, taking into account people's varying experiences with violence and fear, whether that's on the street or in the home.