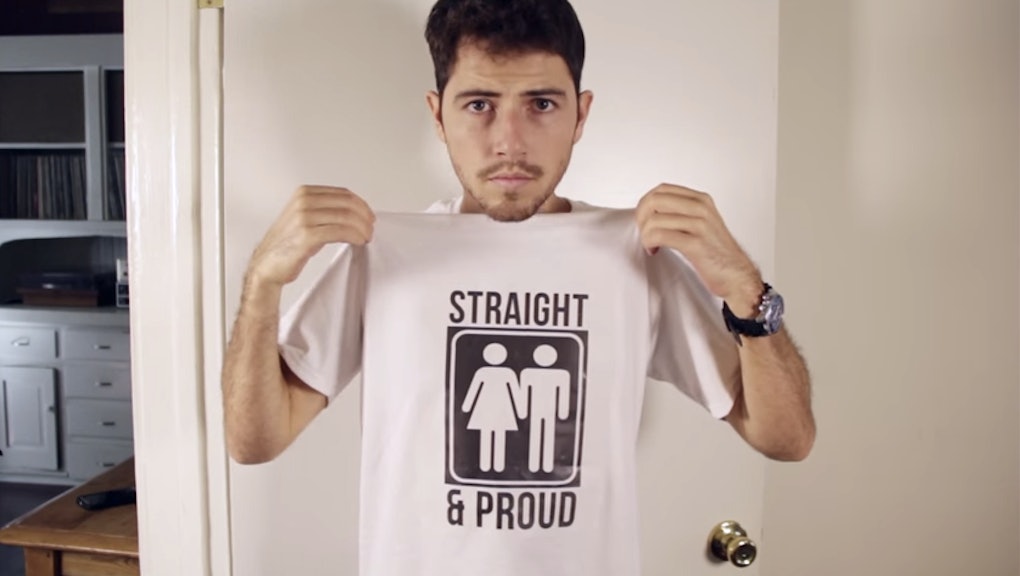 If Straight People Had to Come Out, Here's How Absurd It Would Sound

Following last week's National Coming Out Day, Buzzfeed has created a new video, "If Straight People Had To Come Out," that illustrates the challenges of coming out for gay people through the site's now-familiar use of comedic role reversal.

While the video takes a humorous spin on the issue, coming out is a game-changing moment for gay people, one in which they publicly announce their sexual orientation. It is at that moment — which usually has to be repeated in every new social or professional situation — they know whether those around them accept them. So coming out, in this regard, is usually done more often for others. It also reveals the extent to which our personhood depends on the recognition and respect of others.

"I just don't want you to go to hell because you chose to be straight!" exclaimed a mother in the Buzzfeed video, highlighting not just her personal bigotry but also the fact that Americans tend to make others' sexuality about themselves. Long before Freud or Foucault, humans have been fascinated by sexuality, but it's only in modern times that we think other people's sexual practices directly affect our personal lives. (Hence the "big gay storm" of gay marriage, or this guy blaming "fat lesbians" for the spread of ebola. Don't forget, too, that Ellen DeGeneres was responsible for Hurricane Katrina.)

Ultimately, this video illustrates the challenges too often faced by LGBT youth (and adults) as they attempt to be open about their sexual orientation. As this video shows, coming out can feel like walking on emotional eggshells: For every coming out met with acceptance and love, there is one met with violence and hate. Just ask Daniel Pierce, a young man who made national headlines after he came out to his family. They staged a "pray away the gay" intervention that became emotionally and physically violent when he refused to participate, and he ended up homeless. Pierce's story is not the only one. According to a 2012 study by UCLA's Williams Institute, close to 40% of homeless youths identify as LGBT.

Although America has made tremendous gains in terms of legal equality — gay marriage bans seem to be falling by the day — the struggle to change cultural perceptions of LGBT individuals continues.