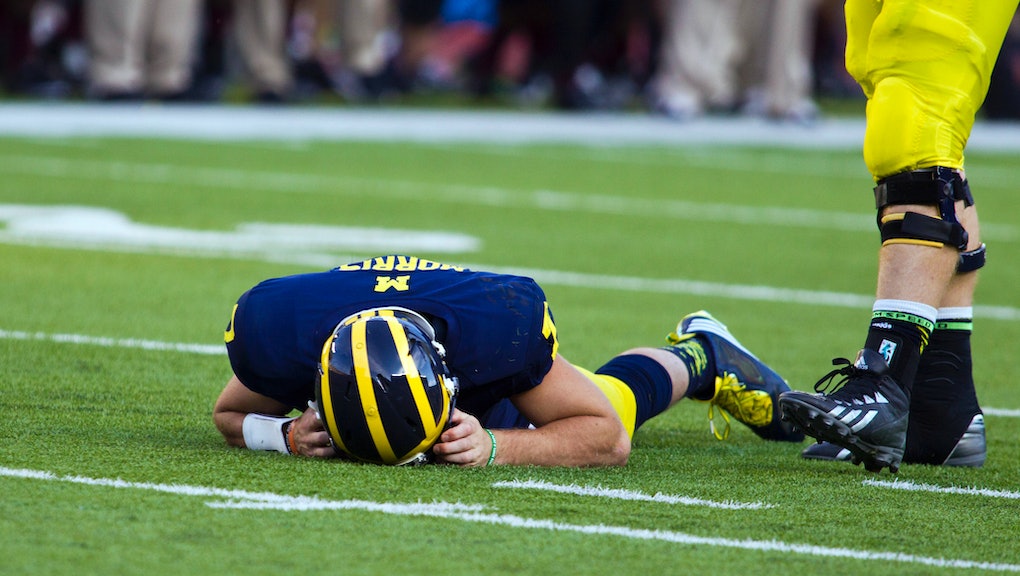 We knew concussions in football were all too common, but we didn't know they were this common.

A new study from researchers at Harvard and Boston universities shows that more than 80% of concussions in football go unreported. That means often players continue playing in a state that puts them in even more danger.

It's sobering news for a sport that, despite recent steps to cut down on the injuries, still seems to leave young players all too susceptible to harmful and potentially long-lasting brain damage.

The data: The researchers asked 734 college football players about their experiences during the 2012 season. The topic? How often they were diagnosed with concussions, how often they suspected they suffered concussions but weren't diagnosed and how often they received "dings," or nonspecific injuries that often aren't treated seriously.

For every concussion that the players knew about, they had four more that didn't get diagnosed, as well as 19 dings. One big problem, according to the study, is that accurate concussion diagnoses (and accurate analysis of how bad a ding is) require honest information from a player. While 67% of players reported that they intend to report concussion systems, nearly one-quarter said that they do not.

It's not just a matter of whether a player is hiding information for fear of being taken out of a game, though. There's a good chance they might not even know what symptoms to report. "It is possible that athletes experiencing more frequent impacts begin to consider them a routine or normative aspect of their positional role and feel less compelled to report symptoms that may result," the study says.

Why it matters: While most concussions are mild and allow for a full recovery, each one can have a lasting effect on the brain. Abnormal brain activity can last for years after concussions, and studies have found that such injuries can lead to memory loss, attention deficits and depression, even decades later.

One major outcome at the heart of the NFL's recent concussion settlement is chronic traumatic encephalopathy, or CTE. CTE is caused by a buildup of a degenerative protein in the brain following repeated brain trauma and can lead to increased aggression, lack of impulse control and eventual dementia. Scientists think CTE may play a role in incidents like former linebacker Junior Seau's suicide and linebacker Jovan Belcher's murder-suicide.

There are plenty of problems with the approach, notably that it's nearly impossible to tackle this way every time and that many head injuries are sustained during other parts of play, like blocking by lineman. It also puts a lot of faith in youth football coaches, who can obtain a Heads Up certificate pretty easily.

The first big need highlighted by the study is to make sure that players, especially younger ones, can honestly report their status to coaches and medical officials, who will respect the danger and keep them out of play. This means further education about concussion symptoms and an effort to destigmatize head injuries so players and coaches don't fetishize playing through pain.

On a larger scale, it likely means more changes to America's favorite sport. It's starting slowly with tackling techniques, but as more research like this comes out, expect to see a pretty different-looking sport in the future.