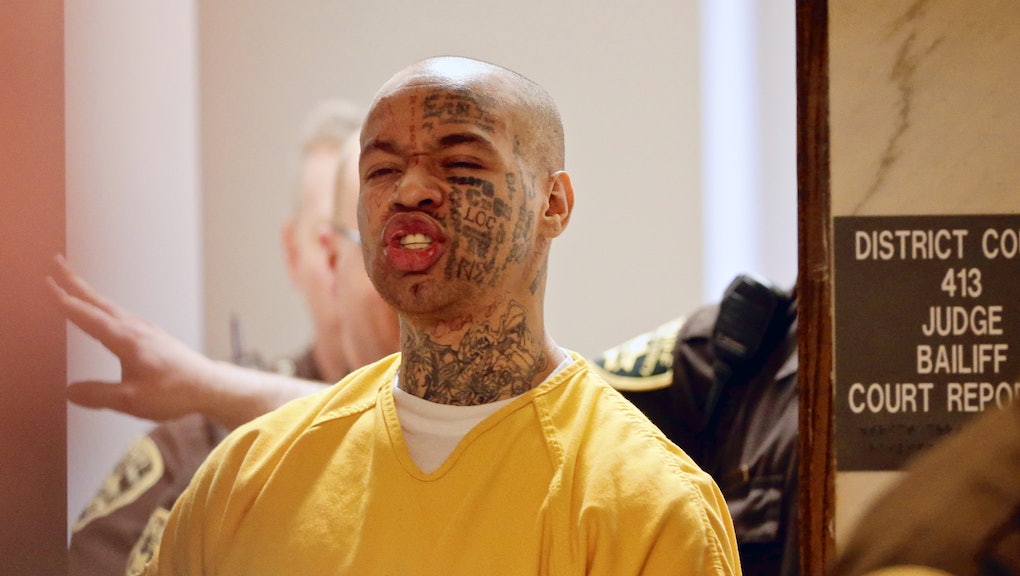 A Nebraska Republican Is Using a Tattooed, Screaming Black Man to Scare Voters

The news: Election season is heating up in Omaha, and Rep. Lee Terry (R-Neb.) is drawing support the best way he knows how: using a tattooed, screaming black man to scare people into voting for him.

The man in the video is Nikko Jenkins, whose combination of blackness and violent mental illness makes him the ideal bogeyman for a city that's 67.3% white.

Background: Salon reports that Rep. Terry, the man behind the ad, is a Republican incumbent defending his seat in the U.S. House of Representatives.

His Democratic opponent, Brad Ashford, is a state legislator whom Terry accuses of failing to properly restrict Nebraska's "Good Time" law, a controversial measure that cuts one day off an inmate's jail sentence for every day he or she spends locked up.

The ad focuses on Jenkins, a diagnosed schizophrenic and possible antisocial personality disorder case, who was released from prison in July 2013.

Jenkins was serving an 18-to-21-year sentence for armed robbery and assault, but he got out after 10 years and promptly murdered four people, becoming a convenient poster child for the law's alleged failures.

"Good Time" was originally enacted to combat prison overcrowding and has been criticized ever since.

The law's effectiveness is beside the point: Parading the specter of black criminality is a familiar tactic used to galvanize white voters since time immemorial, and it conveniently obscures some key systemic failures.

In this case, these failures are tied to America's tendency to punish mental illness as a crime instead of treating it as a health issue. According to Omaha.com, Jenkins' struggles with the law began when he was 7 years old and brought a .25-caliber handgun to his elementary school.

They persisted for the next two decades, which saw Jenkins moved in and out of foster homes and jail, repeatedly threatening and assaulting those around him and otherwise proving himself a threat to their and his own safety.

But instead of receiving long-term treatment, he was thrown in prison. And whatever rehabilitative lessons he learned there clearly didn't stick — the crimes he committed after his release will attest to that.

However: That didn't stop Rep. Terry, who took the Jenkins case as an opportunity to both perpetuate the myth of prison efficacy and propagate the stereotype of the violent black bogeyman.

The supreme irony of the situation is that Omaha is way more dangerous for black people than for the white majority Terry's ad is targeting: The Washington, D.C.-based Violence Policy Center named it the most dangerous city in America for black people, Mic's Tom McKay reported in January.

But why mention that — or any other salient policy issue — when race-based fear-mongering will get the job done much more effectively? Congratulations, Rep. Terry: You're exactly what's wrong with American politics today.