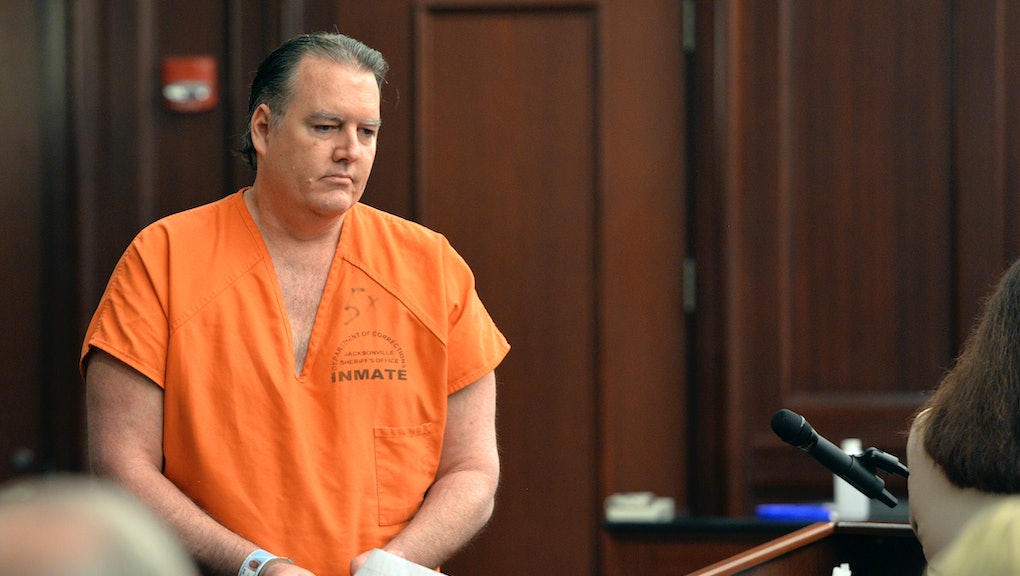 The news: Michael Dunn, a 47-year-old Florida man recently convicted of shooting and killing 17-year-old black teenager Jordan Davis at a Jackonville gas station following an angry argument over loud music, has been sentenced to life without parole for murder.

CNN reports that Duval County Judge Russell Healey handed down the sentence on Friday, and had a sharp rebuke for Dunn: "Mr. Dunn, your life is effectively over. What is sad... is that this case exemplifies that our society seems to have lost its way."

Dunn was convicted on three charges of second-degree attempted murder, one for each of the three other occupants of Davis' vehicle. Witnesses testified that Dunn fired at least 10 rounds at the passengers in the car, continuing to fire even after the occupants attempted to retreat. Florida juries were skeptical of Dunn's explanation that he "feared for his life" after the four occupants brandished a shotgun at him. The weapon Dunn claimed spurred his act of self-defense was never found in the car — nor was any object resembling one — and he failed to report the incident to police.

The background: Dunn's case drew national attention because it seemed to reflect many elements of the infamous shooting death of black teenager Trayvon Martin by George Zimmerman in Sanford, Fla. Both trials were viewed by the national media and activists as inextricably tied with Florida's infamous Stand Your Ground law, which allows defendants to avoid a trial by claiming self-defense.

Critics point to statistics demonstrating whites are disproportionately cleared for killing blacks to argue the laws are fundamentally racist; a Tampa Bay Times investigation found that "seventy-three percent of those who killed a black person faced no penalty compared to 59 percent of those who killed a white." Though neither Dunn nor Zimmerman sought the pre-trial clearance available under the law, the two trials fit into what the Christian Science Monitor's Patrik Jonsson described as a "long narrative of juries refusing to convict white vigilantes on serious charges."

However, Healey took the opportunity to say that the incident should not be interpreted as reflecting on the Stand Your Ground law and that Dunn would have been convicted even if he had claimed it during his defense. "You hear people debate over the right to stand your ground," he said. "And while that debate will continue I'm sure, we should remember: There's nothing wrong with retreating or deescalating the situation."

Why you should care: Race relations across America — particularly on the subject of gun violence — remain tense, but hopefully Dunn's conviction for murder can ease them.

"We may have in this state 'stand your ground' laws but that doesn't allow you as a citizen, when you have a chance to diffuse a situation, for you to be so aggressive," Davis' father Ron Davis told CNN. "It's basically saying to people, stop with the shoot first."

Noting the nearly all-white jury, he added that "hopefully this is a start that we don't have to look at the make up of the jury anymore."