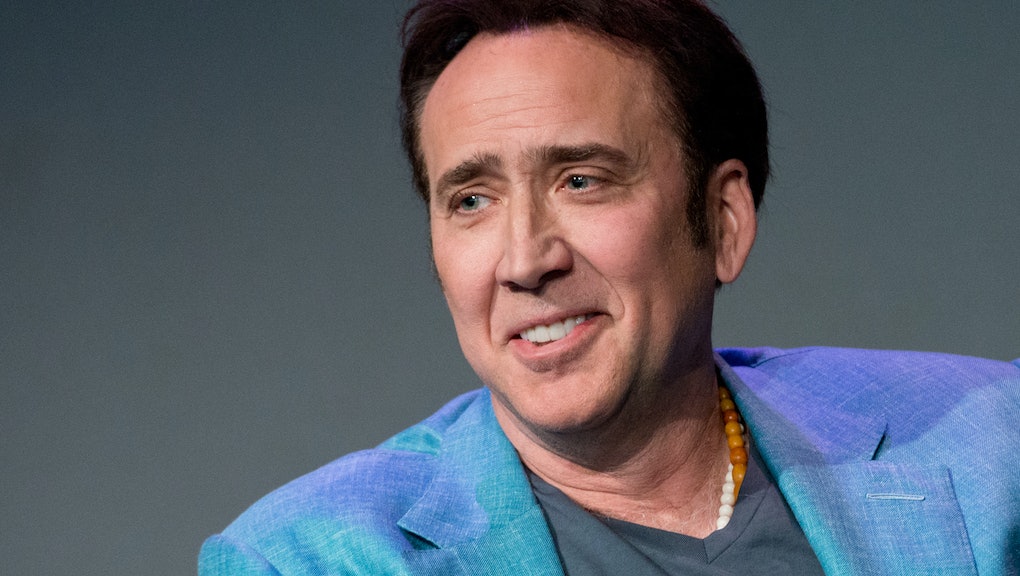 Nicolas Cage Does Not Want You to See His New Movie

Nicolas Cage is known for not being particularly choosy with his roles. He's been in everything from schlock like Ghost Rider to Oscar-winning works of pure beauty like Con Air. So what's got him so embarrassed about his latest flick?

In Dying of the Light, Cage plays Evan Lake, a CIA agent who hunts a terrorist while suffering from dementia. But director Paul Schrader says the film being released isn't the one he wanted to make, thanks to the studio allegedly wresting creative control of the movie away.

Cage, Schrader and others who worked on the film engaged in a sort of silent social media protest.

We lost the battle. "Dying of the Light," a film I wrote and directed, was taken away from me, redited, scored and mixed without my imput. Yesterday Grindstone (a division of Lionsgate) released the poster and the trailer. They are available on line. Here we are, Nick Cage, Anton Yelchin, Nic Refn and myself, wearing our "non-disparagement" T shirts. The non-disparagement clause in an artist's contract gives the owners of the film the right to sue the artist should the owner deem anything the artist has said about the film to be "derogatory." I have no comment on the film or others connected with the picture.

That's the photo and message Schrader posted on his Facebook page. By his reasoning, Cage and the others aren't technically disparaging the movie, so there are no grounds for a lawsuit from the studio.

Williams and fellow producer Gary Hirsch say Schrader quit the movie after they sent back changes. Schrader says that wasn't the case. "I was never asked back," he told Variety.

The result: Schrader's original version of the film had already garnered some praise. "It's a movie by a real filmmaker," New York Film Festival director Kent Jones told Variety. "What I saw a pretty compelling character study and a movie that I was looking forward to seeing in its finished state."

Jones also praised Cage's performance, calling it "amazing" and "very powerful." We'll see how much of the movie survived the studio gauntlet when Dying of the Light is released in December.

If you need your Cage fix before then, he's starring in Left Behind, which is out now. Critics say it's just terrible.