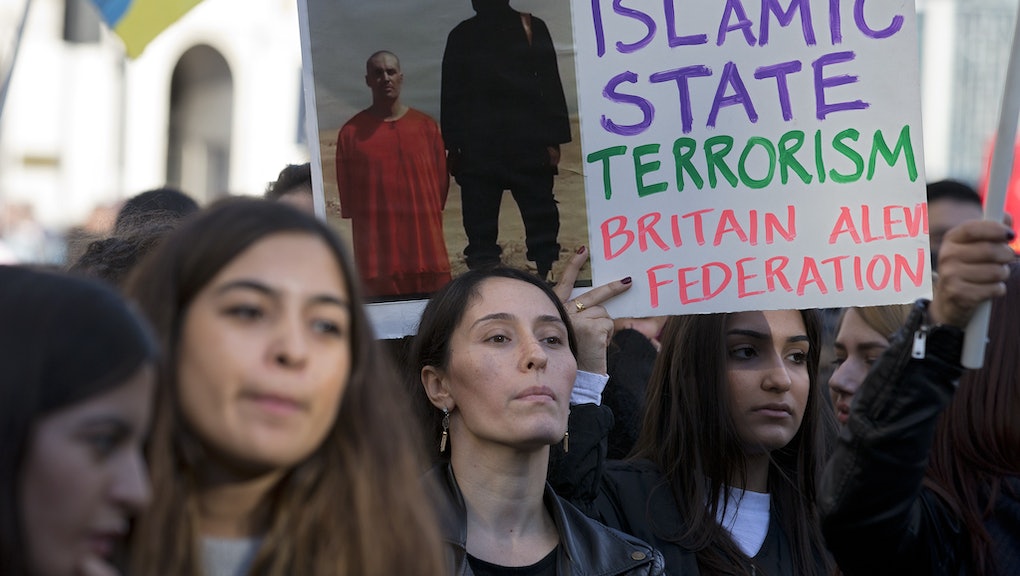 The news: The Treason Act of 1351 is making a comeback.

"We have seen people declaring that they have sworn personal allegiance to the so-called Islamic State," Hammond told Parliament, adding he would advocate the statute's use to the interior minister. Joining the Islamic State "raise questions about their loyalty and allegiance to this country and about whether the offense of treason could have been committed," Hammond said.

"Jihadi John" is among 500 Britons of largely Muslim backgrounds that security officials say are likely fighting under the black flag of the Islamic State in Iraq and Syria. Officials are concerned that they will return to Britain to carry out an attack. The country is seen as a major target because of its participation in the U.S.-led invasion of Iraq in 2003, a threat realized in suicide bombings that killed 52 people in London in 2005.

British police have made 218 arrests so far this year as part of counter-terrorism investigations, according to Mark Rowley, Britain's spokesman for counter-terrorism, who also noted that social media is playing a crucial part in the recruitment of IS fighters.

"These plots are of varied sophistication, from individuals planning to carry out spontaneous yet deadly attacks to more complex conspiracies, almost all seemingly are either directed by or inspired by terrorism overseas," Rowley said. "The growing problem of young, impressionable, and in some cases vulnerable, individuals being radicalized online is an increasing risk."

The law: Passed 663 years ago during the reign of English King Edward III, the Treason Act of 1351 was one of the first statutes to codify and curtail the common law offense of treason. The law, distinguished between high treason (treason) was against the crown and petty treason (disloyalty to a subject). Guilt arises when: "A man doth compass or imagine the death of our lord the King, or of our lady his Queen or of their eldest son and heir."

"'Violating' your majesty's wife, the sovereign's eldest daughter, or the wife of the heir to the throne were also treasonous acts," the Guardian explains. "If you waged war against the king, aided the enemy or even killed the king's chancellor, your crime was punishable by death."

The maximum sentence was death until 1998, when it was reduced to life imprisonment.

One of the most famous enforcements of the Treason Act in English history was in the case of Guy Fawkes, the Catholic Yorkshireman was arrested in 1605 while hiding in a cellar and surrounded with 36 barrels of explosives beneath the House of Lords, a plot meant to assassinate King James I.

The last time the Treason Act was used was in 1945 to prosecute and hang the Nazi propagandist William Joyce. According to the prosecutor, Joyce was proved to have been employed by the German radio company and to have delivered from enemy territory broadcast talks in English hostile to Great Britain.

But why use such an old law? In September, David Cameron outlined new anti-terror measures to MPs designed prevent British citizens from "declaring their allegiance" to the Islamic State by seizing terrorist suspects' passports and stop British-born extremists from returning to the U.K. Invoking the Treason Act is the highest rebuke the British government can deliver to a citizen who's defected to foreign terrorist organizations.