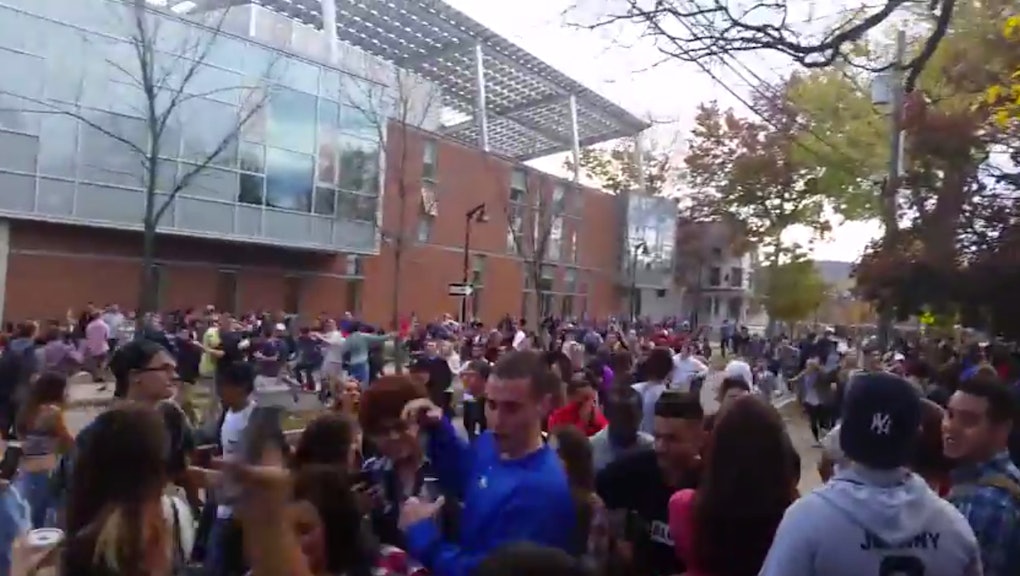 On Saturday night, police armed with tear gas and pepper spray were called in to contain riots that broke out during a pumpkin festival in Keene, N.H.

CNN reported that those involved — many of whom were students at nearby Keene State College — yelled expletives at police, started fires, flipped cars and tore down street signs. Video footage showed bonfires burning well into Sunday morning, as well as streets littered with broken bottles and debris. Dozens of arrests were made, and multiple ambulances reported to the area to help the injured.

"It's just like a rush. You're revolting from the cops," 18-year-old Steven French told the Keene Sentinel. "It's a blast to do things that you're not supposed to do."

"Because of arrests (140 last year, the Sentinel reported) and injuries at past festivals, the community has held forums in recent years — inviting police and emergency room doctors as well as residents — to explore ways to mitigate the violence, vandalism and littering that come with the celebration," CNN reported.

Wait a minute: Not too long ago, the mass protests in Ferguson, Mo., captured the world's attention. Those riots, however, were treated considerably differently than the bedlam that occurred in New Hampshire — something Des Moines Twitter user Matt Weinecke summed up perfectly:

Other Twitter users pointed out this disparity as well:

They deftly point out a sad truth: The media discusses acts of violence and vandalism by primarily white college students in a starkly different manner than black youths.

Some will brush off what happened in Keene as kids being kids or as representative of a small minority of the white population — fringe behavior. But the black community doesn't have that luxury. When violence happens in the black community, it's seen as symbolic and part of a larger pattern; a disruptive few somehow represent the black community. Black people are lumped into one homogenous category, one that leaves no room for the nuance and complexity of how communities grow and thrive. In the case of New Hampshire, the media wrote off the incident as annual autumnal bacchanalia.

During a rash of rioting by surfers in Huntington Beach, Calif., Cord Jefferson satirically asked, "How long must we wait for the white community to get its act together?" A day after the protests in Keene, nowhere do we see political or media commentary that asks people in the white community to speak out, tells white parents to get their acts together or complains about the "thuggish" values of today's youth.

All this over a New Hampshire pumpkin festival, possibly the whitest festival imaginable. If there was ever a study in contrasts, it's right here.