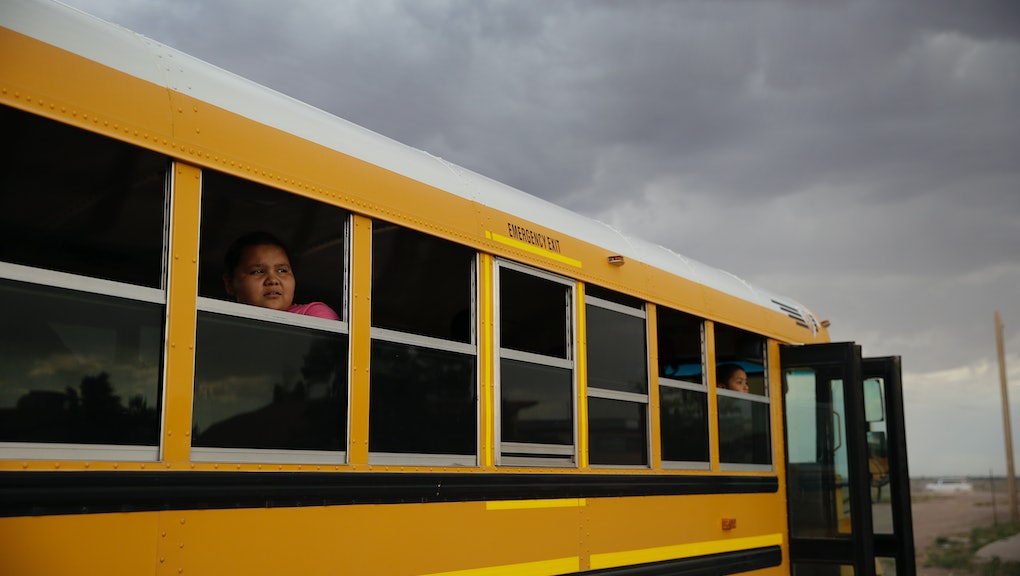 This Is What Modern Day Discrimination Against Native Americans Looks Like

The news: Despite the furor over the Washington Redskins and Columbus Day, the most serious discrimination against Native Americans doesn't take place at a football game or during a poorly-named day off from work. It starts in schools, and pervades all aspects of a Native American's life as time goes on.

In addition to 81 students, Little Singer Community School is also home to asbestos, mold and scores of mice. Students have to carry their seats from class to class, presumably because the school can't afford chairs for each classroom.

"We have little to work with, but we make do with what we have," Verna Yazzie, a school board member, told the Associated Press. Yazzie's school, Little Singer Community School, is located in the Navajo Nation.

The school, AP notes, is "marked by remoteness, extreme poverty and few construction dollars." The government added it to a priority replacement list a decade ago, but cut the school's budget in 2013. Under such conditions, it's no wonder the quality of education suffers. In 2013, fewer than 25% of Little Singer Community School's students were proficient in reading and math.

This isn't an isolated incident. The federal government is responsible for 183 native American schools across 23 states. Little Singer wasn't the only one to perform poorly. As the Atlantic reported, Native American students received much lower marks than their white peers in reading and math on the National Assessment of Educational Progress. Underfunded schooling leads to a decreasing high school graduation rate. Their dropout rate is two times the national average.

This is a systemic problem that has lifelong implications for Native Americans and is just another chapter in a sordid history of discrimination and prejudice — and no, the Navajo Nation winning a lawsuit against the U.S. Government for $554 won't magically solve the problems overnight (though it is encouraging).

Barack Obama recently vowed to reform Native American education and to give more control over schools to the individual tribes, but even if his words are true, it won't be enough to repair the damage that's already been done.

It's not a stretch to think the lackluster education leads the following statistics from the New York Times:

The country's 310 Indian reservations have violent crime rates that are more than two and a half times higher than the national average, according to data compiled by the Justice Department. American Indian women are 10 times as likely to be murdered than other Americans. They are raped or sexually assaulted at a rate four times the national average, with more than one in three having either been raped or experienced an attempted rape.

Maybe it's also the reason why 1 in 4 Native Americans live in poverty and why they continually face double-digit unemployment rates. They also lack access to healthcare and have a lower life expectancy than average.

The takeaway: Discrimination against Native Americans is far more ingrained in the American way of life than just the presence of the Washington Redskins, the thousands of other American teams with racist caricature mascots,and people appropriating/insulting Native American culture from time to time. Native Americans face serious and perhaps insurmountable economic, social, and political hardships in the United States, many of which start as early in their lives as their basic elementary school education. Americans need to be aware of that.