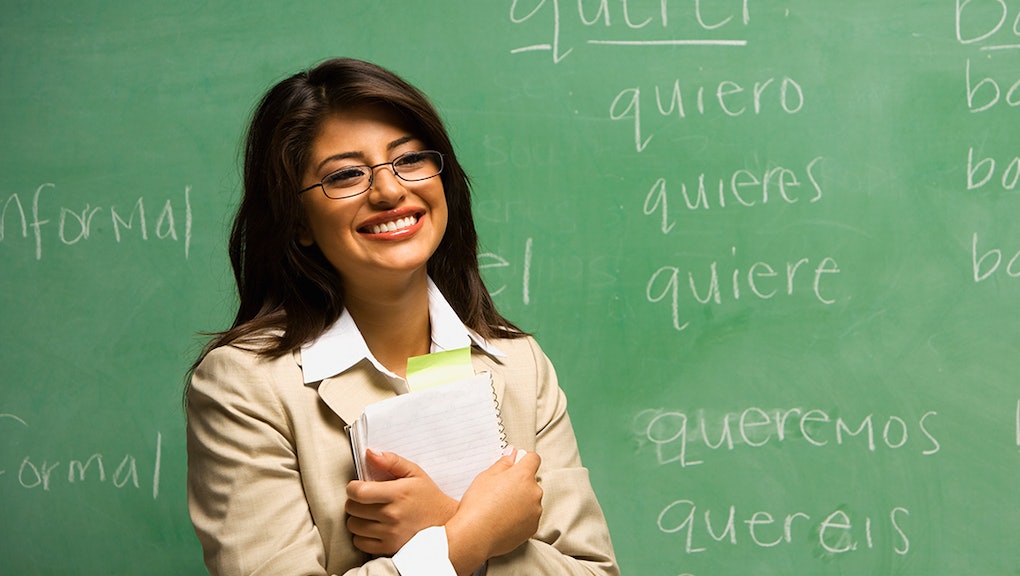 Science Reveals Something Surprising About People Who Speak Multiple Languages

Is bilingualism good for your brain?

The news: Yes — and overwhelming so. A new study published in Bilingualism: Language and Cognition has concluded that young bilingual students are better able to focus on "demanding mental tasks despite distractions." The study offers further proof that learning two languages has long-lasting benefits on one's mental fitness.

The study: A team led by Anglia Ruskin University's Roberto Filippi conducted a small but in-depth survey of 40 participants, 20 of whom were bilingual and 20 of whom spoke just English. The bilingual group was diverse; the BBC reports participants spoke "Italian, Spanish, Dutch, Armenian, Bengali, Polish, Russian and Portuguese" with a mean age of 8.8 years. All had highly educated parents.

Filippi and his team presented the children with images of two animals interacting on a computer screen, asking them to answer simple but grammatically complex questions about the images. They then mixed voices talking over the questions into the audio track, one in English and one in Greek.

The results? Bilingual children obtained the correct answer while the distracting Greek voice was talking 63% of the time, up from 51% in the monolingual group. The bilingual group was significantly better at filtering out background noise and focusing on the task at hand. What's more: The older the bilingual children were, the more quickly they outpaced the monolingual control group. Filippi told the Telegraph why these findings are so important:

"Previous research has shown that bilingualism has a positive effect on cognitive abilities, but there were no studies investigating whether these advantages extended to learning in noisy environments.

Why it matters: The results align with another recent study that found bilingual people are able to execute novel instructions about one-half a second faster than those who speak just one language. This shows that the approximately 20% of Americans who are bilingual may have better executive functioning (the outcome of cognitive processes involved in reasoning and problem-solving, among others) than their monolingual counterparts.

Filippi told the Telegraph that his research demonstrates the "acquisition of two languages in early childhood provides a beneficial effect on cognitive development." That's another strike for team bilingual, and yet more evidence the U.S. should be doing more to train students in other languages.