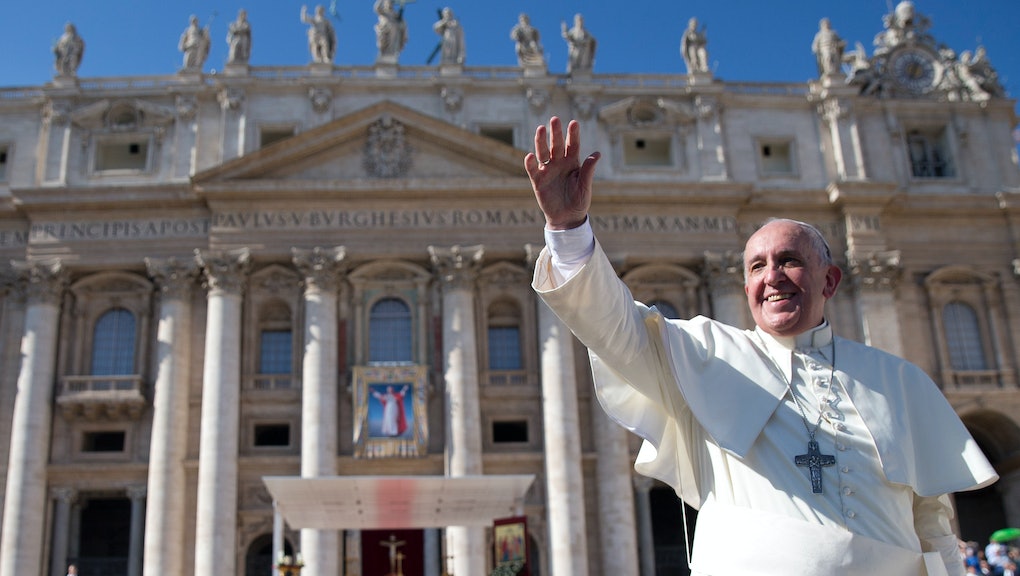 The news: Pope Francis has doubled down on his progressive stance toward including gays in the Roman Catholic Church after conservative bishops stymied his efforts.

"God is not afraid of new things. That is why he is continuously surprising us, opening our hearts and guiding us in unexpected ways," he said in front of 70,000 people at St. Peter's Square, Reuters reported. He added that the Roman Catholic Church should be more open to the divorced and the unmarried as well.

The context: Francis shared his remarks after the bishops rejected a report from last week containing language they deemed too favorable to gays. In order to get a green light, a Synod document needs to be approved by a two-thirds majority.

The original report made note of the "gifts and qualities" gays possessed, as well as the "precious support" present between partners of the same sex.

The more conservative bishops couldn't even tolerate an amended report with much glibber language. This report said gay unions could "not even remotely" be compared to heterosexual marriages. Though it did begrudgingly say "men and women of homosexual tendencies must be welcomed with respect and sensitivity."

What does this mean going forward? For starters, it doesn't mean Pope Francis' plan to liberalize the Roman Catholic Church has ended in failure.

The Guardian reported it was only a group of roughly 30 bishops who held up approving the report. Meanwhile, a far greater number were in favor of supporting gays. So while it's unfortunate there are still bishops who "refused to agree to treat gay people with respect and tenderness because the wording implied the existence of a gay 'identity' which they cannot for cultural reasons accept," it's ultimately good news (for the church, at least) that Pope Francis isn't deterred by bigotry.

Though it's unfortunate that acknowledging the rights of gays to worship however they please was apparently too much for the two to three dozen bishops who nixed the document (and let's not even get into the church's backward view on transgendered people).

Still, Pope Francis is far more progressive than his predecessors. Give it a few years, and the church might finally start bringing itself into modern times in regards to LGBT rights.