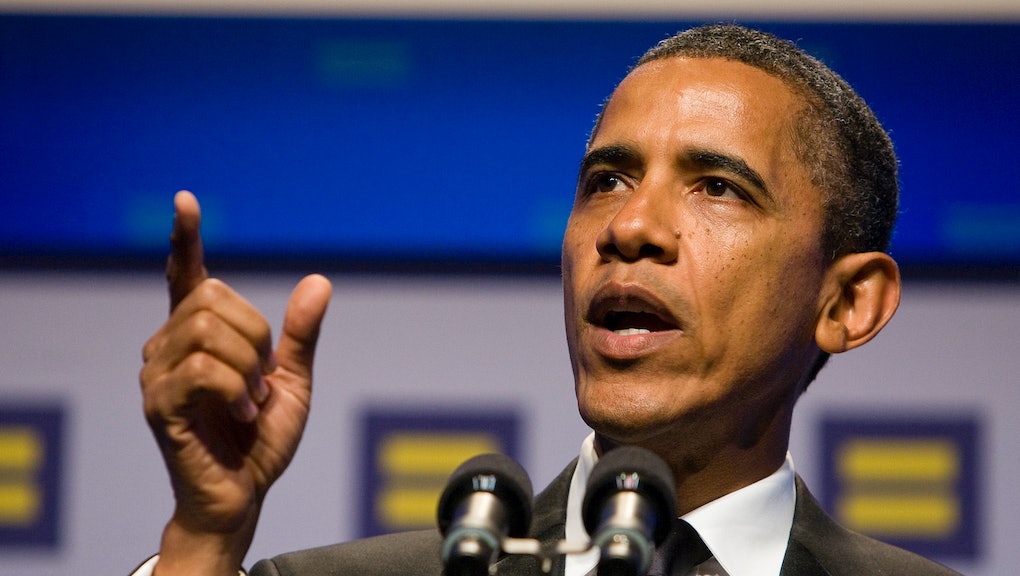 The news: President Obama has a bit of a history of "evolving" his positions on controversial topics like gay marriage, but it seems he may have just reached his final form.

In an interview with the New Yorker's Jeffrey Toobin, President Obama now believes that same-sex couples in every state should be allowed to marry under the equal protection clause of the Constitution — a significant switch from his earlier stance in May 2012, when he believed the issue was best left to the states. Here's the relevant passage from Toobin's lengthy interview on how the president is planning to shape his "judicial legacy":

"Ultimately, I think the Equal Protection Clause does guarantee same-sex marriage in all fifty states," he said. "But, as you know, courts have always been strategic. There have been times where the stars were aligned and the Court, like a thunderbolt, issues a ruling like Brown v. Board of Education, but that's pretty rare. And, given the direction of society, for the Court to have allowed the process to play out the way it has may make the shift less controversial and more lasting."

The background: This is the second time Obama has shifted on gay marriage. As Bloomberg View noted in February, before holding a "state's rights" view of gay marriage, the president has long had "cold feet" on subject.

In 2004, then-Senate candidate Obama said that he did not believe marriage was a civil right, specifying that he believed marriage was between a man and a woman who were "performing something before God." In 2010, he repealed "don't ask, don't tell" (the policy prohibiting gays from serving openly in the military) and endorsed civil unions, remaining opposed to gay marriage.

In 2011, senior White House adviser Dan Pfeiffer denied that the president had ever supported gay marriage in the first place. Later that year, Obama told ABC's George Stephanopoulos that he was "working on it."

In May 2012, Vice President Joe Biden accidentally came out in favor of gay marriage well before the president was willing to on Meet the Press, triggering furious reactions from Obama and the White House.

That evolution now seems to be over. While it's long been an open secret that the president holds liberal views on the issue but feared that acknowledging them might alienate constituents, he is firmly out of the gay-rights closet. And all it took was two major Supreme Court decisions, 31 states legalizing it and skyrocketing public support to wrench him out of it.

Why you should care: To some extent, Obama's support for gay marriage doesn't matter: The country has already evolved right past him and other prominent Democrats like Hillary Clinton. A GOP-controlled House (and possibly soon the Senate) means that any federal legislation on the topic is off the table for the next two years, while it's very unlikely the Roberts court will see any justices replaced before the end of Obama's second term.

But Obama openly backing the right of gay couples to marry — and laying out a constitutional justification for it — is still a major milestone for the gay rights movement. It will now be significantly harder for any potential successor to backtrack on gay marriage, and the support of the nation's leader will make Republican opposition to same-sex marriage look increasingly bigoted.

Coupled with his historic executive order protecting all federal contractors against LGBT discrimination, the president may still squeak out of this one with a progressive legacy. Had the nation not gotten over its homophobia so fast, we might still be waiting for the first openly pro-gay president.