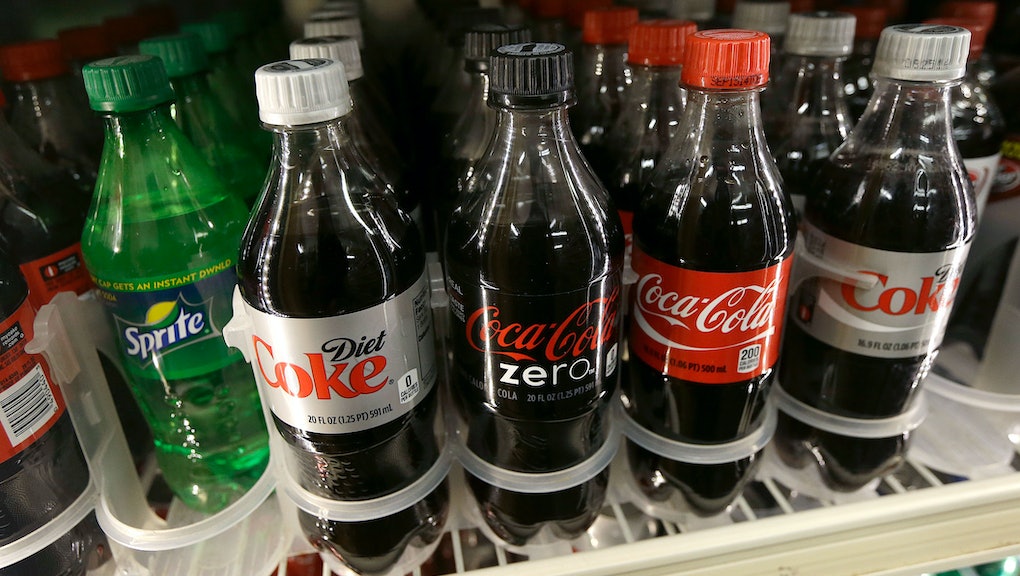 If You Would Never Smoke a Cigarette but Still Drink Soda, Read This

The news: Drinking soda makes you age faster, according to science.

Research indicates daily consumption of a 20-ounce soda (though the study didn't say over how long a time period) correlated to nearly five years of increased aging. This is comparable to the effects smoking cigarettes have on aging.

"We think we can get away with drinking lots of soda as long as we are not gaining weight," Elissa Epel, a doctor who worked on the study, told CBS. "But this suggests that there is an invisible pathway that leads to accelerated aging."

The science: Researchers from the University of California, San Francisco, took five years studying a sample of 5,300 adults to reach this conclusion.

Humans have things called telomeres. They're on the end of your chromosomes and they shrink as you get older. As telomeres shrink, it gets more difficult for cells to regenerate, hence the aging process.

However, as the researchers noted, "association does not demonstrate causation" as they "only compared telomere length and sugar-sweetened soda consumption for each participant at a single time point."

Still, the findings are sobering for anyone who enjoys their Coca-Cola, Pepsi or even RC Cola.

Should you stop drinking soda? Probably. For one thing, you need to run for almost an hour to cancel out the calories from just one bottle. While Coca-Cola and Pepsi are trying to decrease caloric content in their drinks, this doesn't address the numerous other health concerns present.

In fact, you might want to give up more than just soda. We live in a time when not even pizza is safe from the perils of toxic chemicals in our food. If you haven't changed your diet yet, maybe you should.

It's not too late for change: If you want to wrest a few precious years of life back from the soda demon, you can — telomeres can be lengthened with proper exercise.

And the rest of society is starting to come around to the fact that soda isn't exactly fit for mass consumption. New York City Mayor Bill de Blasio is searching for ways to fight soda's stranglehold on his city. Meanwhile, CVS nearly banned soft drinks, along with cigarettes.

The sugary tide is turning against soda. Science says you should turn with it.