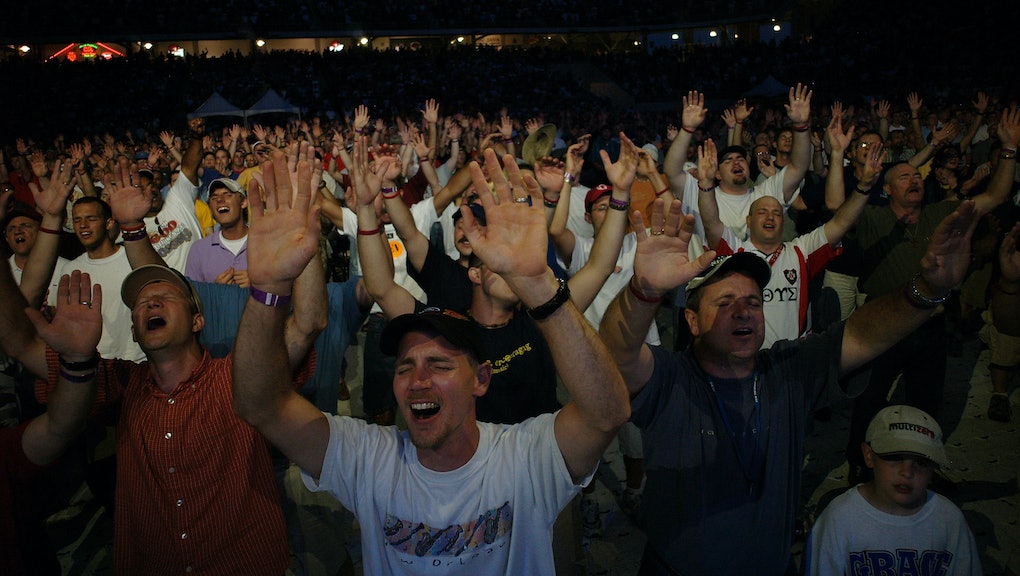 The GOP's Most Reliable Voters Are Becoming an Endangered Species

One group of voters that Republicans have always relied on is disappearing, and it has major consequences for how the party will look in the future.

White evangelical Protestants have been a dependable base for Republican candidates for decades. In both the 2008 and 2012 presidential elections, as Robert P. Jones points out in The Atlantic, "roughly three-quarters of white born-again Christians supported GOP nominees John McCain (73%) and Mitt Romney (78%)."

But the effect of their support is diminishing: Not because evangelicals have changed allegiances, but because their numbers are plummeting.

The evangelical population has dropped by 4% since 2007, and the Southern Baptist Convention "has reported steady declines in membership and new baptisms," as noted by The Atlantic.

In other words, young evangelicals aren't replacing older evangelicals at a fast enough pace to maintain the group's electoral influence.

The plunge in evangelicals' influence can be attributed to the rise of two populations: nonblack ethnic minorities and religiously unaffiliated Southerners. Religiously unaffiliated voters tend to vote for Democrats, as you can see in the chart below, and they're making up a larger share of the vote in the South:

According to the Pew Research Center, "the nation's racial and ethnic minority groups — especially Hispanics — are growing more rapidly than the non-Hispanic white population." Between 2000 and 2010, the Hispanic population accounted for 56% of all population growth, Esri found in 2012. That growth is expected to increase steadily in the future:

These increases, coupled with the decline of white evangelical Protestants, could spell trouble for the Republican Party, which historically has struggled to appeal to minority demographics. Despite this, the underlying dynamics aren't likely to be of much help to the Democrats this year.

The Atlantic contends that the population shifts could be felt particularly in Arkansas, Kentucky, Louisiana, Georgia and North Carolina. But while the margins in these Senate races "are less than five percentage points," Republicans look poised to win at least 4 of 5.

Although the numbers may not be stark enough to swing things Democrats' favor in the midterms, the decline of evangelicals and the rise of minorities may give Democrats a chance in future races. Republicans better step up their game, or pretty soon they, too, might be endangered.