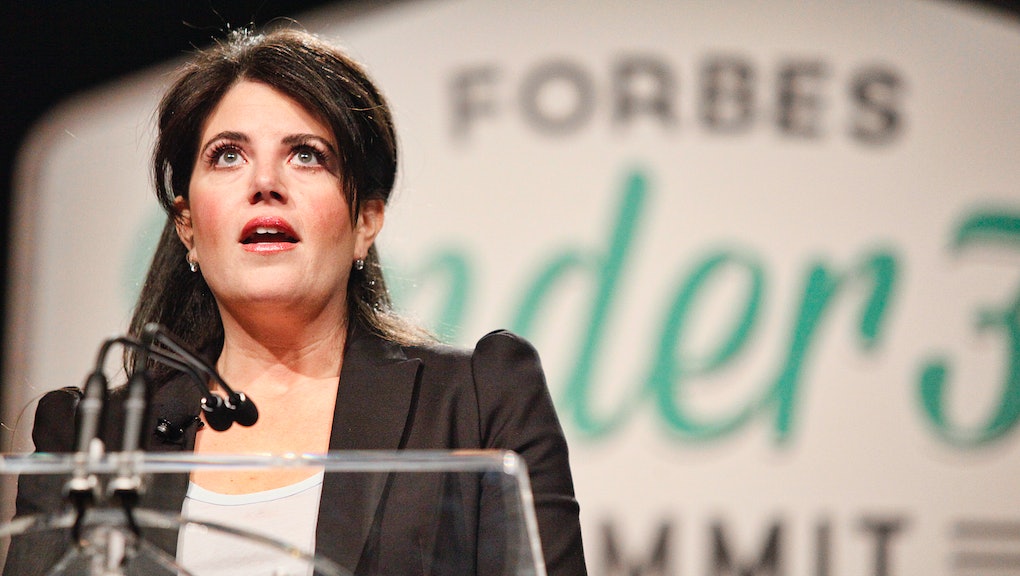 The news: Monica Lewinsky is best known for her role in the massive 1998 scandal that unfurled after her affair with President Bill Clinton, which destroyed her reputation and exposed her to years of sexist abuse. But now she's come back as an advocate for the bullied and the harassed.

In a powerful and emotional speech to Forbes Under 30 Summit in Philadelphia on Monday, Lewinsky talked about being the "first person" whose reputation was destroyed by the Internet and what it feels like to be humiliated online and by the national media. By highlighting her own experiences with harassment on a national scale, Lewinsky let others know they can survive bullying, too.

The speech: "It is only my fourth time delivering a speech in public," she began. "So if I seem nervous, forgive me, because I am. And a little emotional, too."

"I fell in love with my boss, in a 22-year-old sort of way. It happens. But my boss was the president of the United States. That probably happens less often," Lewinsky continued. "Thanks to the Internet, and a website that at the time was scarcely known outside of Washington, D.C., but a website known to most of us today called the Drudge Report, within 24 hours I became a public figure, not just in the U.S. but around the entire globe. ... I was patient zero, the first person to have their reputation completely destroyed by the Internet."

A history of cyberbullying: Lewinsky said that soon, the unending deluge of vitriol directed at her from the Internet grew to the point where she thought to herself, "I want to die." Lewinsky later realized that she was not alone; she cites polling data indicating up to 54% of Facebook users experience cyberbullying and a rapid increase in the number of Internet-related suicides as evidence of its danger to the vulnerable.

Invoking the memory of other victims of cyberbullying like outed gay teen Tyler Clementi of Rutgers University, who killed himself after his roommate publicly streamed video of him kissing another man, she goes on to proclaim that "having survived myself, what I want to do now is help other victims of the shame game survive, too. I want to put my suffering to good use and give purpose to my past."

"There are those who say, 'Monica: why don't you just shut up? Why don't you just go away?'" she continued, addressing her critics. "They never shut up. The problem is that I believe in the power of story ... to inspire, comfort, educate, and change things for the better. ... I believe my story can help to do something to change the culture of humiliation we inhabit and that inhabits us."

Quoting Oscar Wilde, Lewinsky ended with, "To mock at a soul in pain is a dreadful thing."

She left the stage to extraordinary applause.

"It was just so personal," 30 Under 30 Science and Health Care winner Elaine Hsaio told Philly.com. "We kind of came in here thinking, 'Oh, why is Monica Lewinsky coming?' and then came out thinking, 'Oh, that was the most important talk of the morning.' "

Lewinsky announced that she will be partnering with the Tyler Clementi Foundation, a charity set up to promote "safe, inclusive and respectful social environments in homes, schools, campuses, churches and the digital world for vulnerable youth, LGBT youth and their allies."