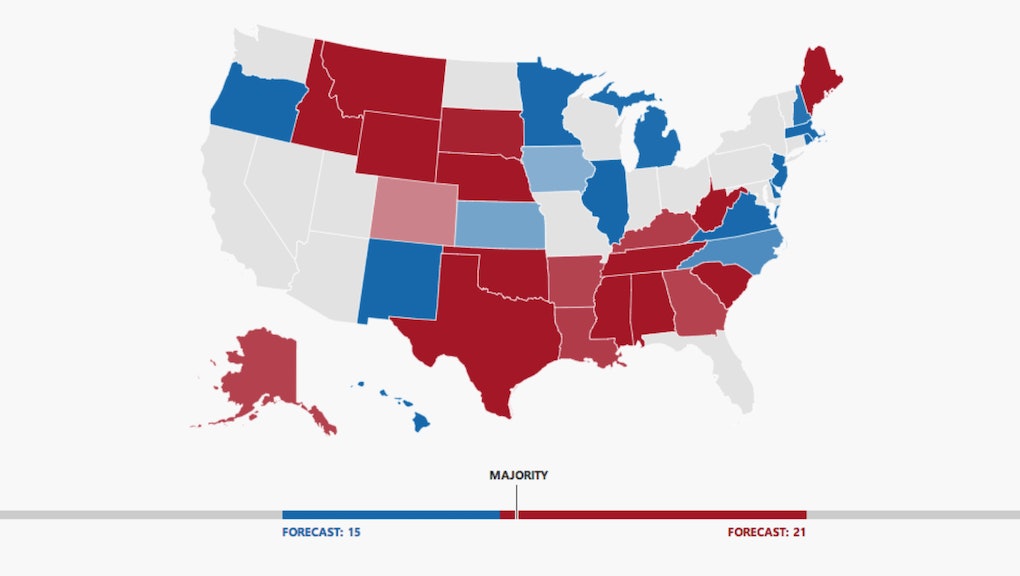 If You Want to Predict the 2014 Midterm Elections, Use This Tool

Mic has unveiled the 2014 Microsoft Bing Predictions widget, your definitive guide to all the latest forecasts in this election season's biggest Senate and gubernatorial races.

The interactive graphic was built by the Microsoft Research team and is powered by a model created by applied economist David Rothschild. It provides up-to-date forecasts and predictions on individual contests and give you a fun, easy way of tracking the Senate's shifting balance of power.

Bing Predictions uses all the best practices of established poll watchers, but adds context — even keeping an eye on social media — to give us the best and most timely picture of these rapidly developing contests.

For instance, the latest snapshot of the Iowa Senate race shows Democratic Rep. Bruce Braley trailing Republican Joni Ernst, who would be the first woman elected to the Senate from the Hawkeye State:

For a bit more on how the widget runs and why it's different from anything else online, we asked Bryan Saftler, a creative strategist at Microsoft, for a look under the hood:

Mic: There are a lot of election models out there, so what makes the Microsoft model stand out in a crowd?

Bryan Saftler (BS): Most prediction models tend to use similar data sets, which is why many models predict similar outcomes. Where our model differs is in how we weigh certain variables, in how quickly we update our model, the number of data sources that go into our algorithm and how we can adjust in real time the importance — or weight — we put behind different data sources as they shift their expected accuracy over time.

Mic: Your model actually taps into social media to help gauge the direction of a race. What are you looking out for and how does that add to a larger understanding of the race?

BS: We use Twitter and other forms of social media to understand interest in a particular topic (be that a candidate, issue or initiative), but we do not factor these heavily into our predictions. What we do is follow the conversation closely to understand what it is people are saying, not only on individual interest level but what the overall conversation is about — using things like keywords and social sentiment.

Mic: How do you take into account big moments in a race — something that will take 5-10 days for most polls to register?

Mic: We like to think that every election is its own story, but how much does history — you call it "fundamental data" tell us about a race right now?

You'll start to the see the Bing Predictions widget in our coverage leading up to Election Day. If you have any questions, please email the politics team or drop us a line on Twitter or Facebook.