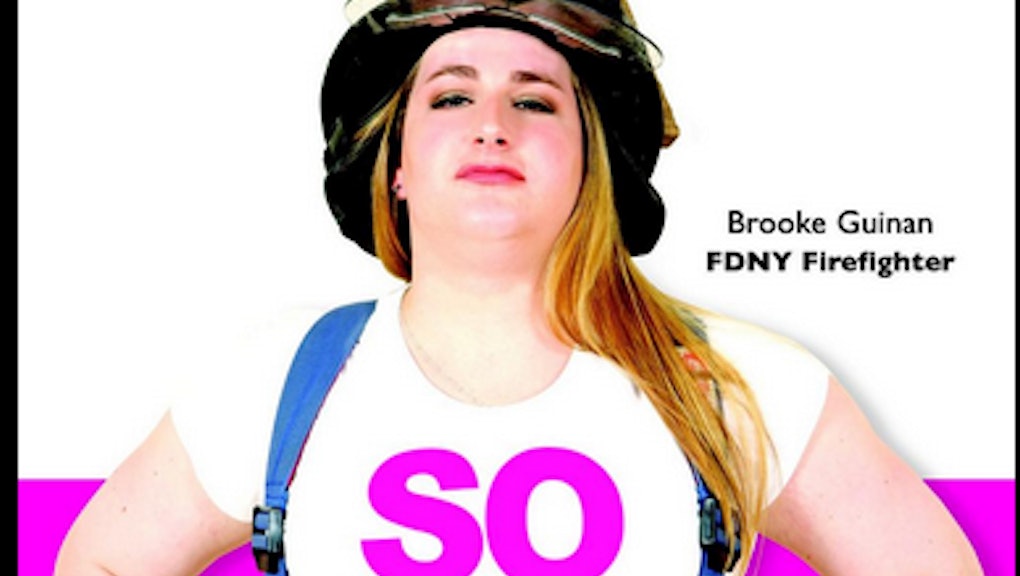 "I always knew that I wanted to help others," Brooke Guinan told Mic, "and firefighting was a very clear-cut way to accomplish that goal in my life once I finally stopped holding myself back and disqualifying myself due to my gender identity."

Stepping out in her firefighter gear for Vocal Organization for International Courage and Equality (V.O.I.C.E.), rocking a loud-and-proud magenta tee reading "So Trans, So What," Guinan has become a viral sensation overnight, yet her pioneering courage has been evident for years.

Guinan told Mic that she immediately was drawn to the campaign: "For me, the boldness of the T-shirt turned that statement from one of trying to be similar and therefore less threatening to normative people and instead said 'SO WHAT! This is who I am and whether or not you agree or understand it, I have the right to live my life authentically and freely with all the protections our society can offer.'"

As the New York Daily News noted, Guinan is currently the only openly transgender firefighter in New York's fire department. She is also only one of 41 female firefighters in a citywide force estimated around 10,000.

Only 27 years old, Guinan transitioned fully while on the job, which, she says, wasn't always easy. "I can't imagine any instance where transition actually is easy, but being in an environment that is vastly male and very group-minded, it is difficult to stand out and embrace your difference." Guinan said part of the unique challenges of being transgender in a job like hers is that the uniform you wear every day becomes an important part of how you see yourself.

"I still have issues with that some days, because I feel like my identity gets lost in the uniform and I become one of the guys to anyone around," she said. "Unfortunately, as I think is the case for most trans people, the largest resistance I felt was my own negative thoughts and attitudes about my 'realness' due to years of internalized transphobia and gender bias that normative culture is too often bogged down by."

Still, while the process may have been difficult on multiple levels, her bosses stood by her. "We're very proud of firefighter Guinan's participation in this important campaign," Fire Commissioner Daniel Nigro told the Daily News this week. The FDNY also tweeted its unwavering support of Guinan:

While transitioning, the FDNY moved her to a desk job at its headquarters in recruitment. Now having returned as an active member of an FDNY company, Guinan — a third-generation New York firefighter — has a new position: role model. And she's taking the responsibilities seriously. "I think out of everything that concerns me most about my role as a voice for trans rights is that I'll let my community down," she noted.

Currently, the majority of transgender Americans face societal and legal barriers on a daily basis. The unemployment rate for the trans community is double the national average. Meanwhile, according to the 2009 National Transgender Discrimination Survey, a whopping 26% of trans individuals have lost their jobs because of their gender identity and 19% of the trans community have experienced homelessness due to the same prejudices.

"Being a firefighter has allowed me the stability of a government job and has given me the opportunity to build my own life," Guinan said. "I'm fortunate in that way and thankful, but a large part of my being outspoken revolves around the fact that I know I'm in the small percentage of trans people who are afforded that luxury."

Advocates like Guinan, who joins an ever-growing list lead by Laverne Cox and Janet Mock, prove that transgender Americans can achieve their dreams — and that includes in careers like firefighter or the police force.

"Putting [fire gear] on often makes me feel empowered as if I were gearing up to go to battle for trans rights. I'm very proud of the shot and what it represents," she said to Mic. "Hopefully it can be a representation of that defiance and strength in the face of adversity for others."

Talk about one of New York's bravest.