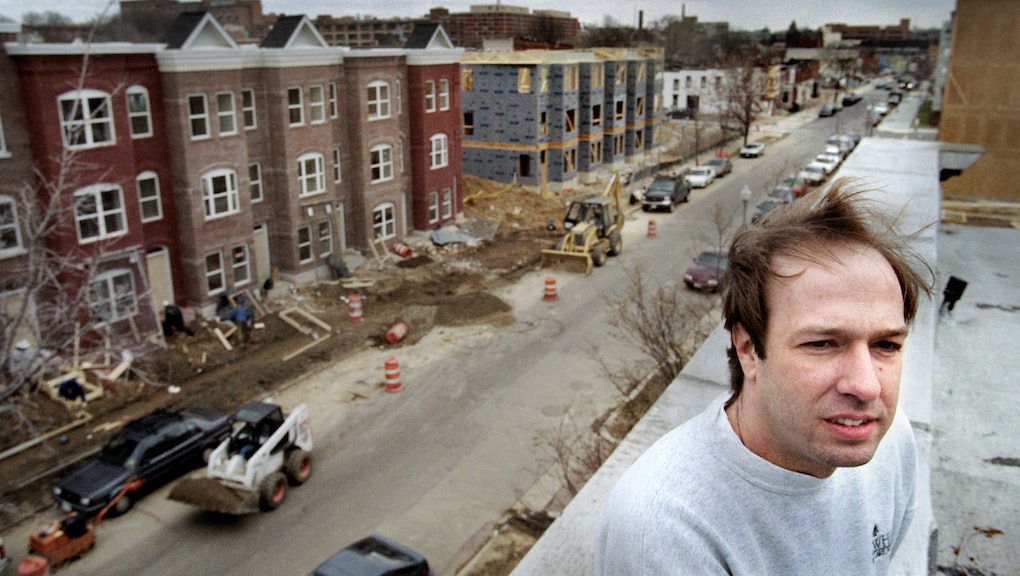 These 7 Cities Expose Exactly What Gentrification Is Doing to America

Twenty-five years ago, the term "gentrification" was largely unfamiliar to the average American. Today, you can't talk about cities, race, rent or overpriced coffee without bringing it up. It's a hard phenomenon to measure, yet most agree its harbingers include the rapid influx of young, well-to-do white people into once low-income neighborhoods, often in the inner city, usually populated by people of color.

The rest is history. Said people show up, the area is flooded with resources, property value rises and many former residents are forced to move out. We've seen such patterns before, where poor people are literally moved around, in and out of their homes, at the behest of the wealthy. It's typically called "colonialism." And that's not an inaccurate comparison.

This dynamic came to a head last week when a group of Dropbox employees in San Francisco's notoriously gentrifying Mission District tried to kick a group of local kids off a soccer field they had reserved:

The subtext was clear: We're here now, we make the rules.

This outcome was uncharacteristically positive, in the short term. A petition and City Hall rally followed, after which the San Francisco Recreation and Park Department ruled that "adult permits" would no longer be issued for the Mission Playground soccer field, according to Latino Rebels.

Most gentrified neighborhoods aren't so lucky. Change is ruthless and unapologetic. Once an area becomes unaffordable for its low-income residents, it tends to stay that way, and the "storied history," "selective nostalgia" and "carefully sprinkled grit" that define this particular iteration of "urban life," in the words of Al Jazeera columnist Sarah Kendzior, become the lens through which America's cities are increasingly viewed.

Neighborhoods, then, are not just homes, but opportunities for profit and redevelopment. And the renewal fantasy that defines them hides an often racist history of deliberate and concentrated impoverishment, one that's inevitably copied wherever poor residents are forced to move next — usually the isolated suburbs they were barred from occupying in the first place.

It's a pattern as old as America itself — and it's not going away any time soon. To illustrate, here are seven cities that have been radically altered by gentrification in the 21st century, as defined by the percentage of urban homes that went from the bottom half of home price distribution to the top half. Data was compiled by the Federal Reserve Bank of Cleveland, and calculates for the period between 2000 and 2007.

The unexpected gentrification capital of America is a city that's more than 50% white.

As yuppies and tech professionals take over the former Irish-Catholic stronghold of South Boston, or "Southie," the neighborhood's once-notorious reputation as an organized crime hub has given way to a bitter nostalgia (ironically espoused by the gentrifiers themselves) for the edge and toughness personified by the Whitey Bulger era, according to the New Republic.

But make no mistake: Southie's prototypical residents are as irritated by "SoBo" as the people who made SoBo claim to be irritated by SoBo.

"The yuppies have invaded. It's totally overrun by yuppies," resident William O'Brien told the Huffington Post.

Plumber Scott Clark said, simply, "It's not my neighborhood anymore."

A small act of civic defiance occurred in Capitol Hill this February. A pair of masked individuals blocked a Microsoft employee bus on its way to the office, brandishing a sign that read "Gentrification stops here." The move came in response to a pattern that's defined the city for years, according to the Seattle Times: With a home price turnaround rate of 55%, the Pacific Northwestern metropolis was the second most drastically gentrified city in the U.S. between 2000 and 2007.

Neighborhoods from Ballard in the north to Delridge in the south have seen dramatic shifts of late. Law professor and longtime Seattle resident Henry W. McGee Jr. specifically articulates the fate of the Central District, once home to Seattle's small black population, where in 2000 the number of white residents surpassed the number of black residents for the first time in 30 years.

The reasons are multipronged, but the fact that black applicants in Seattle are 2.56 times more likely to be denied a conventional mortgage loan than whites, in addition to being more likely to pay higher rates, isn't helping.

Perhaps no city more thoroughly dominates modern conversations around gentrification than New York. Whether it's Spike Lee bemoaning the sudden influx of resources into neighborhoods like Harlem, Bedford-Stuyvesant and Crown Heights since white people moved in, or new Fort Greene residents complaining about homeless people being mean to their dogs in the local park, gentrification stories ranging from bad to awful abound. Today, New York City is the most expensive metropolitan area in the U.S.

Even aside from the Mission Playground incident, San Francisco consistently makes headlines for tensions fanned by gentrification.

The recent tech industry explosion has drawn unprecedented numbers of IT workers to the Bay Area, with the fallout encapsulated by stories like the recent protests designed to stop Google Buses, private vehicles used to transport Google employees, from using municipal bus stops on their daily routes.

It's hard to quantify how drastically this transportation practice could alter the local status quo, but critics claim it pollutes the environment and makes the road more dangerous for the city's cycling community, according to SFGate. Regardless, San Francisco's housing economy has shifted drastically. In the seven years between 2000 and 2007, houses in the bottom half of home prices switched to the upper bracket at a staggering 42% rate.

Recent conversations around gentrification in D.C. have taken a familiar turn, with some arguing that it has, in fact, been a good thing for the region's original residents. NPR claims that gentrification not only doesn't increase the likelihood that lower-income occupants will move out of a neighborhood, but that those who do stay reap benefits, ranging from "new parks" and "safer streets" to higher credit scores.

Of course, it stands to reason that those who can afford to stick around as an area gentrifies are richly rewarded. But even if this were the case across the board, we should be concerned that the most dependable way to ensure economic and infrastructural investment in struggling, low-income and, most importantly, black neighborhoods (such as Anacostia, Deanwood and Columbia Heights) is to have white people with money move into them.

Gentrification in Atlanta has caused the respective rise and fall of the city's white and black populations for the first time since the 1920s, according to the New York Times. Brookings Institution demographer William Frey said, "There could be a time in the not-too-distant future when the black population is below half of the city population, if this trend continues." (Atlanta is currently 54% black.)

The irony, according to Bloomberg, is that white conservative Georgia voters outside the city have consistently opposed measures to revitalize this now-gentrifying civic core, most notably by blocking plans to expand the city's public transportation system. But some wonder whether projects like the Beltline, a new rail network and green space currently under construction, are themselves actually just draws for, or even byproducts of, gentrification.

The racial dynamics of gentrification are perhaps no better illustrated than in Chicago. In a telling article, NPR's Gene Demby reported that the size of a Windy City neighborhood's black population — as exemplified in areas like Englewood, Austin and Roseland, all more than 85% black — directly correlates with the speed at which it gentrifies.

His source is a study by Harvard researchers Robert Sampson and Jackelyn Hwang. Sampson refers to this phenomenon as "'white avoidance' — [gentrifiers are] not moving into neighborhoods where there are lots of black people."

"In Chicago," he said, "the [neighborhoods] that are gentrifying are the ones where there was a white working class, or Latinos, but not many blacks."

This is especially interesting when you look at how this pattern plays out in other cities. Williamsburg and Greenpoint, viewed as the hotspots for gentrification in Brooklyn, New York, supports Sampson's point. Both had large Polish-American and Latino populations before the influx of gentrifiers, but very few blacks. Similar claims can be made about Boston and Seattle, the top two (and statistically whitest) cities on this list, while historically black neighborhoods like Harlem and Bedford-Stuyvesant are "outliers," according to the report.

Of course, this doesn't change the fact that, due to policies like redlining and government-sanctioned housing discrimination, the people most likely to be affected by rising home prices in urban cores are black or brown. It just means that gentrifiers may tend to gravitate toward poor white neighborhoods first. It's hard to say whether people should be happy or extremely offended by this.

The takeaway: And so it goes, the constant geographical shuffling of low-income people at the behest of those with money.

Many cities have undergone such radical shifts in recent years as to be nearly unrecognizable. There are more to come: The New York Times recently calculated gentrification rates by determining which cities have seen the biggest influx of recent college graduates between 2000 and 2012. Places like Houston (50% uptick), Nashville (48%), Denver (47%), Austin, Texas (44%), and Portland, Oregon (37%), top the list, with D.C. (36%), Buffalo, New York (34%), and Baltimore (32%) not far behind.

It's a phenomenon that hides within it all the racial and class tensions that define American history. If only all people could share in its spoils, and do so without relying on influxes of wealth and white people.