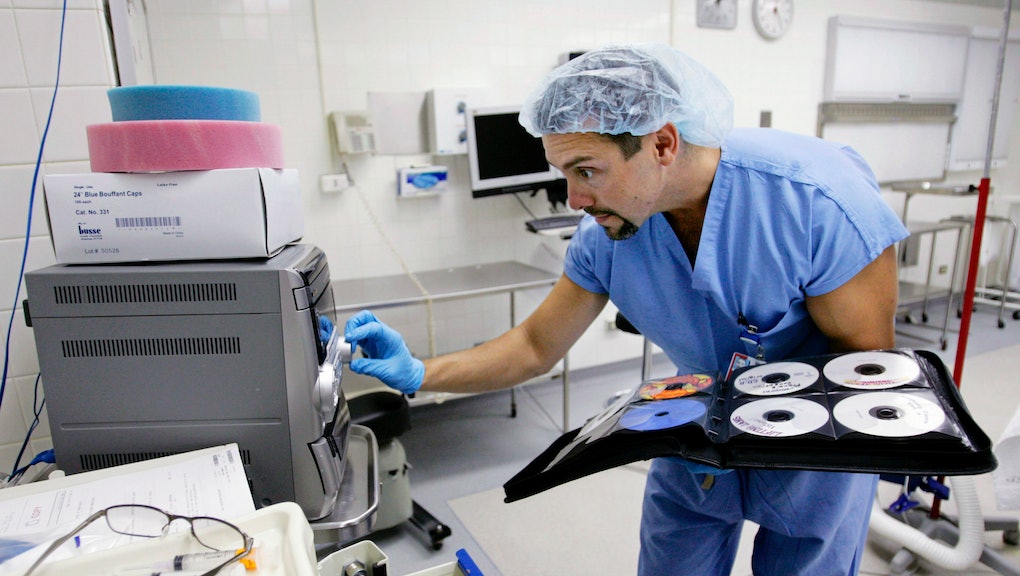 Why You Should Make Your Doctor Listen to Music, According to Research

We listen to songs to mirror our emotional states: To pump ourselves up, calm ourselves down and wallow in moments of loneliness. But music's effect extends far beyond offering such feelings of comfort and nostalgia: it materially affects our health. And one strong example is its role in operating rooms.

Multiple studies have shown that playing background music during a surgical procedure positively affects not only the doctor's performance, but also the patient as he undergoes and recovers from a procedure.

Background music is present in operating rooms the world over. In a recent study conducted in the U.K., 90% of surgeons confirmed that they listened to music throughout their surgeries, be it rock, classical or country. Their main goal when picking music was to listen to something familiar, or as Ben Challacombe, a consultant urological surgeon at Guy's and St. Thomas' NHS Foundation Trust in London, told the Guardian, "Old favorites ... familiar, reassuring tunes — interesting, not elevator music, but not distracting either."

When listening to something familiar, nurses report that surgeons are able to achieve an inner calmness that steadies their hands and aids their performance in an unnaturally high-stress environment.

That isn't just an observation, though. A 1994 study found particularly experienced practitioners benefited from listening to music, and a 2008 study found the same (though they noted that novice surgeons are more easily distracted by tunes). When music is played during surgery, surgeons demonstrate higher concentration and lower stress levels, which enables them to execute tasks far more adeptly.

Perhaps most strikingly is the effect music has on the patients. Several studies have proven that patients experience reduced anxiety when they listen to music just before and during surgery. One study found that patients' anxiety dropped nearly 66% when music was played while they were in the operating room. They also had more relaxed breathing patterns during surgery, with an average of 11 breaths per minute as opposed to 13 breaths per minute among the group that didn't listen to music.

"There's no question, music reduces anxiety before surgery," Zeev Kain, an anesthesiologist at Yale University, told the Guardian. "It will decrease the amount of pain or anxiety medication a patient needs."

It's shocking but true: Music affects how much medication patients require. Because patients are so relaxed, they then physically require less sedative medication (anesthetic). The Yale study found that when patients were in control of their anesthesia (yes, patients can sometimes control their own levels of anesthesia), they would use less when they listened to music through headphones, meaning they were essentially more tolerant of pain.

And in the end, calm surgeons and relaxed patients make for an amazingly successful surgery, all thanks to simply playing background music. Even after the patient gets home, they recover quicker and report higher satisfaction rates on their overall medical experience. This is the ultimate proof that music really can heal.