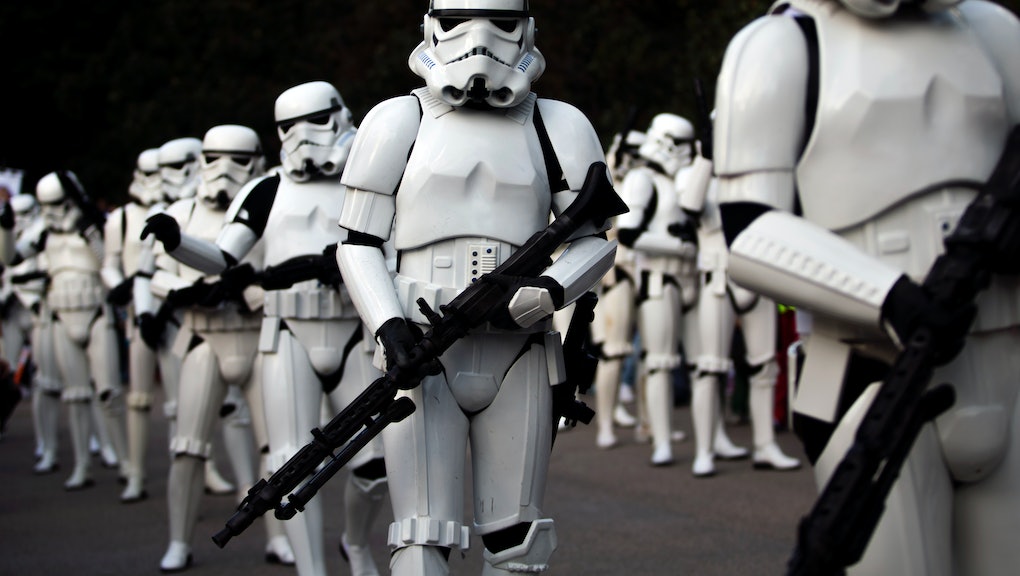 The news: Ever wonder what a laser blast would actually look like? Well, scientists at the University of Warsaw and the Polish Academy of Sciences did. So they figured it out:

Not quite as impressive as the ones in science fiction films like Star Wars, but it's still pretty cool.

According to the scientists, the photo represents "a light pulse fired from a 10 [terawatt] laser, dispersing into water vapor. The blue glow is laser light, the source of the other colors is mainly plasma fiber."

How'd they do it? You'll be happy to know no Bothan spies died to bring us this laser technology.

In fact, the Laser Centre at the Polish Academy of Sciences already had a powerful laser. Like avoiding Imperial entanglements, photographing the laser is the real trick.

Cameras recording billions of frames per second in one sequence do not exist. In order to film the traveling laser pulse, researchers from the Laser Centre of IPC PAS and FUW used an earlier known trick. A suitably adapted camera was synchronised with a laser generating laser pulses at a rate of approx. 10 shots per second. It was done in such a way that with every subsequent pulse the camera recorded an image minimally delayed than previous one.

Science fiction or science fact? A bit of both.

While the United States is experimenting with weaponized lasers, they don't look anything like the science fiction laser rifles we know and love.

The photo above is what a real weaponized laser looks like. It was a prototype of the U.S. Navy's Laswer Weapon System or LaWS. The Marines are planning on a similar laser system for shooting down drones.

These cumbersome, bulky, not-in-any-way sleek machines aren't what we think of when we hear "laser" but they're the closest we have.