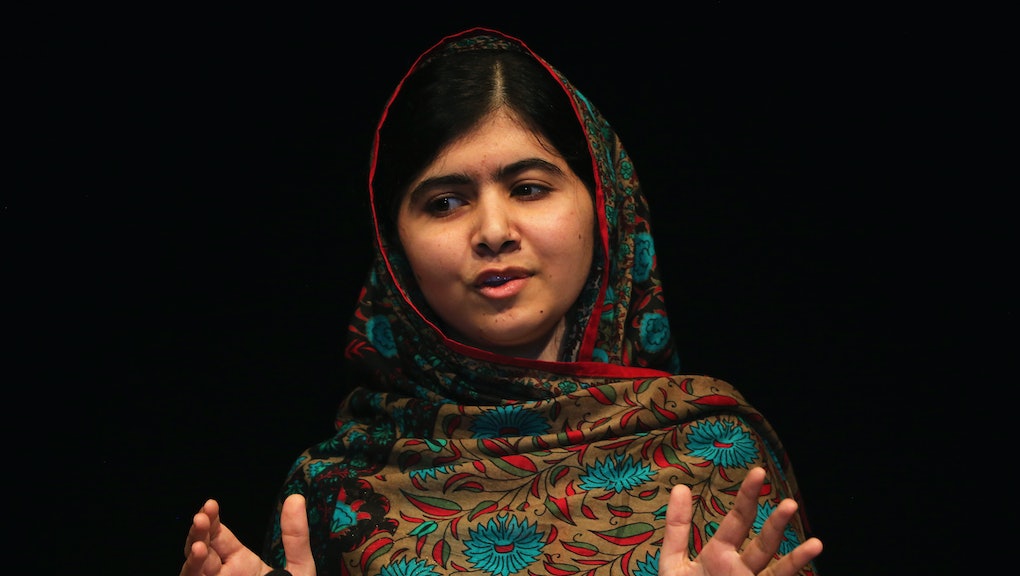 Malala Yousafzai Has a Wise Message About Terrorism for President Obama

The news: Malala Yousafzai, the 17-year-old Pakistani Nobel Peace Prize winner who survived a gunshot to the head by the Taliban for her efforts to champion girls' education, has a simple message for President Barack Obama: Instead of sending guns to other countries, send books.

At the Forbes Under 30 Summit in Philadelphia on Monday, she recalled her meeting with Obama.

"The money that is spent on weapons and wars, if that money is spent on education, it can really change the world," she told the audience.

Good timing: Yousafzai shared her thoughts on the same day the U.S. unloaded a cache of weapons from a C-130 cargo plane over the Syrian town of Kobani. The airdrops, which included ammunition and rocket-propelled grenade launchers, were meant to aid the Syrian Kurdish militia in their fight against Islamic State.

But some of the weapons ended up in the hands of IS fighters, according to video posted by a media group loyal to IS, the Associated Press reported.

The well-intentioned Kobani airdrop is just another example of poorly executed military strategy. Since early 2013, the U.S. has covertly armed and trained moderate Syrian rebels to fight IS and the government of Syrian President Bashar al-Assad.

The mission was to train 5,000 rebel troops every year. In April 2013, PBS documentary Syria Behind the Lines showed weapons being transported and rebels recalling their training programs in Saudi Arabia and Jordan.

Why it matters: In a still-classified CIA internal review, the agency concluded that previous efforts to send arms abroad were rarely successful and should inform the president's policy on Syria and Iraq. Failed proxy wars can be traced back through historical, military faux pas, the CIA suggests in its review.

The most stunning example yet, which should give pause to future Kobani-like airdrops, is the U.S. war in Afghanistan. When the CIA funded and trained mujahideen rebels to fight Soviet troops in the 1980s, the agency did not predict that the fighters will later form al-Qaida.

Clearly, no matter how much hesitance and careful calculation is taken to give arms to Kurdish fighters or moderate Syrian rebels, American weapons can always end up in the hands of IS- and al-Qaida-linked groups.

Yousafzai's message to Obama resonates amid the dizzying crisis in Syria and Iraq.

"The best way to fight terrorism is to invest in education," she said. "Instead of sending weapons, send teachers."