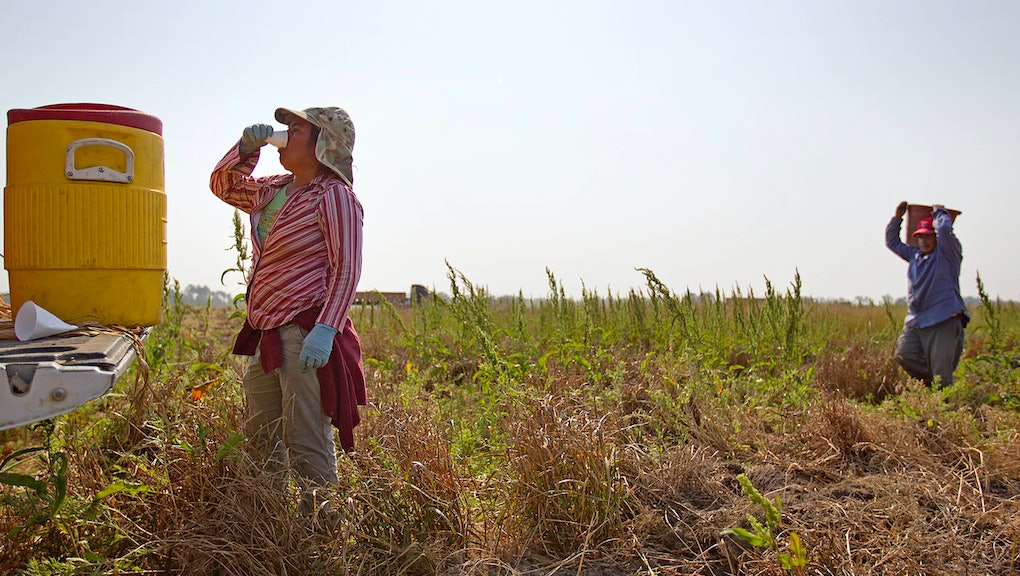 Modern-Day Slavery Still Exists — And It's Thriving Across America

Each year, scores of people are lured to the United States by the promise of a green card, a steady job and the chance of a new start. A prospective employer tells them that the opportunities are endless, that their families will thank them, that the only place to go is up.

But here's the sad reality that no one seems to be talking about: Each year, these immigrants become victims of labor trafficking. They perform their jobs under force, fraud or coercion. They face pay that is less than minimum wage or less than they were promised. In order to keep them trapped, employers often use extortion, sexual abuse, psychological manipulation, torture and violence.

The criminality of labor trafficking is a parallel to slavery, according to a new report by the Urban Institute, a nonprofit organization, and Northeastern University. And it's happening every single day in America.

How does this happen? All too easily. Due to their backgrounds — many may not speak English well or know their legal rights — immigrants, legal or not, are exceedingly vulnerable to such abuse.

It works like this: A person living overseas, most likely in Asia or Latin America, hears about a job opportunity from someone he or she knows. It will allegedly lead to a green card, but first, the person must pay a large sum — $6,150 on average — which often puts his or her family into debt.

When the immigrant arrives in the United States, he or she might discover that the job isn't what was advertised. As Vox points out, if it was touted as a nursing job, it might be closer to domestic servitude. (According to the report, the most common jobs for exploitation are in agriculture, hospitality, domestic work, construction and restaurants.)

Even if the immigrant has a job in which interacting with the public is required, they often won't disclose their abuse for fear of repercussions; their employers will threaten them or their families with violence, or they'll tell them that their immigration status negates any protection under the law. (This isn't true. Migrant workers are afforded some basic labor rights.) The fear of employers taking away immigration documents also comes up often.

Seventy-one percent of the workers surveyed arrived with a visa, which goes against the common perception that labor-trafficked immigrants enter the country illegally. Employers will also often hold on to immigration documents until they expire and then threaten the worker with deportation.

One survivor told researchers that when she made a "mistake," they barred her from eating for four days. One trafficker's son boasted about "going hunting" for workers who attempted to leave. Another worker was told, "If we killed you, who would know?"

And there's not much legal recourse. According to the report, only half of the identified traffickers were arrested. There are zero service providers nationwide funded entirely to fight for labor-trafficking survivors, which helps explain why few victims ever receive restitution for the crimes.

As the Washington Post points out, there's no primary government organization devoted to these kinds of investigations. The Labor Department, for example, doesn't have any criminal authority. There are coordination issues with different law enforcement agencies, "and even if U.S.-based recruitment agencies do run into legal trouble, they can very easily shut down and reopen as new ones, circumventing any sort of visa blacklist," the Post reported.

The traffickers weren't always your typical bad guys, either. Meredith Dank, one of the study's lead authors, noted that "One person even said their trafficker was a judge, and when they hosted a dinner, law enforcement were there at the table."

The study suggested law reform — at both a state and federal level —  as well as specialized training so law enforcement agents can better recognize and combat labor trafficking. Public recognition, it stresses, is also necessary. The public is "largely unaware that crimes resembling slavery take place in America," it cautioned.

This has disastrous consequences for survivors, many of whom have nothing and nobody to rely on when they escape. They may be unseen, but they exist, and they need support.