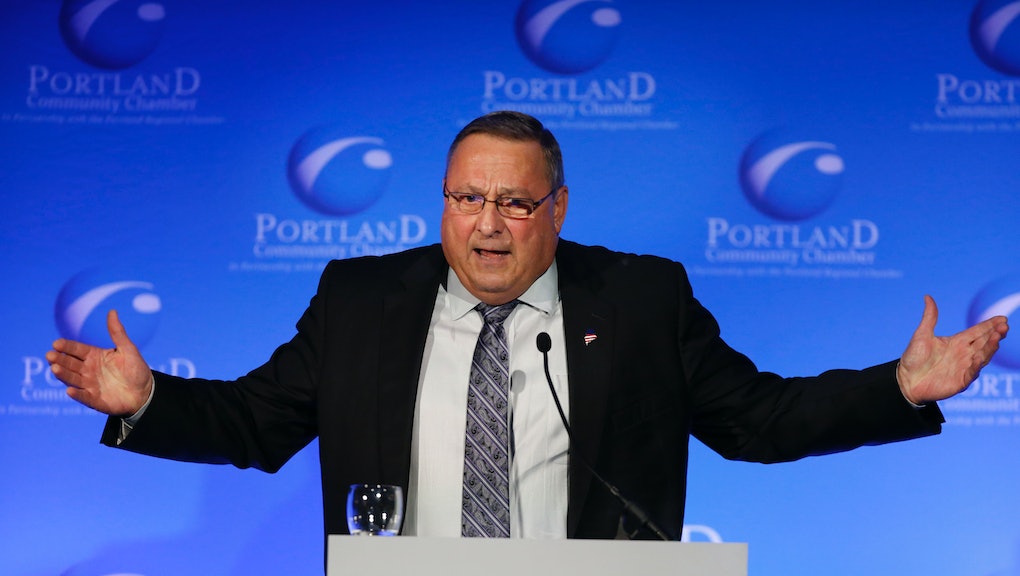 The trend of Republican candidates not knowing how to deal with Obamacare is still going strong. The latest victim? Maine Gov. Paul LePage.

LePage stumbled around the subject during a recent debate with Democratic opponent Mike Michaud, either not understanding or willfully ignoring the specifics of health care reform. Case in point: As the Huffington Post points out, he proclaimed his desire to "find a way" to cover Maine's 70,000 uninsured residents, even though earlier this year he vetoed the Medicaid expansion that would have done that at no cost to the state.

There's more: When pressed about his refusal to expand Medicaid, LePage's response wasn't entirely coherent. "I do agree, there are people under the federal poverty level," he said. "They need to be able to go to the exchanges. The federal exchanges will allow anyone from 100% on up to 400% to quality for large subsidies. We need to maximize that aspect of it. Take those that do not qualify and then find a way to get them insurance."

Those exchanges, of course, are part of Obamacare. The Medicaid expansion is a vital aspect of the legislation; it's how those under the poverty line, the ones LePage is referring to, can get coverage. Private insurance outside the exchanges, as the debate moderator pointed out, tends to have deductibles that are unaffordable for those at the lower end of the economic scale.

LePage blamed that on Obamacare, too. "Yeah, well that's ACA," he responded. "The ACA has changed the entire system." Private insurance being hard to afford for those people, though, is exactly one of the reasons the Affordable Care Act was passed.

Not the only one: Other Republicans are having similar issues talking about a major policy point that is still relatively unpopular in the abstract but ranges from accepted to well-liked on a specific basis.

Senate Minority Leader Mitch McConnell (R-Ky.), for instance, said that Obamacare needs to be pulled out "by the roots" but insists that Kynect, the state's popular and successful health care exchange, can stick around. Kynect, of course, is inseparable from the Affordable Care Act.

Ohio Gov. John Kasich, meanwhile, has said that he wants to fully repeal Obamacare but keep the Medicaid expansion in place. As the Washington Post explains, that's not so easy. All of these parts work together to create one big law.

This kind of double-speaking serves LePage and other Republicans' purposes to an extent, since they can fire up the base by calling for repeal while still defending the law's popular parts, but that strategy leads to logical lapses like those above. And with Election Day just a few weeks away, voters are likely to catch on.