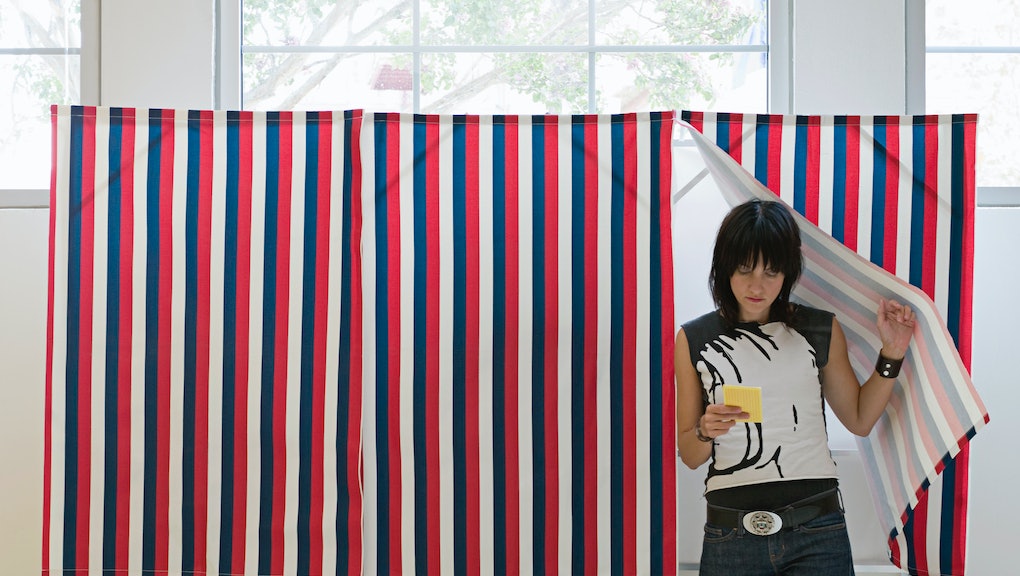 Why are young voters going to show up in such small numbers on Election Day?

The evidence suggests a worrying drop in enthusiasm this year. A recent Pew Research Center poll showed that just 5% of adults under 30 are following the 2014 midterms closely, and there's no scarcity of data indicating that young voters will turn out in lower numbers than they did in the 2012 election. A survey by Harvard's Institute of Politics earlier this spring indicated that young voters are even less inclined to vote during this year's midterms than they were in the last midterm elections four years ago, with fewer than 1 in 4 saying they "definitely" plan to vote in November.

The shallow, conventional explanation to this decline in voter participation relies on the outdated notion that Millennials are indifferent to political life, unprecedented in their apathy and Facebook-induced self-obsession. But there are stacks of empirical data that show Millennials to be exceptionally politically engaged and civically conscious. And it's common knowledge that these voters were essential to the political rise of President Barack Obama.

How can we reconcile these contradictory notions? The fact is there are larger forces at work that lead young people to stay home on Election Day:

Voting ain't easy: Anything that makes it difficult to vote affects young voters disproportionately, and there are plenty of obstacles that make voting unnecessarily inconvenient. Registration and voting hassles — perhaps you just moved to a new state, or can't afford to take time off from a low-paying, hourly job that you squeeze in between classes — are more likely to affect a young person than someone who has a steady job and a stable life.

A recent report showed young Americans are about twice as likely to move as older generations, meaning they're less likely to have up-to-date voter registrations from one election cycle to the next.

And the Republican Party has an extensive track record of preying upon this reality and interfering with any measures taken to making elections more accessible. Take Ohio as an example. Young and low-income voters were empowered by early voting in the state until the GOP devoted itself to destroying the policy, as reported by Mother Jones.

Why vote if the game is rigged? Alongside the logistical challenges of getting to a voting booth is a pervasive skepticism that it's even worth voting at all.

The aforementioned Harvard poll showed that faith in political institutions and processes are extraordinarily low: Only 14% of young people believe Congress does the right thing most of the time.

The 113th Congress is poised to be the least productive in six decades, and you don't have to be a political junkie to sense that Washington can't seem to get things done. Why would young Americans commit to voting for a Congress that has failed them?

Even among those who do think it's worth shaping Congress, youth voters are especially prone to feeling overwhelmed by a sense of futility when voting in uncompetitive congressional districts. That's increasingly the case, given America's skewed representation thanks to gerrymandering, as Abby Kiesa at the Center for Information and Research on Civic Learning and Engagement told Mic.

Cult of the presidency: Finally, consider political education and socialization in this country. Civics education, to the extent that it exists, is poor, and modern American history is understood mainly through the lens of presidents molding the world in their own image. There are many things lost in the Great Man theory, not least of which are the other elements of representative democracy that citizens can have a voice in. Young people were electrified by Obama, but they don't know how to find inspiration when politics veers away from studying big personalities and identity.

Justified as their frustration may be, the tragic irony is that youth disillusionment with Congress and institutional politics is likely to reinforce the status quo that makes them cynical.

A large turnout of young voters wouldn't turn the world on its head, but it would tilt the board for many issues that matter to them most, whether it be student debt, civil liberties or women's rights.

Collectively, the younger generation of this country is a force to be reckoned with. But if we take that for granted, then we ourselves will be taken for granted, too.