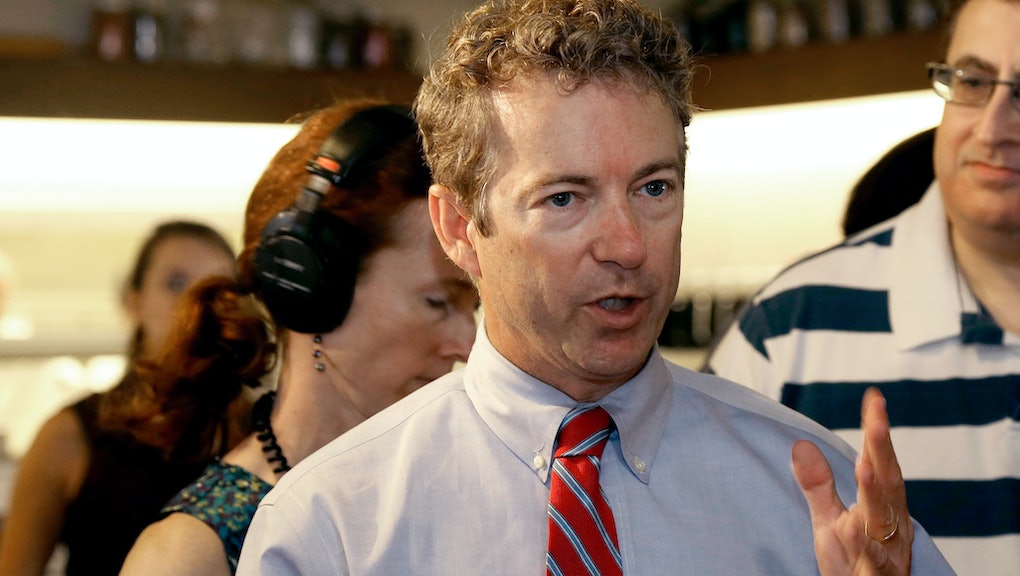 TIME Magazine crowned Sen. Rand Paul (R-Ky.) as the "most interesting man in politics" earlier this week. The potential 2016 presidential candidate is interesting indeed — but not necessarily in a laudable connotation. Some of the words that come out of his mouth are as questionable as the turtlenecks he wears.

Paul has been slammed recently for his comments about the Ebola virus that many have labeled as "irresponsible" and, frankly, blatantly untrue. This isn't the first time Paul has chimed in with some dubious words of wisdom.

Here are five topics on which Paul has offered some "interesting" insights.

"If someone has Ebola at a cocktail party, they're contagious and you can catch it from them."

Two notes for further reflection on this quote: 1) Ebola can only be spread through the direct touching of an infectious person, namely their bodily fluids. Don't know what type of cocktail parties Paul goes to. 2) Paul is a physician.

"The minimum wage is a temporary thing. It's a chance to get started. I see my son come home with his tips. And he's got cash in his hand, and he's proud of himself. I don't want him to stop there. But he's working and he's understanding the value of work. We shouldn't disparage that."

Except for the 3.3 million people who make the minimum wage — or less. Minimum wage didn't seem to be so "temporary" for them.

"I don't see so much that women are downtrodden. I see women rising up and doing great things. In fact, I worry about our young men sometimes because I think the women are outcompeting the men in our world."

That one speaks for itself – no further comment necessary.

"I think we should go to a million to one."

This was Paul's suggestion for a student-to-teacher ratio in the future — because, you know, technology and stuff. On the other hand, the Center for Public Educations says, "A class size of no more than 18 students per teacher is required to produce the greatest benefits."

Yes, Paul, you certainly are interesting. Here's to an interesting presidential election, if — more likely, when — he decides to run.