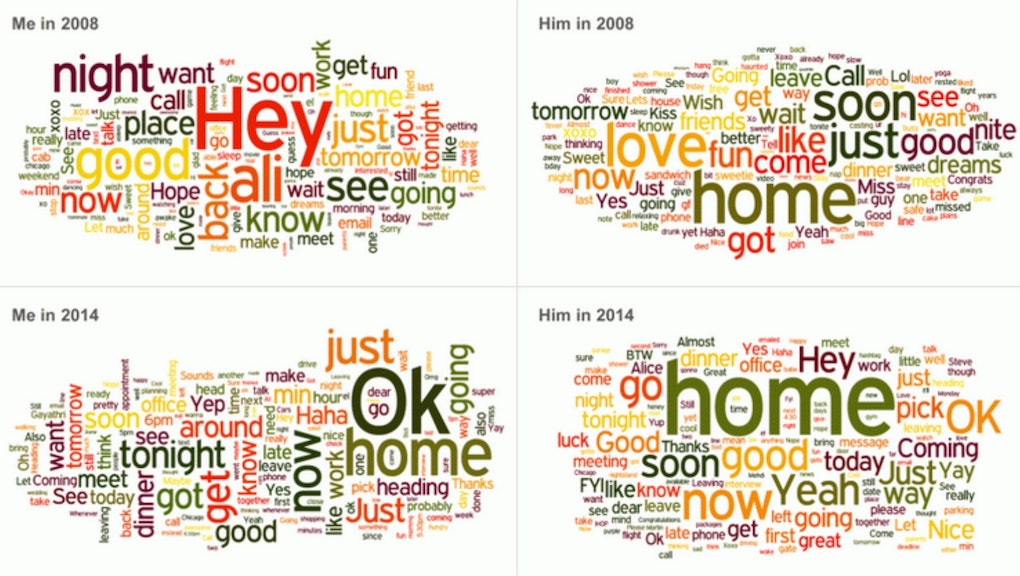 Here's What Happens to Your Text Messages After You Get Married

The news: On their first wedding anniversary, data blogger Alice Zhao received a unique present from her husband: a collection of every single text message they sent each other while dating. Now, for their sixth anniversary, Zhao has one-upped her husband in a rather fitting way by analyzing how their texts have changed during their courtship, engagement and marriage.

The result is a fascinating look into a couple's changing relationship with kernels of universal truth about love and communication:

1. When you know each other well, you get straight to the point. Once you're married, there's no need to waste time on pleasantries. Instead, the focus is more on keeping the peace.

"As for me, my early twenties self frequently started conversations with the term 'hey,' and more recently I seem to have decided to no longer greet my husband, but instead agree with most of the things he texts me," Zhao wrote.

"The main difference is that while we were dating, we didn't see each other every day, so a lot of our communication had to happen via text. We'd often message the other person to see what they were doing or tell them that we were thinking of them," Zhao said. "As a married couple, since we're together all the time, we set up date nights and say sweet things to each other in person, so texting is mostly used to confirm logistics or share random thoughts."

3. You miss each other at different times of the day. The timing of the texts also reveals when you and your partner actually think about each other: When you're separated. And it makes sense that you're apart more during the night when you're dating, and during the day when you're married.

"While we were dating, we started thinking about each other around 3 p.m. in the afternoon and we'd send each other text messages until 3 a.m. in the morning. As a married couple, our texting schedule has pretty much flipped. We text all through the workday and never at night," Zhao said.

4. Your relationship changes, but that's not necessarily bad. While Zhao's analysis revealed that she and her husband are no longer sending sweet nothings to each other at night, that doesn't mean their relationship is any less romantic. It just means they can say those things in person and keep their text conversations to simple, practical matters.

"Our text messages became more predictable, but only because all of the unpredictable things were said in person. We no longer have to text 'I love you' from a distance in the middle of the night. I can now roll over, snuggle with my husband and whisper it into his ear," Zhao wrote.

And really, a text message can't beat that.