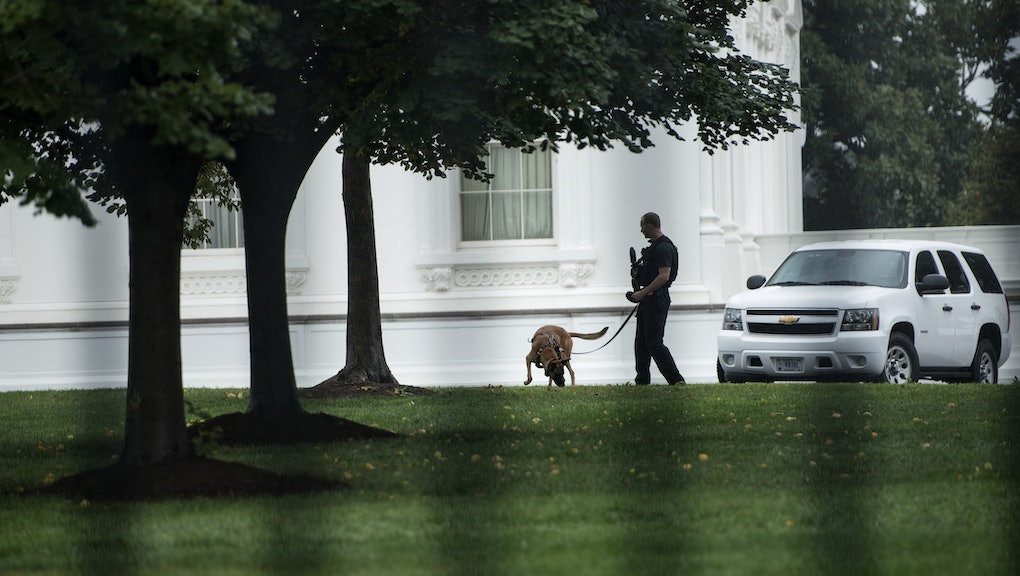 The two most popular attack dogs in Washington right now aren't the kind we usually hear about, and they could teach the rest of us a thing or two about courage in the face of adversity.

Two Secret Service hounds — actual dogs delightfully named Hurricane and Jordan — succeeded where their fellow Secret Service humans have failed, teaming up Wednesday night to take down a 23-year-old man who jumped the White House fence in a dramatic confrontation that left both dogs injured.

The intruder, identified later as Dominic Adesanya from Bel Air, Maryland, was immediately set upon by the K-9s. He tried to fight back, kicking the first one square in the snout.

Undaunted, the second dog surged ahead, driving the intruder into the North Lawn turf. Adesanya threw a few punches during the ensuing scuffle, which didn't end until officers finally closed in and arrested him. He's been charged with two felony counts of assault on a police officer (the dogs), four counts of resisting arrest and unlawful entry and one count of making threats, per CNN.

Watch the video of their canine valor below:

The warrior watchdogs are Belgian Malinois, a breed similar to the German Shepard, the same that joined Navy SEALs in the mission to kill Osama bin Laden. After the incident, they were taken to a vet who attended to their bumps and bruises. The Secret Service, in an email to the Washington Post, said that both canines were treated and "cleared for duty."

Their sparring partner didn't fare so well. He was chomped and gnawed on enough to require a hospital visit.

After the video emerged Wednesday night, tweets praising the dogs' heroism (and mocking the rest of the Secret Service) started pouring in:

Still, not everyone was totally satisfied:

Due to the nature of their work, the canines have not been made available for comment. Their bosses at the Secret Service have been equally quiet on the subject of how, yet again, someone managed to scale the fences surrounding the White House.

In September, a man with a knife cleared the fence, then dashed through the front door and passed the stairway leading to the first family's living quarters before being tackled. The Obamas were not home at the time, but Director Julia Pierson resigned after the extent of the breach was revealed.

Needless to say, dogs are awesome, deeply patriotic beings who deserve our love and respect. Let's just hope our elected officials see fit to tackle the issues of the day with the same force and conviction these two superstars used in taking down this latest gate-crasher.