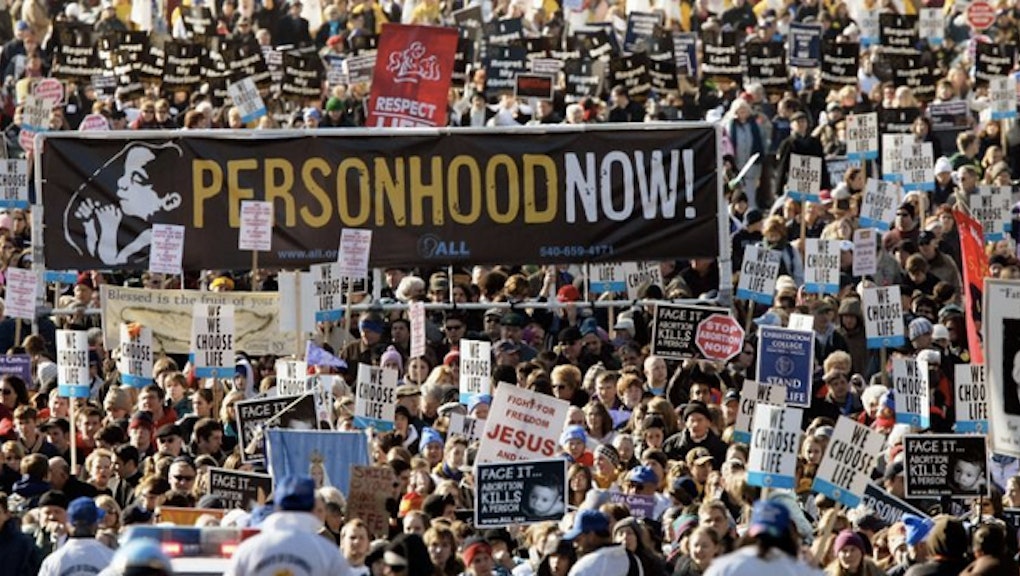 Personhood amendments — extreme initiatives that generally redefine life as beginning at fertilization — are lining ballots this coming midterm election season, and in North Dakota this amendment has a very good chance of passing. So why isn't anyone talking about it?

The personhood amendment — called Measure 1 on North Dakota's ballot — was passed by North Dakota lawmakers in March 2013 and is now seeking voters' approval to redefine personhood in order to include a fetus: "The measure, upon voter approval, would amend the state constitution to provide for the 'inalienable right to life' at every stage of human development."

In the context of this bill, "Every stage of human development" includes conception and every consequential stage of fetal development. The intention is to further chip away at the abortion rights granted by Roe v. Wade by redefining part of a woman's body as independent from that woman. The ultimate result, presumably, is that abortion would be criminalized, since it could be prosecuted as the act of killing a living person.

What is terrifying about this amendment is that it's attracted so little attention. ThinkProgress suggests that "Amendment 1 may be flying under the radar because it doesn't specifically mention abortion, birth control, or conception. It's an extremely vague measure. ... In fact, its supporters have pointed to the broad language as proof that Amendment 1 isn't a personhood issue at all, claiming it has nothing to do with redefining life."

Indeed, most reproductive justice efforts this midterm electoral season focus on congressional races rather than ballot measures. So while, for example, pro-choice, pro-women entities like Planned Parenthood are calling attention to a handful of races where a candidate has either proposed personhood legislation or is adamantly anti-abortion, very little attention is being called to equally dangerous anti-abortion ballot measures.

Republican Rep. Cory Gardner of Colorado, mentioned in the tweet above and who is challenging incumbent Sen. Mark Udall for his seat, has gone so far as to sponsor a federal personhood amendment. This amendment defines personhood as including "each and every member of the species homo sapiens at all stages of life, including the moment of fertilization, cloning, or other moment at which an individual member of the human species comes into being." Something that Stephen Colbert had a field day with on his show last week.

Infuriated by the erosion of reproductive rights across the nation, Lizz Winstead's Lady Parts Justice is raising awareness about these measures. LPJ's website notes that North Dakota's ballot measure is just the latest incarnation of the state's attacks on women. Currently, "[t]here is only one abortion clinic left in the state with 137,050 women of reproductive age," and that "[i]f a woman is impregnated by rape, North Dakota allows the rapist to sue for custody and/or visitation."

While it's true that so far, personhood amendments have struggled to find supporters, the ballot measure in North Dakota may be subtly phrased enough as to assuage voters' concerns. Plus when these types of bills go undetected, they sometimes slip through the cracks. Who thought that Proposition 8 would pass in California, effectively banning gay marriage for millions of Americans? Not the crowds of Obama supporters who danced in the street in November 2008.

And the measure is already polling favorably, with the latest poll indicating that 50% of North Dakotans favor it.

This does not bode well for women. "Doctors," ThinkProgress reported, "have already said that Amendment 1 would likely force the state's only in vitro fertilization clinic to close, and ... the state's AARP chapter has expressed concerns that the measure would interfere with 'personal and family decisions.' ... And the North Dakota Medical Association, a group that represents doctors practicing in the state, officially opposes Amendment 1 because of "the imprecise wording and unknown consequences."

But there is still time. The election doesn't happen until Nov. 4.

That means the power is still in the hands of North Dakotans to preserve a woman's personhood.