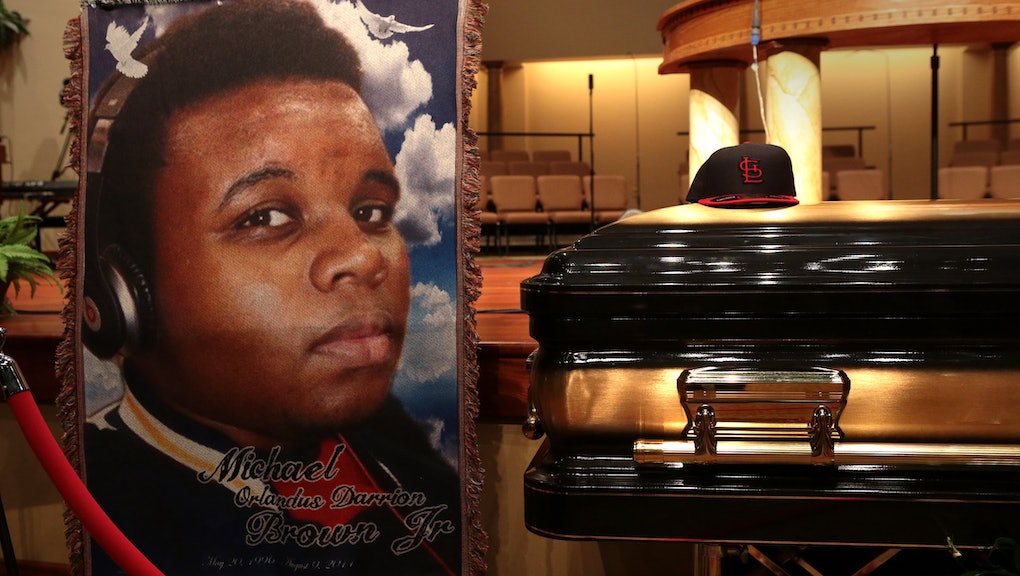 There Will Never Be Justice for Michael Brown

More than two months after he was shot dead in the street by a Ferguson, Missouri, police officer, 18-year-old Michael Brown has been targeted again, this time by a series of leaks from people involved with or connected to the grand jury investigating the events leading to his death at the hands of Officer Darren Wilson.

What many have suspected since August is now clear for all to see: There will be no justice for Brown. Those tasked with seeing that justice is served are actively impeding a fair and independent consideration of the facts. And everything that the protesters fought for — and were assured would happen — is at risk of being lost.

The "new information:" The most recent leaks in Ferguson represent a direct appeal to public pressure points meant to exonerate Wilson and impugn Brown.

There is talk of "blood spatter analysis, shell casings and ballistics tests" used to prove Brown tried to grab Wilson's gun. Scared of the evil weed? You should know that Brown, according to the "sources," had enough marijuana in his system that he might reasonably have "suffered hallucinations." How about those terrible reports he was shot with his hands up? Well, there's a new autopsy report out showing that wasn't possible.

The new details are wide ranging but follow a common thread: Each one, in the way it is presented, stands to bolster Wilson's version of events and discredit any other account.

Poisoning the well: So, why is all this such a big problem?

To start, much of the same information printed in the Washington Post, New York Times, Los Angeles Times and aired on CNN also appears in the St. Louis Post-Dispatch, the most-read news source in the region. A prosecutor trying this case, assuming Wilson is ever indicted, would find it nearly impossible to find a pool of jurors without a lot of "knowledge" about the case — a crucial prerequisite for a fair trial.

If the grand jury decides not to charge Wilson, prosecutors will count on these leaks to counter outrage and support from outside the community,

The Washington Post was among the first to publish the leaks, sourcing them to "people familiar with the investigation." Make no mistake, that's a veiled way of saying, "The office of the prosecutor and individuals on the grand jury, or people with access to what they're hearing." The story, titled "Evidence Supports Officer's Account of Shooting in Ferguson," serves up a point-by-point rebuttal to almost all the publicly available evidence suggesting the shooting was not legally justified.

The most controversial element of the report surrounds "analysis" of the autopsy report, first obtained by the Post-Dispatch earlier in the week. Again, the driving argument in all the stories fueled by the leaks — the New York Times published an article with similar information — is that forensic evidence shows that  Brown was shot in the hand during a close, violent altercation with Wilson. They go on to corroborate what the officer has told investigators, which is that Brown fled after their initial scuffle, then turned around and ran back at the cop car. That is when Wilson says he fired the fatal shots.

But less than a day after the report went public, one very important detail of the Washington Post piece had already come into question. Judy Melinek, one of two forensic pathologist quoted in their story, said her remarks were taken "out of context."

"Inappropriate" from the start: CBS News reports that Attorney General Eric Holder, head of the Justice Department, responded to the leaks by telling colleagues he is "exasperated" at the "selective flow of information coming out of Missouri."

The grand jury hearing the evidence is expected to make a decision on whether to charge Wilson sometime early next month. The Washington Post reports that "the pending decision appears to be prompting the unofficial release of information about the case and what the jurors have been told."

Translation: By leaking this information, prosecutors are either preparing the public for the news that Wilson will not be indicted. Or they are doing their best to influence the jury pool before the case is tried.

"Since the release of the convenience store footage there seems to be an inappropriate effort to influence public opinion about this case," Justice Department spokeswoman Dena Iverson said in response to the leaks.

Iverson was referencing Ferguson Police Chief Tom Jackson's decision, six days after the shooting, to make public a surveillance tape that appeared to show Brown robbing a local convenience store. Hours after the video went public and the media began reporting that Brown was stopped in connection with the alleged crime, Jackson said at a press conference that the incident "does not relate to the initial contact between the officer and Michael Brown."

Huh? Then why release it?

"The press asked for it," Jackson said. Why did they ask for it? That was never made clear, but "the press" wouldn't have known it existed if they weren't tipped off by someone in Jackson's own office.

Coincidentally (or not), Ferguson police that day — again, nearly a week after the shooting — finally released the name of "the officer," Darren Wilson.

"It's a diversion," Eric Davis, a cousin of Brown's mother, told CNN at the time. "And it's an attempt to smear Michael's character."

Patricia Bynes, a protest leader and committeewoman for Ferguson Township, responded to this latest indignity by stating what has become increasingly clear in the more than three months since the unarmed black teen was killed:

"The whole damn system," she said, "is guilty as hell."

Another prominent local official and unofficial protest spokesman, St. Louis alderman Antonio French, tweeted in the aftermath of the leaks:

The hits keep on coming: "There's really nothing to investigate," St. Louis County prosecutor office spokesman Ed Magee told reporters who asked if his colleagues would seek out the source or sources of the leaks. "We don't have control over anybody leaking anything. All we can control is people in our office and the grand jury, and it's not coming from us or the grand jury."

This isn't the first time this month supposedly "secret information" from the grand jury deliberations have been made public. On the morning of Oct. 1, a women who has since deleted her Twitter account posted a message to a friend, saying, "I know someone sitting on the grand jury. There isn't enough at this point to warrant an arrest." The prosecutor's office told the New York Times they would look into the matter.

If any further action was taken, it is, ironically, still under wraps.

Case closed: This latest turn in the investigation fits seamlessly into a pattern of behavior from local police and the country prosecutor's office dating back to the hours and days after Brown was killed.

The intervention of the Justice Department, which could pursue civil rights charges if local authorities try to shut down the case, feels like the only hope for a fair outcome at this point.

But if it's left to officials in Missouri, we are left with one foul conclusion: The unarmed teenager shot dead on a suburban Ferguson street this summer will never get justice because his killer will never truly face it.