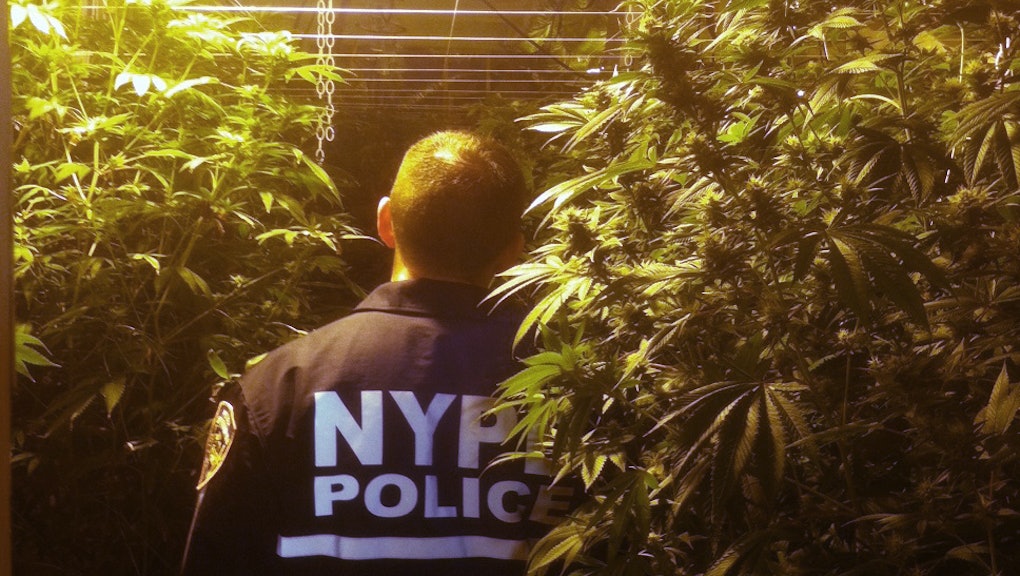 The news: In New York City, whether or not you get arrested for marijuana possession has a lot to do with whether you're black or Latino.

The arrests: The data shows a tremendous disparity between white and black marijuana arrests. In one of the starkest examples, the heavily black and Latino New York City neighborhoods of Washington Heights and East Harlem have marijuana arrest rates of 882 and 1,128 per 100,000 residents. That gives East Harlem, which is just 12% white, a marijuana arrest rate more than 110 times higher than the 81% white Upper East Side. Washington Heights has an arrest rate 110 times higher than the mostly-white Brooklyn neighborhood of Forest Hills.

This problem is about as widespread as can be, the authors write:

There is bias in the system: The plain racial disparity in who gets arrested over marijuana posession isn't because minorities happen to smokes more weed than their white counterparts. It's thanks to disproportionate enforcement overwhelmingly targeted at minority communities. Nationally, black people use marijuana at about the same rates as white folks. What's more, young white kids actually consume more marijuana than young black kids. Salon's Natasha Lennard wrote in 2011:

The Huffington Post wrote in July that 87% of marijuana arrests in New York City from 2002 to 2012 happened to black and Latino residents, basically concluding that New York's marijuana decriminalization measures essentially only apply to whites.

Why you should care: The Drug Policy Alliance report notes that the NYPD in particular seems to be targeting minorities aggressively, compared with other agencies responsible for law enforcement in the area. For example, the 45th Precinct, site of the massive Co-Op City housing complex, is 58% black and Latino but has one of the lowest arrest rates across the city. That's likely because Co-Op City, which is just 8.5% non-Latino white, is patrolled by its own independent department of public safety.

While New York City Mayor Bill de Blasio promised to change the New York police department's culture of disproportionate enforcement, the NYPD has actually made more low-level marijuana arrests over the six-month period from March to August than former mayor Michael Bloomberg did the previous year:

The new numbers set de Blasio on track to beat Bloomberg's final year of marijuana-related arrests. To put these incredible stats in context, the NYPD made just 800 marijuana possession arrests in 1991.

There are long-term problems associated with the tactics used in marijuana enforcement. A recent study found that stop and frisks can cause serious and long-lasting psychological symptoms like PTSD among those being frisked. It's hard to imagine that getting your life ruined with a marijuana arrest on your record would be any different.

Nationally, black people remain 3.73 times as likely to be arrested for marijuana possession as whites. Over the last 15 years, police departments have arrested more than 10 million people for marijuana-related offenses.

Even the NYPD knows the NYPD has a problem. The real question is: Will they fix it?