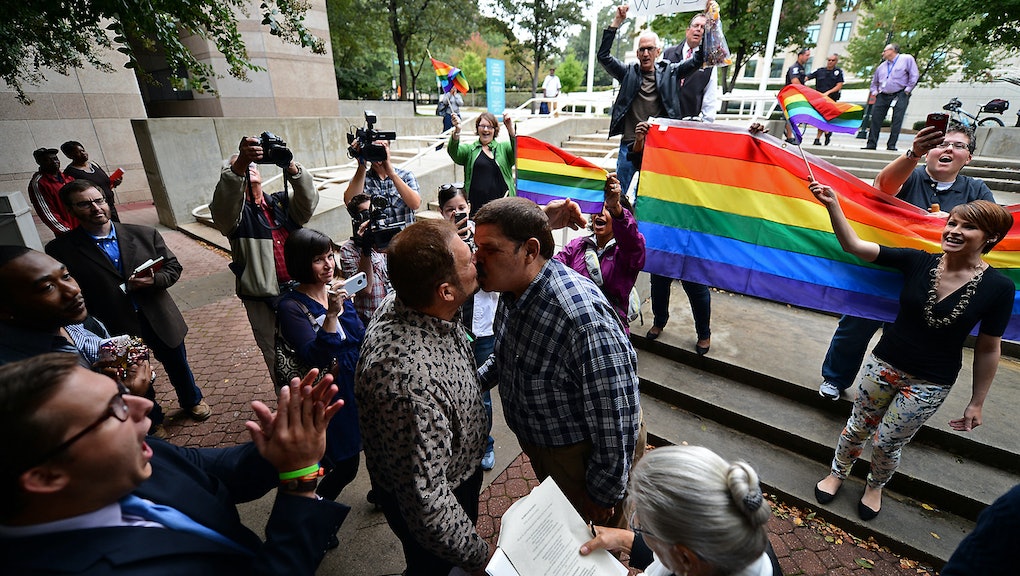 Besides federal recognition of their unions, couples in those states will now receive federal benefits, like Social Security benefits and the option of filing a joint tax return.

The move comes on the heels of a recent Supreme Court decision not to hear appeals in cases that legalized gay marriage in several states including Indiana, Oklahoma, Utah, Virginia and Wisconsin.

"With each new state where same-sex marriages are legally recognized, our nation moves closer to achieving full equality for all Americans," Holder said in a statement. "We are acting as quickly as possible with agencies throughout the government to ensure that same-sex marriage couples in these states receive the fullest array of benefits allowable under federal law."

How did this come about? In early October, the Supreme Court declined to hear a set of cases involving same-sex marriage, which allowed decisions favoring marriage equality in the lower courts to stand. In doing so, the high court effectively paved the way for gay marriage in 11 states; Saturday's announcement by the Justice Department was an expansion of this decision.

In his statement, Holder noted that same-sex marriages performed in Indiana and Wisconsin in June would also be recognized. The status of those marriages had previously been fuzzy; as USA Today notes, "Holder's statement clarifies that the federal government sees those marriages as valid."

Why it matters: The Attorney General made a similar announcement last week about seven other states — Colorado, Indiana, Nevada, Oklahoma, Utah, Virginia and Wisconsin. Saturday's announcement brings the grand total of states in which same-sex marriage is recognized by the federal government up to 32, plus Washington, D.C.

As Mic's Jared Keller noted, the Supreme Court decision in early October effectively made same-sex marriage legal in a majority of states. Now, that recognition extends to the federal government. We may not be all the way there just yet, but the era of same-sex marriage bans seems to finally be coming to a close.