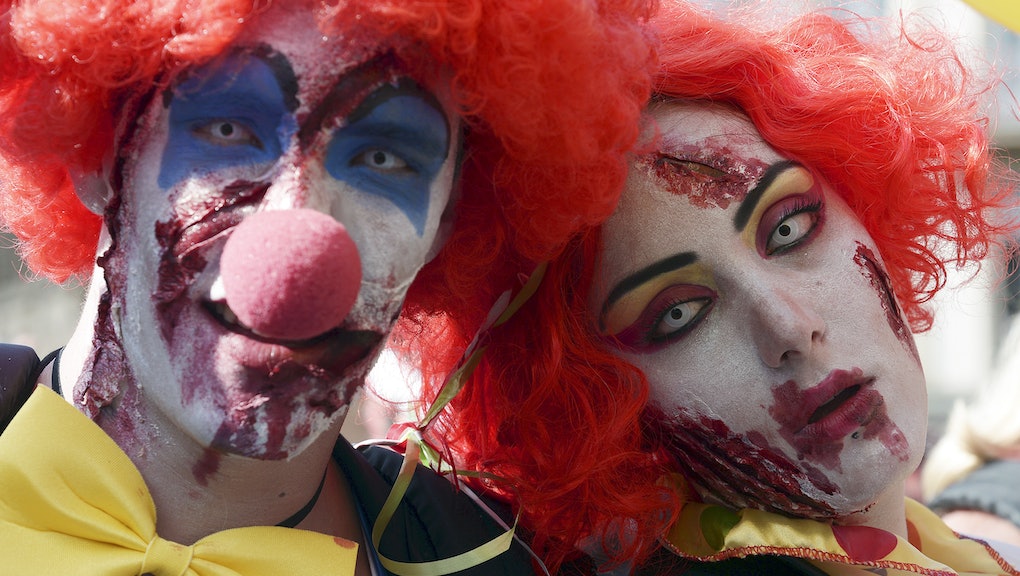 'Evil Clowns' Are Sweeping Through France

The news: If you've been feeling terrorized by American Horror Story: Freak Show's Twisty the Clown, perhaps it would be best if you stay away from France for the time being.

Since last month, the country has been besieged by a curious trend of people dressing up as clowns to harass and intimidate passers-by. But things took a turn for the dangerous over the weekend in the south of France, where 14 teenagers were arrested in clown get-up for carrying knives, guns and other weapons. And they weren't the only ones.

In the town of Montpellier, a man was arrested for dressing up as a clown and beating a pedestrian with an iron bar; other towns in the region have also reported multiple incidences of fake clowns terrorizing people with weapons, both real and fake. Things have gotten so out of hand that people have formed anti-clown vigilante groups, prompting the police to attempt to quell public hysteria.

"Since mid-October, a rumor inspired by videos published on the Internet is worrying the population about the presence of threatening and aggressive clowns in France," the national police said in a statement last week, adding that "despite numerous reports made to police, there have been only a few sightings of people dressed as clowns having fun scaring passers-by."

Clowns have been getting bad PR lately. France is far from the only country going through a deluge of scary clowns; with Halloween just days away, these public nuisances have been spotted in the U.S. and UK as well. But the current influx in France stands out not only because of the high number of incidents, but also due to worrying threats and violence.

And actual clowns are upset about how stories like this hurt their name and profession. Several international clown organizations have called out American Horror Story: Freak Show for perpetuating the "evil clown" stereotype, since most clowns are entertainers trying to make a living by making people laugh, not demented serial killers who look like this:

Yup, that's the stuff of nightmares right there.