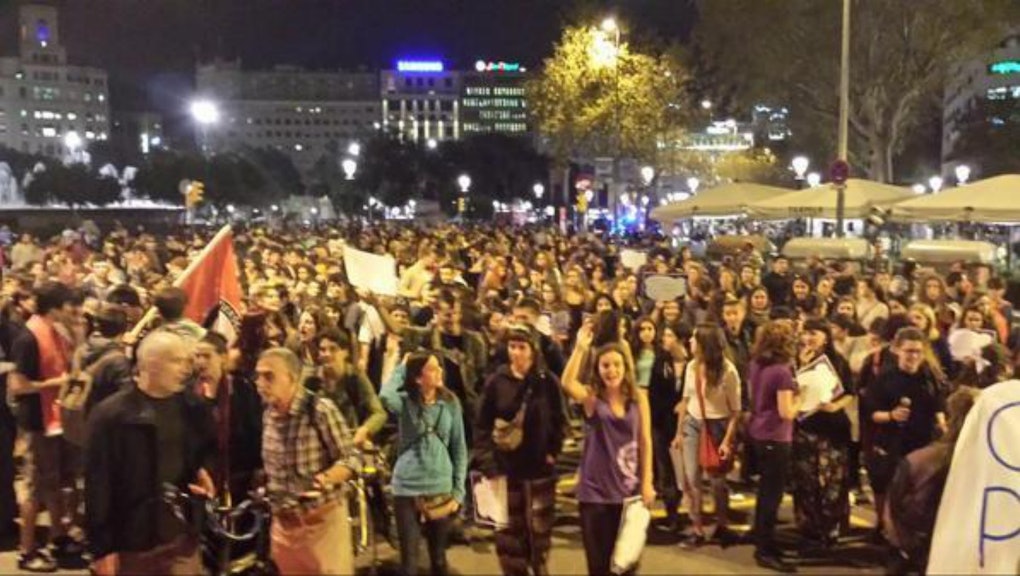 If the ongoing GamerGate saga and last week's disappointing reminder of Bill Cosby's rape legacy are disheartening America's feminists, they should cast across the Atlantic for a glimmer of hope.

What massive feminist strike, you say? Maybe you didn't hear about the thousands of Spanish feminists taking over Barcelona because not a single major English-language news source reported on it.

According to the website for Vaga De Totes, Spain has seen many labor-related general strikes in recent years, but rarely do those acknowledge women's issues. The list of problems left out of the conversation, according to the site, includes (roughly translated from Catalan) "compulsory maternity," violence against women, "labor reforms that deepen inequality already faced by women" and the cuts to social welfare and utilities that "increase the hours women devote to the care and attention of people."

While may have read about Spain's three-day student strikes that also took place this week, you probably what you didn't read that Wednesday's Vaga De Totes ("Everything Strike") brought together more than 600 different feminist and community groups over the course of a year of organizing that culminated in one riot grrrl-like takeover of Barcelona.

The background: Organized protests have been rippling across Spain for weeks in reaction to the country's ongoing economic crisis. Youth unemployment is an ongoing problem: For those under 25, it's nominally 50%, and Spain's current crop of recent graduates, considered the most educated the country has ever had, faces the greatest rate of unemployment in Europe. "An entire generation is being sacrificed in countries such as Spain," Ludovic Subran, chief economist at credit insurer Euler Hermes told Bloomberg News. "That has a real impact on productivity in the long run."

In the case of Wednesday's protests, it seems that Catalan women are tired of holding up everyone else without getting something in return.

The protests: Dolo Pulido, a member of the Vaga De Totes organizing coalition, told Catalan news site Directa the theme of the strike was "Women move the world, together we will stop it," but that the strike was about more than a work stoppage. "It responds to the feminist analyses that critique that the world is organized in a patriarchal system, and women assume the tasks to move it along," Pulido told Directa.

According to Directa, the protesters occupying the Cercle d'Economia read a manifesto denouncing the role of "this circle of the powerful in perpetuating a devastating market system which undermines both social justice and gender equality." The protestors also decried statements made by Monica Oriol, the leader of the related group Circle of Entrepreneurs, who said in early October that she preferred to hire women over 45 or under 25 to avoid "the problem" of pregnancy in business.

By evening, the street protest had amassed what looked like thousands of people. Most were young women, but all genders and ages appeared in the photos circulating on Twitter. At 6 p.m., the Stop Pujades ("Stop Increases") action held open the doors of subway trains in three different stations to protest fare increases in public transportation. By 7:30, feminist blockades had stopped traffic at four points in the city: la avenida Meridiana, la Gran Via, la avenida Diagonal, and el Paralel.

While marching to la Gran Via, feminist activist Laura Lozano told Spain's El Diario that many women can't attend the usual labor strikes because they are combining "several very poorly paid jobs" in order to survive. "We are the ones who suffer the effects of the crisis," Lozano told El Diario. "Cuts in health and education harm us much more, because women are the ones used to taking care of dependents, be they small or large."

Vaga De Totes says they are organizing an even bigger women's strike in the spring of 2015. Maybe by then, the international press will have learned to care about masses of women marching through the streets.