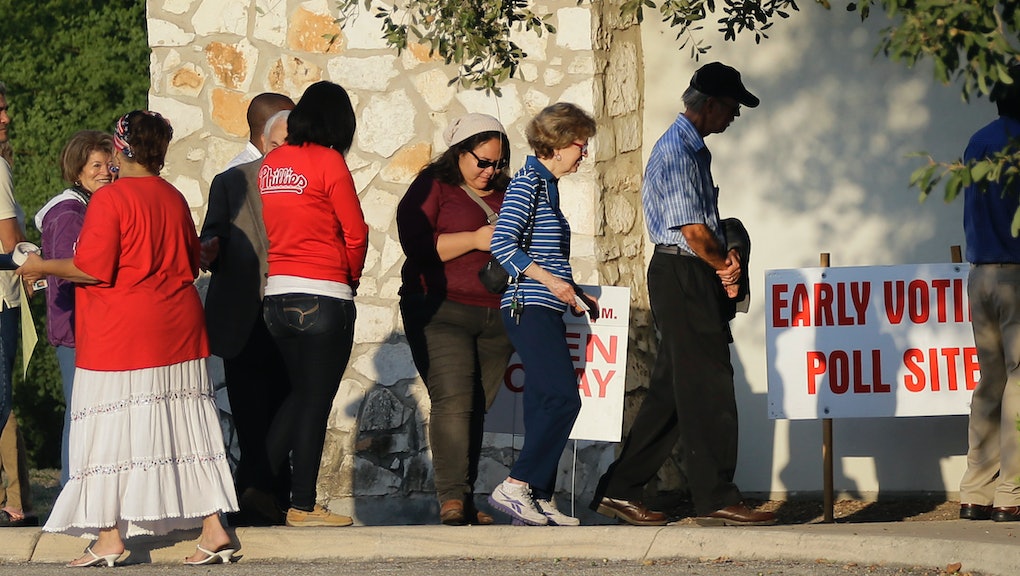 If the voter ID law in Texas didn't seem ridiculous enough, here's another example of its effect to add to the case against it.

A 93-year-old veteran in Houston was attempting to cast an early vote, but was turned away from the polls because his driver's license had expired, according to Think Progress.

The unidentified man was a registered voter. He had identification, but his license was out of date. He offered up other forms of photo ID, but those were not considered valid under the new law, which only acknowledges seven specified forms of government-issued identification.

Election judge William Parsley, who was present at the polling place, pointed out that "he has only seen one potential voter turned away at his polling location" in downtown Houston since early voting began six days ago, according to Think Progress. Still, one voter is one too many.

The background: The new Texas voter ID law requires voters to present government-issued ID in order to vote. According to proponents, the law will prevent voter fraud, but others argue that the law discriminates against citizens without photo IDs, many of whom are minorities or elderly.

The Supreme Court allowed the controversial law to go ahead in the midterm elections, but not without a scathing dissent from the court's strongest liberal voice, Justice Ruth Bader Ginsburg, who joined Justices Elena Kagan and Sonia Sotomayor in opposing the law. Ginsburg's dissent took no prisoners:

The greatest threat to public confidence in elections in this case is the prospect of enforcing a purposefully discriminatory law, one that likely imposes an unconstitutional poll tax and risks denying the right to vote to hundreds of thousands of eligible voters.

This latest case seems to prove Ginsburg's point. According to Parsley, the elderly veteran "just felt real bad, you know, because he's voted all his life," Think Progress reported.

Unintended consequences: Proponents of the law argue it was a well-intended effort to curb voter fraud, and that may be the case. But as this one example illustrates, the law actually prevents people from voting who should be able to. When a 93-year-old veteran and registered voter is turned away, eyebrows are undoubtedly raised and questions need to be asked.

Although one person in six days may not seem like much, early voting has just begun, and once the election gets into full swing the numbers will likely rise. According to Think Progress, poll monitors in Houston have already seen other registered voters being turned away.

Election judges told the 93-year-old man that if he wanted to vote in this election, he would have to renew his license. But that man's expired driver's license isn't the problem. The new voter ID law is.