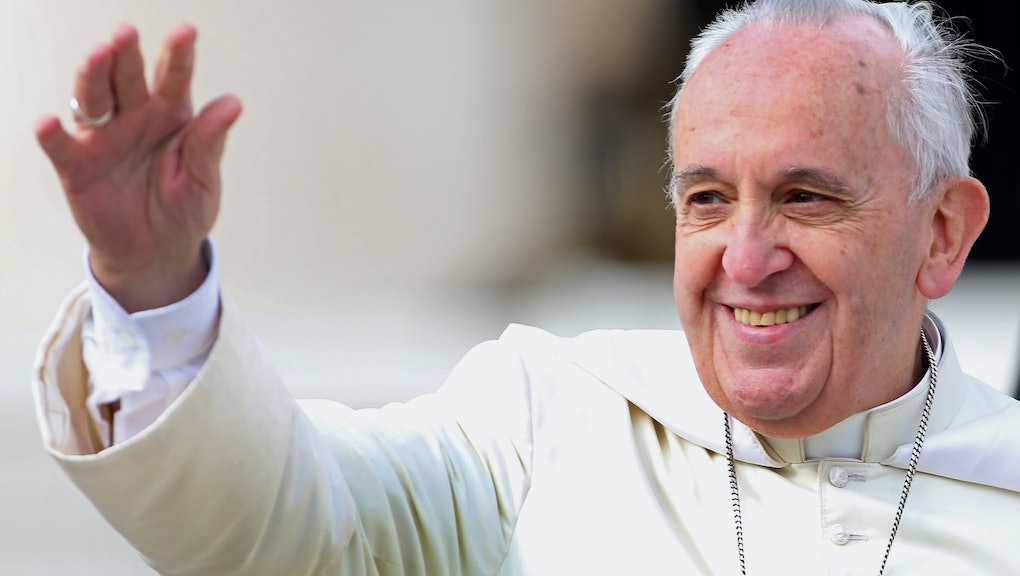 Pope Francis Has an Inspiring Message About Science and Religion

Pope Francis doesn't see a contradiction between God and science — in fact, he welcomes their coexistence.

Speaking at the Pontifical Academy of Sciences on Monday, he stressed that a creator can be present alongside the Big Bang and the theory of evolution. "Evolution in nature is not inconsistent with the notion of creation, because evolution requires the creation of beings that evolve," he said. "The Big Bang, which today we hold to be the origin of the world, does not contradict the intervention of the divine creator but, rather, requires it," he said.

He cautioned against relying entirely upon creationist theory, because God was not "a magician, with a magic wand able to do everything."

He underscored his belief that not only is scientific theory compatible with the idea of a creator, the two must have worked together in order to put us here.

Following tradition: The Pope's message is a welcome change from the anti-science rationale of some faiths, but it's actually not as groundbreaking as it might seem. Though the Catholic Church has a murky history with science — remember what it did to Galileo? — recent years have brought about a more progressive view.

As the Independent points out, Pope Francis's statements are more in line with those of Pope Pius XII and Pope John Paul II; Pius XII warmed to the idea of evolution and supported the Big Bang theory, while John Paul II believed evolution to be "an effectively proven fact."

That screeched to a halt with Pope Benedict XVI. Pope Francis's predecessor wasn't quite as fond of these ideas. In 2005, Cardinal Christoph Schönborn, who studied under Benedict XVI, wrote an op-ed in the New York Times arguing that "Evolution in the sense of common ancestry might be true, but evolution in the neo-Darwinian sense — an unguided, unplanned process of random variation and natural selection — is not."

Pope Francis's remarks, then, are a welcome change, and are yet another example of his dedication to progressive issues, which we've seen in his attitudes toward gay marriage and celibacy for priests.

Never fear, scientists of the world — the Pope is on your side.