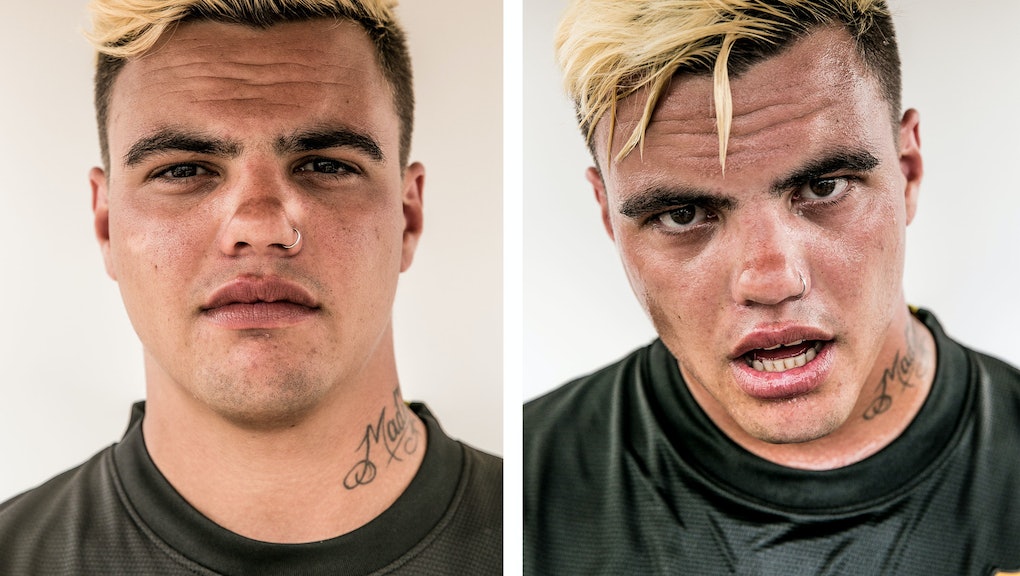 There is nothing easy about being a musician. Competition is cutthroat. Records sales and artist earnings are perilously low for many professional musicians who aren't yet famous. To build followings, artists have had to stretch to some ridiculous heights to promote their work. Yet musicians still find themselves fighting stigmas they've fought since the beginning of recorded music: that their work is not a "real" job and that they're unwilling to seriously dedicate themselves to anything but drugs and sex.

Anyone who is a musician or actually knows musicians understands all these stereotypes are egregiously false. It takes hard work and faith to be a musician, and it's hard work of every kind — emotional, intellectual and physical. No one unwilling to work harder than ever before will ever make it in this musical climate. And rarely has that been clearer than in this portrait series from photographer Brandon Andersen.

Andersen's Before and After is a series of diptychs, each made of two portraits. One is taken before the musician took the stage at this year's Vans Warped Tour. The other is taken after the artist finished their set, having expended all their energy trying to move a crowd. In all those flushed faces, sunken eyes and sweat-filled beards one can see how much of themselves each of these musicians leaves out on stage while they work.

Ryan Murphy, To the Wind

"It's not a new concept," Andersen told Mic of the before and after style, "I saw it had been done with hockey players by this famous Russian photographer, and I thought, 'Oh that's cool I'd like to take my spin on it.'"

Andersen drew on his experiences as a life-long music fan. He could never play an instrument or sing all that well, but through his camera he could give life to the form he loved. When asked to cover the Warped Tour, he resolved to not just go the standard press photo route. He would really try to measure the energy it takes to put on a killer show.

All the musicians Andersen pitched the idea to were eager to participate, but they knew it wouldn't be pretty.

"One of them was like, 'Are you sure you wanna do this, man? I'm usually throwing up when I get off stage.' I said, 'Even better if you throw up. That sounds cool.'"

"These dudes may break even off touring and merchandise sales, but they're literally just grinding, going out as much as you can, getting as many people as they can to seem them," he said.

"That's how everyone I know does it," he mused. "They put their heart into something, and they try to share it with the world."

All images by Brandon Andersen. Used with permission.