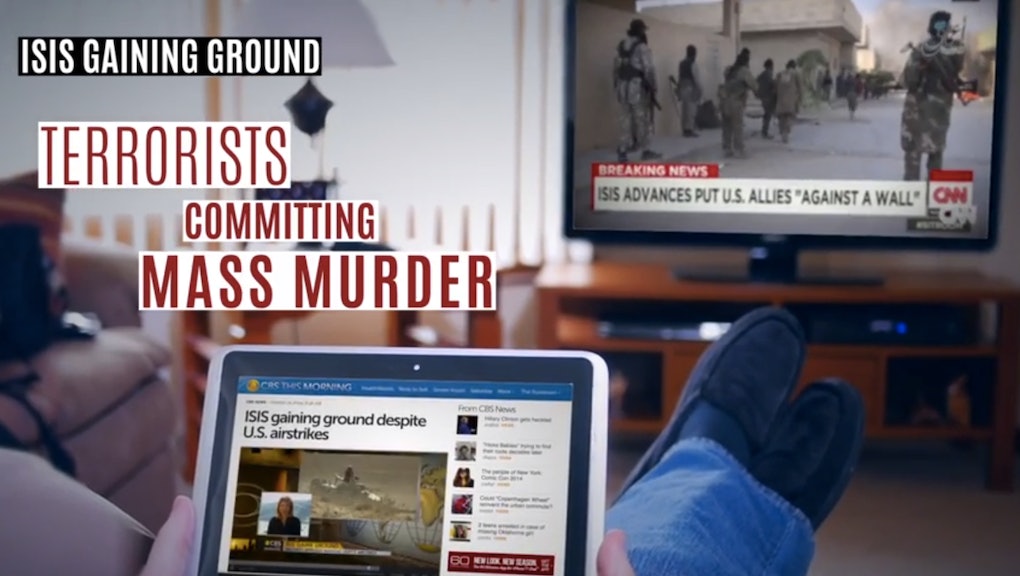 The news: The Republican National Committee wants you to know that, between Ebola, the Islamic State, the closure of Guantanamo and the torch President Obama is holding to the U.S. Constitution, you should be very, very scared of all the spooky things happening this election season.

Here's the RNC's terrifying vision of what will happen if you don't vote Republican during the midterm elections:

From the headlines blaring "ISIS gaining ground" and "U.S. allies 'against a wall'" to ominous warnings about Ebola in the U.S. and a picture of a jetliner set against the words "NATIONAL SECURITY," the GOP wants you to know it is the only thing standing between you and Obama's treasure trove of hair-raising horrors.

As noted by Bob Cesca over at the Daily Banter, the ad even comes with Obama standing before what looks like a blood-splattered wall:

Republicans everywhere are getting into the holiday spirit: The RNC isn't the only Republican group pushing a Democratic victory as the scariest thing that could happen this Halloween. Conservatives in Congress including Ted Cruz, Scott Brown and Pat Roberts have all rung the alarm bells on Ebola, which, according to them, is also a potential bio-weapon for ISIS and a border security issue.

All through the autumn, the GOP has hoped it's been more than the breeze that sends a chill down your spine. Here's New Hampshire's Scott Brown, who claims ISIS threatens to "cause the collapse of our country":

According to the GOP, Arizona's Rep. Ann Kirkpatrick (in conjunction with the ghoulish Rep. Nancy Pelosi) is letting the terrorists sneak in across the unsecured border:

Over in New Mexico, GOP Senate candidate Allen Weh ties together knife-wielding ISIS terrorists, the border crisis, and the president's golfing into a terrifying tale:

The National Republican Congressional Committee targeted Pennsylvania Democrat Brad Ashford with this ad not so subtly implying that if you elect him, your entire family will be murdered:

Michigan Republicans think that Democratic Senate candidate Gary Peters has "dark clouds" and loan sharks swirling around him as he conjures up a sharknado:

But if scary movies alone aren't enough to make your teeth chatter, the GOP has plenty of ghost stories to serve up. There's Arkansas' Tom Cotton, who claims ISIS collaborates with Mexican drug cartels on the border, North Carolina's Thom Tillis, who warns of a full-scale cross-border Ebola epidemic in the U.S., and even Kentucky's Rand Paul, who weaves an ominous warning that returning U.S. troops from West Africa could spread the deadly fever. All across the country, Republicans are undermining faith in the government's ability to keep citizens safe as a political ploy.

Thanks to Republicans, it looks like we're going to have a truly terrifying Halloween. But the really spooky thing is that the scare tactics might be working. Recent polling shows that the GOP has an edge leading into next week's midterms, which should frighten any Democrat.