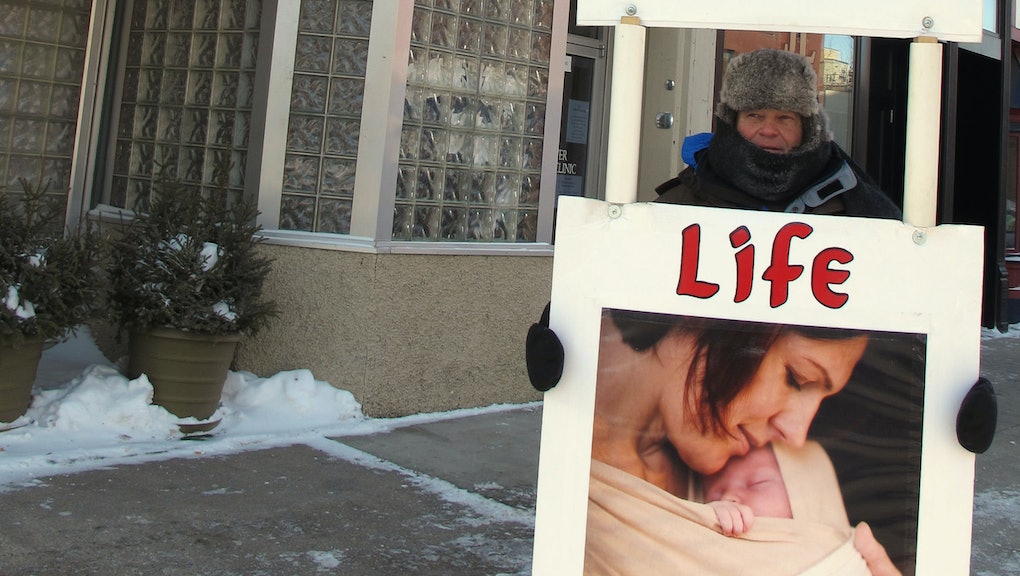 If You Care About Abortion Rights, Watch These 3 States on Election Day

Colorado and North Dakota have "personhood" amendments on the ballot, which would change the states' constitutions to legally define the start of life as the moment of conception. Tennessee's amendment would pave the way for passage of anti-abortion legislation down the road. People on both sides of the issue are worked up, and opinions on how the votes will turn out are divided, but one thing is clear: The amendments would be a disaster for women.

Although ballot measures of this sort haven't fared well in previous elections, Mother Jones notes that "states have approved more anti-abortion measures during the past three years than during the entire preceding decade." This year, proponents are giving it another shot.

Here's a breakdown, state by state, of what's on the ballot, what the fight is about, and what it all means:

The initiative: Tennessee's proposed anti-abortion amendment would make obstacles to legal abortions easier to approve in the future. A 2000 Tennessee Supreme Court ruling placed the decision of whether to end a pregnancy under the protection of women's privacy rights, which has made it tough for Tennessee to pass anti-abortion legislation. The ruling would hold less weight if this amendment passed.

What both sides are saying: Proponents have voiced concerns that Tennessee is the "abortion capital of the Bible Belt," citing the statistic that 23% of abortions in the last year were for non-Tennessee residents, the New York Times reported. Other states in the region do not have the constraints of Tennessee's Supreme Court ruling. Mississippi law, for example, requires women to go through counseling and wait 24 hours before an abortion is performed. Hence, women travel to Tennessee, which doesn't have any such laws.

But opponents attribute this statistic to the state's location and the frequent travel of residents from the surrounding eight states to Memphis. They also point out that the 2000 ruling hasn't stopped abortion regulations from being put into place. In 2012 the state passed a law "mandating that physicians who perform abortions have admitting privileges at a local hospital," the New York Times said.

What chances it has to pass: Mother Jones predicted that the fight over this amendment would likely "become the most expensive in the state's history." But despite the financial investments from both sides, Tennessee's tough rules for passing constitutional amendments might make more of a difference. An amendment not only has to receive a majority vote; the New York Times noted that it also "must receive more than half the number of total votes cast in the governor's race – a bigger challenge."

The initiative: Colorado's Amendment 67 is a modified version of the personhood amendment that the state has put on the ballot in years past. The amendment would "redefine the terms 'person' and 'child'" to include fetuses in the "state's criminal code and wrongful death act," the New York Times reported. The amendment would also impede access to some methods of contraception and could put women who have miscarriages and their doctors at risk of being prosecuted.

What both sides are saying: Supporters say this amendment would correct a loophole in Colorado law and "has nothing to do with abortion," Mother Jones said. Rather, they say it's designed to ensure that anyone who harms an unborn child will be prosecuted. The amendment initially arose after an accident caused by a drunken driver resulted in the death of a fetus. The driver was charged for vehicular assault and driving under the influence, but couldn't be charged for killing the fetus because unborn children were not considered a separate person under Colorado law.

Those opposed to the amendment say it's giving fertilized eggs the same legal rights as born people. With this amendment put into law, abortion would be criminalized even in cases of rape, incest or endangerment to a woman's health.  Despite proponents' claims, the amendment would not protect women, according to the New York Times. Rather, it would likely do the opposite.

What chances it has to pass: Although the amendment has been modified from previous versions that were put on the ballot in years past, Colorado voters "overwhelmingly rejected" the proposal in the 2008 and 2010 elections, the New York Times reported.

The initiative: North Dakota voters will be voting on a personhood amendment similar to the one on Colorado's ballot. The amendment would ban abortion in almost all cases, outlaw some common forms of birth control as well as stem cell research, and restrict in vitro fertilization. Unlike Colorado's amendment though, the North Dakota amendment wouldn't call up the criminal code. Rather it would alter the constitution's language to ensure the protection of the "'life of every human being at any stage of development,'" the New York Times said.

What both sides are saying: Proponents say this amendment would boost protection for both mothers and fetuses to make sure they are "both treated as medical patients," the Huffington Post reported. The amendment would protect existing anti-abortion laws from being overturned, which is important to supporters in the state because two laws restricting abortion were proposed last year.

Opponents are leery of the amendment's vague wording, which many think could lead to legal battles down the road. The passage could also open the door for a future abortion ban, complicate access to birth control and potentially criminalize miscarriages.

What chances it has to pass: North Dakota has historically been opposed to reproductive rights, according to the New York Times, and the state currently only has one abortion provider. Last year, the state proposed two anti-abortion laws. Out of all three states, this one probably has the best chance at passing.

If any of these three amendments pass, it wouldn't be the end of the road for anti-abortion measures; it would likely be just the beginning. And although none of these amendments necessarily spell the end of legal abortion, they open the door for that possibility in the future.